Home Blogs Chemicals and the Economy German New Olders have cash to spend, but few companies bother with their needs

German New Olders have cash to spend, but few companies bother with their needs 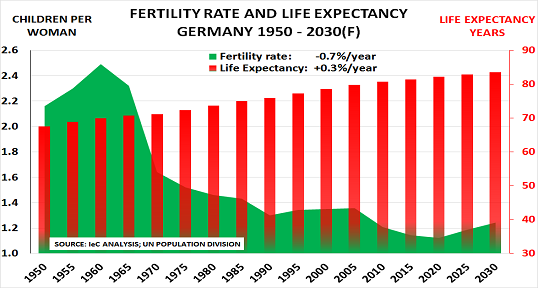 Germany is the world’s 4th largest economy ($3.4tn), and so is the next to be studied in the blog’s series on the impact of demographics.  Its population is almost as old as Japan’s: Germany’s median age is 45.7 years, compared with Japan at 45.8 years.  The reason is shown in the chart above:

Germany is therefore heading in the same direction as Japan in terms of the proportion of its adult population who are in the New Old 55+ generation.  1 in 3 people used to be in this group during the SuperCycle, but already today the figure has jumped to 40%, and will rise to 1 in 2 adults within the next 10 years.

This means that, like Japan, it has historically seemed hard to persuade people to increase their spending.  They already have most of what they need in terms of basic products, and so the country’s economy has instead become focused on exports.

Data from the OECD Pension Book continues the parallel with Japan:

The parallels with Japan end at this point, as Germany has an extremely generous pension scheme.  Although too complex to summarise here, the OECD calculate it equates to 52% of median earnings.  In addition a ‘safety net’ system provides generous means-tested benefits from social assistance.

But they are not spending it at the moment.  This may be partly due to understandable concerns over their future income levels.  But it probably also reflects the fact that companies have made very little effort to focus on the needs of this rapidly expanding sector.

It seems highly likely, to the blog at least, that Germany’s New Olders would be happy to spend more if companies started to develop products and services aimed at meeting their needs.  But for the moment, youth-obsessed marketing professionals continue to chase after the wrong market.

It made some sense for German companies to focus on export opportunities when there were still plenty of Wealth-Creators outside Germany.  But now the New Old are starting to dominate these markets as well, an export-led strategy is going to prove very hard to sustain.