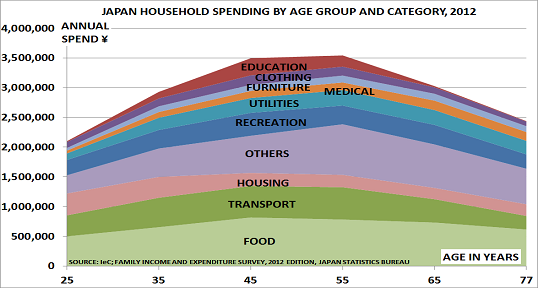 Every parent believes their children are above average – more beautiful and intelligent than anyone else’s.  Economists have a different mind-set in their work at least, as most focus on trying to identify the ‘average person’.  Biologists start from a different perspective again, as their research has led them to discover the concept of ’competing populations’.

Which concept makes more sense as the basis for corporate strategy?  The blog has children, but has to admit there might possibly be other children, somewhere, who are more beautiful and intelligent.  And in decades of travelling to most countries and regions of the world, it has never yet met an average person.

But the biologists’ concept makes a lot of sense.  Household consumption is between 60-70% of GDP in all Western economies.  And we can all see in our daily lives that people’s spending habits change with age:

The economists who run central banks and economic policy deny this matters.  Instead, they believe in the life-cycle hypothesis as set out by Franco Modigliani, who won the Nobel Prize for his work in 1985:

The hypothesis thus assumes that people know how much they will earn during their lives, and how long they will live.  In turn, this means that the right mix of tax and spending policies can always create constant growth.  And it became the basis for economic policy during the 1983-2007 SuperCycle.  If inflation rose a little, due to excess demand, central banks would raise interest rates until inflation fell.  In turn, this created the concept of ‘pent-up demand’, where any slowdown was only temporary and would be followed by a quick bounce-back.

Since 2008, policymakers have been trying the reverse policy, of reducing interest rates and flooding markets with low-cost money via Quantitative Easing.  But demand is still weakening, whilst inflation is slipping into deflation.  So far, however, they refuse to accept the obvious conclusion, that the theory is wrong.  Yet common sense would surely suggest that none of us dare to make any assumptions about our life expectancy, or about our future income.

But if the ‘life-cycle hypothesis’ is wrong, there can’t then be a ‘right’ policy mix that will maintain constant growth.  Equally, monetary policy can’t stimulate growth.

Maybe, therefore, the biologists are right.  Their theory at least fits the economic facts as we observe them today – slow demand and potential deflation, despite massive central bank stimulus.

We also have the example of Japan to guide our thinking, as the above chart shows:

Thus common sense thinking about spending is confirmed by official data.  An ageing population will inevitably have low or negative growth, and probably deflation rather than inflation.

External factors can, of course, shift the balance temporarily.  If there are plenty of younger people in other countries, and they have good incomes, then low domestic growth can be compensated by strong exports, particularly if the exchange rate is kept weak.  Equally, if a country can attract lots of well-educated and hard-working immigrants, then they will also help to restore the balance.

History shows that Japan did the first, with its exports of electronics and cars.  This boosted growth when Western BabyBoomers were in their peak spending mode.  But today one in three US adults are already in the New Old 55+ generation, and this proportion will reach 40% by 2030.  So sustained export-led growth is no longer possible.

Equally, Japan cannot achieve growth via immigration, as it has rejected this option many times.  Instead its population is now in long-term decline.  Official UN forecasts suggest it will fall from 127m in 2010 to 120m in 2030, and to 108m in 2050, despite increasing life expectancy.

Modigliani’s theory appeared to work for 25 years between 1983-2007.  But this was pure coincidence.  It just happened to be applied in the Boomer-led SuperCycle, when the largest and wealthiest generation in history were joining the Wealth Creating 25 – 54 age group.  It thus doesn’t work today as the Boomers join the New Old 55+, as we can see from the lack of any ‘pent-up demand’.

The blog would therefore respectfully suggest that companies need to abandon the SuperCycle mode of business strategy, which forecast growth in relation to IMF GDP predictions.  Instead, they need to refocus on how to profit from the biologists’ concept of competing populations and develop a Scenario-led approach.

This requires developing strategies to produce affordable goods and services to meet the needs of people in different age ranges, and with different incomes.  This requires a very different mind-set, and is not easy to achieve as it may well require major parts of the business to be repositioned.

But the alternative of continuing to hope for a return to the SuperCycle will simply leave the business in a dead-end.  And Boards may well then find there is no way back, as yesterday’s profits turn to tomorrow’s losses.