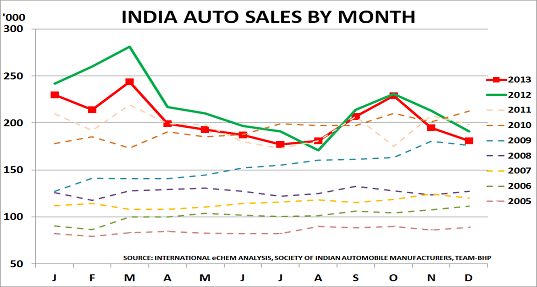 Since 2009, the 4 BRIC nations (Brazil, Russia, India and China) have been the focus of every car manufacturers’ dreams.  Whilst the West worried about ageing populations and its financial crisis, the BRICs seemed to have moved into a new dimension.

Today, however, reality is beginning to set in:

India’s position is particularly disappointing.  Only recently, it was being billed as ‘Incredible India’.  It was expected to become a second giant Asian market, after China, within a few years.  But today, the failure of reform efforts and endemic corruption have instead caused inflation and stagnation.

Of course, there are still opportunities within the market for a targeted approach, as the blog discussed in October.  Some companies, who understand that sales depend on income levels and age range are still doing well.

Thus Ford always intended Its new low-cost EcoSport model to be manufactured in Inda for both domestic and export markets, as we discussed in chapter 8 of Boom, Gloom and the New Normal.  Its new capacity is now starting to come online, and  is being used as a  low-cost export hub for sales to S Africa, Aruba and Taiwan.  The next stage will be to ship cars to 50 countries, including Europe, Taiwan and Australia.

Ford never believed the myth that India, with average incomes of just $1k/person, was somehow about to become ‘middle class’.  Now its new capacity will provide increasingly tough competition for manufacturers in other countries via its ‘design to cost’ business model.