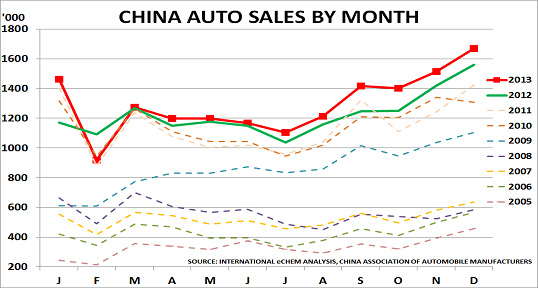 China’s auto sales moved past Europe’s in 2010, and are now close to US levels.  But even China is not expected to maintain this surge in 2014.  As the chart above shows, sales soared in the past few months (red line) versus 2012 (green).  But as the automotive association explains, this was mainly because:

“Panic consumption over vehicle purchase limitations in more cities helped drive sales in the city clusters in the Beijing-Tianjin-Hebei region, the Yangtze River delta and the Pearl River delta.”

The problem, as the blog has discussed before, is pollution.  China’s economic surge has meant its atmosphere has become horribly toxic in many of its major cities.  Its burning of coal and factory emissions are major causes.  But auto emissions also play their part.  As Shi Jianhua, an auto association vice secretary general told Bloomberg, “vehicle sales in China are facing pressures brought on by environmental protection, traffic jams and more cities limiting purchases.”

Shi also warned that “demand for imported luxury vehicles will surely decline as the official frugality campaign spreads beyond the government and affect companies and individual consumers.”  Already, for example, China’s military have been banned from buying foreign cars – and they bought over 500k foreign luxury vehicles in 2012, primarily from Mercedes, Audi and BMW.

The World Health Organisation has rated China’s outdoor air pollution as a carcinogen for the first time, due to its links to lung cancer and increased risk of bladder cancer.  And as a result of public concern, Tianjin has joined Beijing, Shanghai, Guangzhou and Guiyang in imposing vehicle quotas.

Auto manufacturers and analysts are, of course, still optimistic about the 2014 outlook.  But tyre sales seem to be weakening, with inventories of rubber in Shanghai at their highest level for 10 years.  Plus, of course, there are growing signs that the new leadership, fresh from its success at the 3rd plenum in November, may be finally about to crack down on China’s lending bubble.

This of course highlights the key problem with the whole BRIC ‘miracle story’ since 2009.  It was not due to superior demographics or economic policies.  Instead it was simply the result of a panic over loss of exports to the West.  Governments simply didn’t want to accept that the world had changed.  So they decided to take the seemingly cost-less solution of replacing this lost demand via a massive lending bubble.

Despite China’s sales surge, global auto sales actually fell in November.  This, along with the slowdown in BRIC auto sales, may well be a early warning that the bill for this lending binge is starting to become due.  Investors in the Shanghai stock market certainly think so.  It is now trading at its lowest-ever price/earnings valuation of just 7.9.