The trend is your friend until it isn’t – part 2 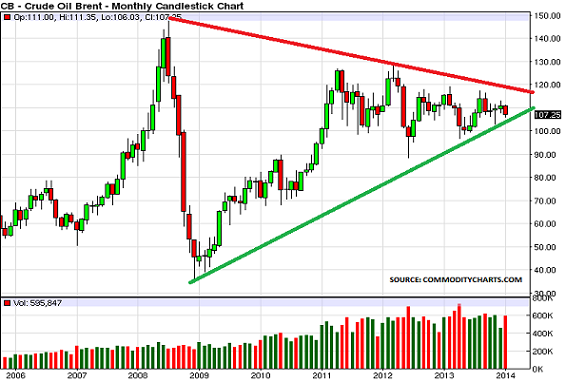 “May you live in interesting times” is a Chinese proverb which has an alternative meaning as a curse.  And the blog suspects this duality of meaning may start to make a lot of sense as we go through 2014.

We have, after all, been in a very strange world for the past 5 years.  Markets have lost their role of price discovery, due to the weight of stimulus money being pumped out by governments.  Thus as the New York Times (NYT) notes, the S&P 500 – the world’s most important stock market index, has just finished a most unusual period:

“It symbolizes the lighter-than-air quality of the stock market over the last two years. Now, with stock valuations beginning to be stretched and the Federal Reserve starting to taper its loose monetary policy, an enchanted time for stock investors may be coming to an end.”

Another does of realism, this time about US shale gas and ethylene markets came last week from Stephen Pryor, president of ExxonMobil Chemical, when noting:

“The reality is the US from a chemical standpoint is a very mature market. We have some demand growth domestically in the US but it’s a percent or two, it’s not strong demand growth,” Pryor said, adding that polyethylene hardly grew in the US in a decade.  “That is not going to change…..

“Asia remains at the bottom of the cycle. We’ll be in a challenging environment for a while and the extent to which the shale phenomenon [in the US] will add to that challenge – that’s a fact of life too.”

This confirms the blog’s strongly expressed warnings since August, when it wrote that:

“US 2012 ethylene production was still below SuperCycle levels, as were volumes for the two major derivatives – polyethylene and PVC.  This highlights how lack of demand will make it very difficult to justify all the currently planned expansions.”

When markets are in an “enchanted time”, nobody bothers about reality, by definition.  Instead everyone knows “things are different this time”, and that the most important thing is to follow the trend as quickly as possible.

But now we are leaving this “enchanted time” and instead probably heading into “interesting times”.  Nobody can argue with Pryor’s analysis.  And it will surely lead to much head-scratching amongst senior executives and fund managers in the weeks to come.  “How did we miss this?”, they will ask themselves.

Equally, the chart above of Brent prices suggests oil’s “enchanted time” may also be ending.  How much longer will investors choose to ignore the reality of rapidly increasing supply, weak demand growth and high levels of inventory?  Oil’s return to reality could be painful indeed for anyone assuming $100/bbl prices would last forever.

The triangle shape is now very narrow indeed, suggesting a breakout – either higher or lower – is getting close.  And as the blog warned last month, the trend is your friend, until it isn’t.

Benchmark price movements since January 2013 with ICIS pricing comments are below:
PTA China, down 17%. “Operating rates have started to be adjusted down to ease the oversupply, especially in the key China market”
Benzene Europe, down 7%. ”Continued high pricing in the US is helping support the European market”
Brent crude oil, down 4%
Naphtha Europe, down 1%. “Arctic chill and subsequent refinery outages in the US raised expectations of increased demand from the gasoline sector”
HDPE USA export, up 14%. “ In Asia, many plastics processors are unwilling to build up inventories ahead of the week-long Lunar New Year holiday. However, there is interest from South America”
US$: yen, up 19%
S&P 500 stock market index, up 26%