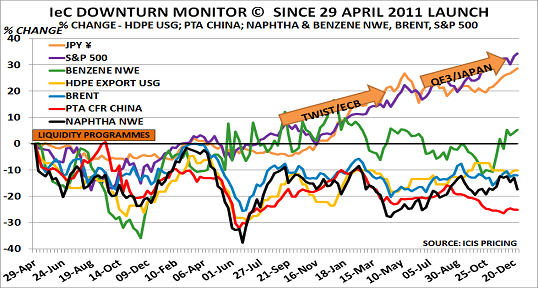 Intuition’s great benefit is that it provides a different perspective.  Thus the intuitive concept behind the launch of the IeC Downturn Monitor was that April 2011 would prove a watershed moment for policymakers’ Recovery Scenario after 2008’s financial crisis.  Their Scenario essentially had two elements:

Policymakers’ first target was achieved by April 2011, but the second target looks as far away as ever as the chart shows for the benchmark portfolio:

The worst result has been in China.  Its prices for PTA (red), the raw material for polyester, have fallen 25%.  But naphtha (black), the main feedstock for Asian and European petchems, has also fallen 17%.  Whilst Brent oil (blue) has fallen 12% as the ‘correlation trade’ has begun to unwind.  Even US polyethylene (orange) has struggled, with its price down 10%, despite benefiting from the shale gas boom.  Only benzene (green), with its supply greatly reduced by the downturn in refining and petchems, has seen prices remain in a more stable pattern.

2014 now sees policymakers in a race against time.  The major central banks have so far spent $16tn in boosting liquidity, whilst a total $33tn has been spent on overall stimulus efforts.  This money can only be repaid if growth does now start to return to SuperCycle levels.

We are thus at the T-junction described by PIMCO, the world’s largest bond fund manager.  One road leads to strong growth: the other to a world where lack of growth in the real economy leads to default in financial markets – either via major spending cutbacks and tax rises, or via an inability to repay the money borrowed.

The blog didn’t know how developments would play out when it first launched the Monitor nearly 3 years ago.  But the way the Monitor now highlights the dilemma we face, confirms the insight that intuition can provide.

Benchmark price movements since April 2011 are below with ICIS pricing comments, and the Monitor chart above:
PTA China, red, down 25%. “Sellers and buyers seeing squeezed margins because of high production costs, coupled with prevailing weak demand on poor downstream market conditions”
Naphtha Europe, black, down 17%. “Europe is structurally long on naphtha, and sellers need to export to the US gasoline and Asian petrochemical sectors to keep stocks in balance”
Brent crude oil, blue, down 12%
HDPE USA export, orange, down 10%. “ Interest was weak as most global buyers have made arrangements to purchase January cargoes and are in no hurry to pursue February material”
Benzene Europe, green, up 5%. ”Outlook for the upcoming month was less certain”
US$: yen, brown, up 29%
S&P 500 stock market index, purple, up 34%