Protectionism edges closer as US holds back on Fast Track Authority 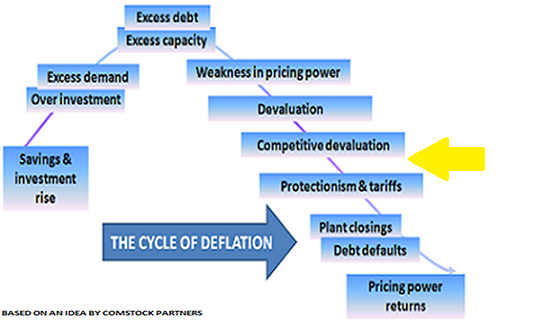 The mainstream media rather ignored a key event last week, namely that the Democrat leader of the US Senate signalled he would not try to pass Fast Track Authority to allow the President to conclude new trade deals with the EU and Pacific countries.   Nobody seems to want to face the unpalatable truth, that this means these deals are almost certainly dead in the water and will not happen.

Thus we have passed another tipping point, where we move beyond competitive devaluation towards protectionism and tariffs, as we continue along the Cycle of Deflation as shown above.

The blog has now become resigned to the idea that deflation has become inevitable.  Since it first began to use an earlier version of the above chart 5 years ago, we have moved 2 further steps through the cycle:

2010 saw the early stages of competitive devaluations, with Brazil’s finance minister declaring the world was starting to see “currency wars“.  Essentially currency markets recognised that low growth countries were trying to export their way out of trouble.

And then devaluation became an acknowledged tool to restore growth in October 2012, with the election of the Abe government in Japan.  As the blog noted a year ago,

“Japan has now woken up to the impact of the US Federal Reserve’s policy of ‘quantitative easing’ (QE)  on its export business.  As Barrons, the US investment magazine notes, the US “dollar is now down 17% against a broad range of currencies“.  Plus, of course, as the blog has noted before, QE has also helped to drive global oil prices to record levels – helping to add to the US’s shale gas cost advantage”

Since then, the yen has weakened 29% from ¥79 : $1 to today’s ¥102 : $1.  And as one would expect, a chart of the progress of the Nikkei stock index exactly matches the devaluation process.  But since New Year, as Larry Fink of Blackrock told the Financial Times yesterday:

“What we have seen is the unwinding of large hedge fund behavior.  The biggest problem, and I said this in Davos too, … is there are so many correlated trades worldwide. Everybody was long the Nikkei, short the yen…Most hedge funds are down five-ish percent who had those trades on”

This, of course is another sign of the fact that the QE programmes have caused markets to lose their prime role of price discovery.  Instead, everyone plays the momentum game and jumps on the central bank bandwagon, ignoring the real fundamentals that ought to drive pricing.

Rising volatility like this is a sign that the game may well be over.  If China’s central bank starts to take $1tn or more off the table, now the Lunar New Year holiday is over, then more and more correlations will start to break down, in all sorts of markets, including oil.

So it starts to become quite urgent that companies start to worry about all the potential side effects of this great unwinding:

All in all, we could be in for a very bumpy ride.  And the end result will be, the blog fears, that panicked governments turn to protectionism in a desperate effort to preserve employment.