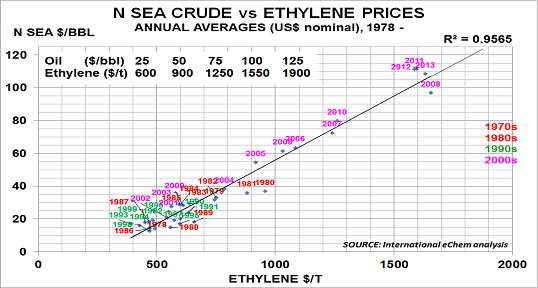 Companies are about to review their Q1 performance, and re-forecast profit and revenue for the rest of the year.  Most will be disappointed with results so far, as the long-promised economic recovery has again failed to appear.

This will be no surprise to blog readers.  But there is another and connected issue for Management Teams to worry about as we head into Q2.  This is the unnatural calm that has settled over the oil markets in the past 6 months, as the blog discussed on Tuesday.

What would happen to their business if oil follows copper and other commodity markets and starts to tumble?  Would it really stay within a narrow range, above $90/bbl?  This seems highly unlikely, given the enormous amount of speculative money tied up in the market.

And if it does fall below $90/bbl, what would this mean for the prices of the major petrochemicals?

This question can at least be answered with more than 95% accuracy, as the above chart shows:

The same rule applies to all the other major petrochemicals – propylene, butadiene, benzene and paraxylene.  The propylene correlation is 97%, butadiene is 90%, benzene is 92% and even paraxylene is 87%.

In the long-term of course, lower prices would be good for demand.  Consumers would have more discretionary cash to spend.  But oil producers have got used to today’s higher prices, and factored them into their budget calculations.  Riots, or worse, might easily break out in some countries if these budgets came under pressure from lower prices.

Of course, managements might just decide to ignore the issue, and hope the consensus is right to assume oil prices will never again fall below $100/bbl.  But history would suggest this is actually a very risky position to take.  Anyone without a Plan B might look very exposed, given the weaknesses now being exposed in the global economy.