Home Blogs Chemicals and the Economy Japan’s debt now $80k for every man, woman and child

Japan’s debt now $80k for every man, woman and child 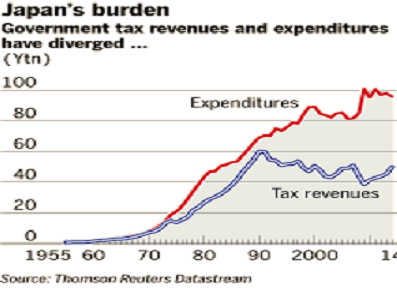 Question:  Why will Starbucks reduce the menu price for its venti green-tea frappucino in Japan next Tuesday, when the price is actually going up?
Answer:  Because the government hopes the lower menu price will fool people into thinking the price has gone down

It is, of course, a nonsense.  And no doubt most Japanese will be quite annoyed that their government thinks that they could be fooled so easily.  They will, after all, find themselves paying Y572 ($5.58) for their favourite tea on Tuesday, not today’s Y550, even though the menu says Y530.  Thousands of other retail businesses will be adopting the same tactic, under a new law passed last October.

But the reason for the tactic is even more worrying.  As the chart above shows from the Financial Times:

Or to put it another way, current gross central government borrowings equal 24 years of tax receipts.

Japan is thus a clear example of the way in which yesterday’s ‘demographic dividend’ has become ‘demographic deficit’.  And one sign of the seriousness of the situation is the Starbucks example.  Imagine how desperate the government has become, that it would even think of such a tactic, let alone pass a law to allow it.

The blog has argued since premier Abe came to power that his policies simply cannot work and are contradictory.  For example, one key policy is to devalue the yen.  This pushes up domestic prices and reduces consumption.  Yet a second policy is to increase GDP by increasing household consumption.

This kind of economic nonsense wouldn’t matter if Japan was an obscure country in the middle of nowhere.  But instead it is the 3rd largest economy in the world.  Even more worrying is that economic policymakers in the West think Abe is doing the right thing, and are now mirroring his spend and borrow policies.

Small wonder that some Japanese have now begun to rebel.  Last summer, voters elected a former fund manager, Takeshi Fujimaki, to Japan’s Upper House of parliament on ‘a platform of economic Armageddon’.  His view is that:

““A market crash is inevitable. The only question is what measures we can take today to lessen the damage.”  His argument was that “Japan’s debt was out of control, and it was only a matter of time before everyone dumped government bonds, sending yields soaring and the yen skittering all the way to 1,000 against the dollar”.

An early sign of Abe’s confusion came last year, when he replaced Masaaki Shirakawa as Governor of the Bank of Japan for arguing that today’s “low growth was mainly attributable to demographics, or more specifically, a rapid aging of the population”.

Thus there is nobody at the top of government to point out the risks that Abe’s policies are creating.  But Tuesday’s tax rise shows Shirakawa was right when Governor to warn:

“The implications of population aging and decline are also very profound, as they contribute to a decline in growth potential, a deterioration in the fiscal balance, and a fall in housing prices. Given that other developed countries will face the same problems despite some differences in timing and magnitude.”

Before too long, we may all find ourselves ordering a drink at Starbucks, only to find that the actual price has gone up.