Home Blogs Chemicals and the Economy World moves from Denial to Anger, as the Paradigm of Loss moves forward 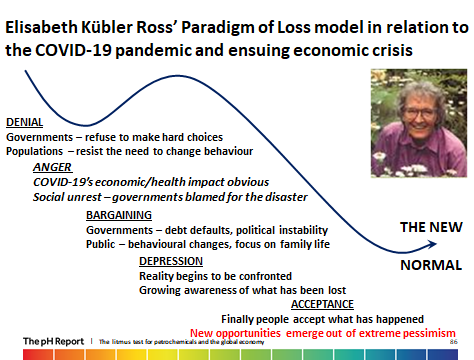 I have been warning about the Covid-19 risk since early February, and in April suggested here that:

“None of us have ever seen a health crisis on the scale of Covid-19 . Nor have we seen an economic crisis on this scale before. The best guide to what may happen is therefore likely to be the ‘Paradigm of Loss’ model developed by Elisabeth Kübler-Ross, to help explain how people react to a devastating change in their lives.”

The problem is that many governments have failed to protect their populations against the potential threat from a global pandemic.  Preparedness is key, as the UK’s comprehensive Pandemic Preparedness Strategy suggested in 2011.

And as the UK National Risk Register chart below showed in 2017, the government knew that the risk of a pandemic influenza was the most serious risk in the next 5 years – and was the most likely. 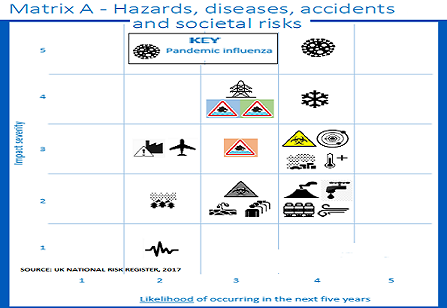 The reason for this exceptional level of risk was clearly stated in the Report:

The Report also accurately forecast the potential results of a pandemic, as its Conclusions show.

This data was well known to the medical authorities, as one would expect, with the UK’s chief scientific adviser telling Parliament on 17 March that:

“Keeping the number of deaths from coronavirus to less than 20,000 would be “a good outcome” of the Government strategy to battle the pandemic”. 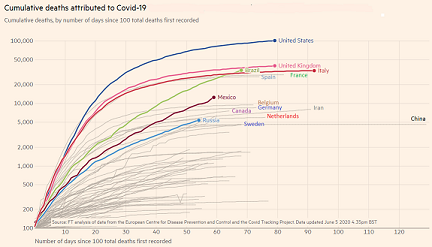 Unfortunately, as the chart from the Financial Times shows, the UK lost this battle sometime ago, with 40,000 people already dead from Covid-19 . Only the United States has a higher level of cumulative deaths.  And the real figure may be over 50,000, as the Office for National Statistics suggests many of the UK’s 13,000 “excess deaths” this year may well have been misdiagnosed.

The behaviour of Dominic Cummings, the prime minister’s chief of staff, has been the catalyst for the move into Anger.  71% of voters believe he broke the lockdown rules.  And as pollsters YouGov note:

“The public has so far been cooped up in their homes, feeling increasingly frustrated about the situation….majorities across all regions, ages, political persuasions and social grades polled by YouGov showed that they think that the Cummings row has worsened the Government’s hand.”

THE END OF THE BEGINNING

Public Health England data shown in the chart confirms that those aged “80 or older were seventy times more likely to die than those under 40” . The other groups of people at risk were those living in “more deprived areas” or who were Black, Asian or Minority Ethnic. And shockingly, half of all deaths have occurred in care homes due to the government’s decision to focus resources on hospitals.

This data confirms analysis already undertaken before the pandemic hit the UK. And it makes it very hard to understand why it was decided:

The UK government has continued to be casual in its economic response.  Vast amounts of money have been handed out, with seemingly little thought about whether it was really being directed to where it was most needed.

Of course, some optimists have suggested none of this stimulus money will need to be repaid. Instead, they argue, the Bank of England can simply delete the debt by pressing a computer key.  Others even suggest that taxes are also no longer necessary. Instead we can all enjoy wonderful levels of government services without any need to pay for them.

Or maybe not? Voters may instead discover that they, and their children, and their grandchildren will have to pay off all this debt for decades to come. If this does happen, more people may start to become very angry indeed.