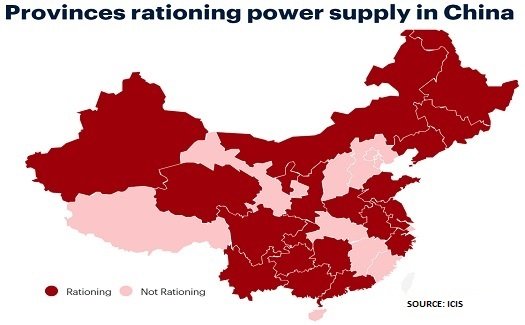 China is at the start of its biggest economic shake-up since 1978, when Deng Xiaoping launched his post-Mao reform programme. President Xi Jinping’s ‘Common Prosperity’ policy aims to retain his focus on increasing living standards. But it wants to spread the wealth far more widely.

The electricity rationing now underway across China highlights the need for reform, as the ICIS chart shows.

One cause is that China has been producing half of all the bitcoins made in the world. And bitcoin output currently uses the same amount of electricity as The Netherlands.

This highlights how some people in China are getting very rich, whilst others are without lights or heating. Unsurprisingly, bitcoin mining was banned last week.

After all, per capita wage income is currently just $3133/year, and 600 million people live on less than $150/month – and yet China also has more billionaires than the USA.

As I noted here last week, Xi’s aim is to abandon the land-driven development model that has skewed China’s development in favour of a wealthy few.

This is the background to his new policy. As the People’s Bank of China and other regulators insisted again last week:

“Housing should never be used as a short-term stimulus for economic growth”.

This is a complete reversal of the post-2008 position. It seems likely to have at least 4 main impacts on China and the global economy: 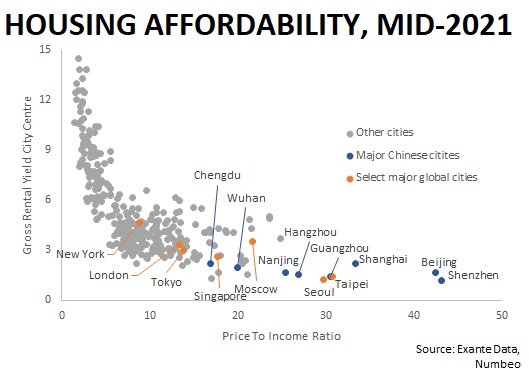 Xi’s policy shift has already wiped out $bns of value in China’s tech and education sectors. Now, with the bursting of the real estate bubble, he is moving to the next stage of his Common Prosperity reforms.  These will have a major impact on the global economy.

As the chart shows, China’s stimulus meant it has become the largest consumer of most industrial commodities – as well as plastics as my colleague John Richardson notes.  And so now, as China’s demand for them slows, other countries will find their economies slowing in a vicious circle.

Xi’s policy shift aims to ‘bring order out of chaos’, and echoes Deng’s ‘boluan fanzheng’ policy after the chaos of the Mao years. If he succeeds, China’s economy is likely to become much more sustainable. But in the short-term, the bursting of the real estate bubble will likely be very painful for China and the global economy for the next few years.

PREVIOUS POST The end of China's real estate bubble will impact global supply chains, exports and growth
NEXT POST An end to the China bubble would risk a Minsky moment