WILL BEIJING blink? The answer to this question could pretty much set the direction of the global petrochemicals industry over the next six to 12 months.

In my view, the question over whether the Chinese government will relax its clampdown on local real estate, which Bank of America estimates accounts for 28% of the overall economy, now overshadows the container freight issue, the vaccination crisis in the developing world ex-China and the strength of US economic growth etc.

And yet, remarkably, in my conversations with contacts over the last few days, hardly any of them flagged up China real estate and Evergrande as being their number one concerns. Some didn’t even mention the topics at all.

I think this comes from us being in this place many times before since 2009.  A seemingly overleveraged and highly speculative real estate sector has often looked likely to tip China into a crisis, according to the uber-bears.

But so far it hasn’t happen because Beijing has reacted by providing more liquidity for the property sector.

Most of the people I talked to therefore assumed that the government would blink again by rescuing Evergrande’s investors. They also assumed a more relaxed monetary policy over the next few months.

The people I spoke to were of course in the Asia and Pacific region and so most of them need no reminders of what is at stake here – just how important China is to the global petrochemicals business.

For some of them outside the region, however – who may be less familiar with China – the chart below is worth repeating. 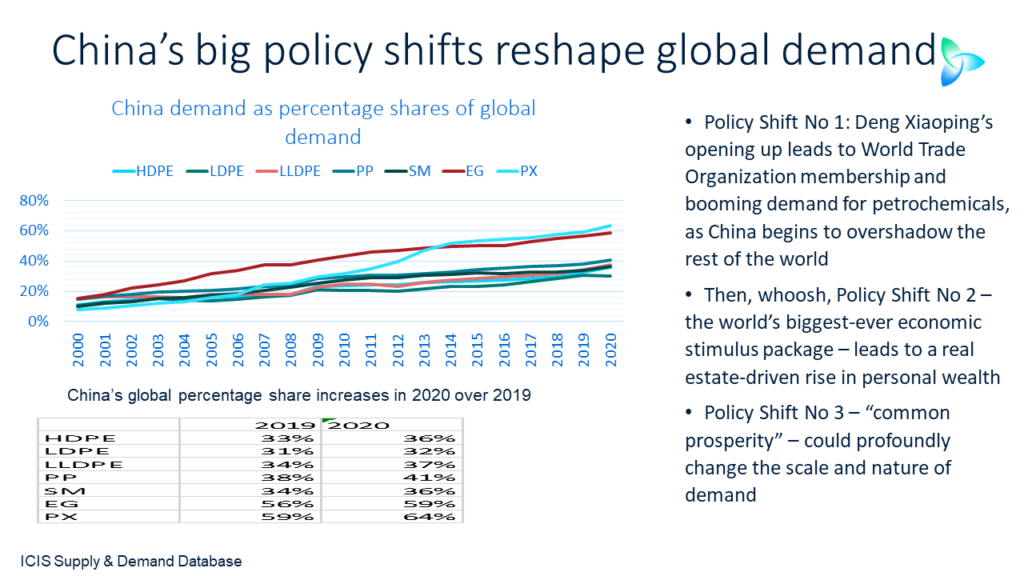 China went from shares of less than 20% of global demand in all these products in 2020 to the table you can see broken out at the bottom of the chart, showing global shares of demand in 2020 ranging from 32% to 64%.

No other country or region came anywhere close to being as important as China to global demand in 2020. In second place was the Asia and Pacific region at an average across the products of around 20%.

The increasing importance of China for our industry was largely the result of government policy decisions. This makes understanding and interpreting government policy a critical success factor for any petrochemicals business.

The big Policy Shift No 1 was Deng Xiaoping’s decision in the early 1990s to open up the economy. China’s integration with the global economy reached the point where in late 2001 it was allowed into the World Trade Organization.

This led to the removal of tariffs and quotas on exports to the West that had limited China’s ability to take maximum advantage of its low labour costs and excellent manufacturing infrastructure.

BANG, petrochemicals demand and imports went through the roof as China took much bigger shares of finished-goods export markets.

Policy Shift No 2 was the decision to launch the world’s biggest-ever economic stimulus package in late 2008 to compensate for the Global Financial Crisis.

At that time, there were fears that some 20m factory workers would return from their homes after the 2009 Lunar Year Holidays only to find that their jobs had gone. Hence,  the huge stimulus programme.

This triggered the Deng “get rich quick” motto on steroids –big increases in personal wealth and thus local-for-local petrochemicals consumption from 2009 until now. Greater wealth was largely driven by the real estate sector.

Periodically, as I said, since 2009 government officials have warned about the runaway property sector with waves of legislation introduced in efforts to cool it down.

But on each occasion “get rich quick” and concerns over declines in short-term growth have won out.

This included H2 last year when a surge in real estate investments helped China recover from the pandemic, thanks to more government stimulus.

Now, though, we could be seeing Policy Shift No 3, Xi Jinping’s “common prosperity” policy, which Caixin magazine said aimed to “reshape the societal structure from a pyramid-shaped structure to an oval-shaped one with the widest part representing the middle class”.

There is nothing new about “common prosperity” as a concept, it is just that it now appears to have moved centre stage, pushing “get rich quick” into the wings.

This is partly because a rapidly ageing population will require a big increase in tax collection to meet much greater healthcare and pension costs.

Personal income taxes were a mere 1.2% of GDP compared with 8.4% in the OECD. Public spending on health was relatively low at 2.5% GDP, said the magazine.

“Tax rates are high, but the number of people paying is small and compliance is inadequate. As a result, fiscal policy has played only a limited role in ‘moderating income inequality in China to date’, the IMF noted,” wrote The Diplomat.

“China’s real per capita GDP is predicted to increase from $10,687 in 2020 to $23,000 in 2035. In such a span of development, according to cross-national data, the average proportion of government expenditure to GDP increases from 26% to 36%,” wrote Cai Fang in an East Asia Forum article.

This indicated a huge leap in the expansion of the welfare state which would significantly narrow the big income gap, he added.

As I said on Monday, it would be ridiculous to attempt to cover all the angles of “common prosperity” in one post as there are so many angles.

This post, like Monday’s, will therefore confine itself to more short-term implications of this potential major policy shift and the fallout from any debt default by Evergrande.

In a later post, I will assess China’s chances of success if it sticks to its new approach and what this would mean for our industry.

“This time around the policymakers seem to be more persistently sticking to their credit control measures,” Helen Qiao, head of economic research for Asia at Bank of America told the Financial Times.

She said that this year’s economic slowdown was “mainly induced by policy tightening”.

A sign of just how serious China was about its bold new wave of economic and social reforms was the $1.1tn wiped off the market value of China’s top six tech stocks, following regulations and fines imposed on Alibaba and DiDi etc, wrote Kevin Rudd, former Prime Minister of Australia, in an article for the Asia Society Policy Institute.

These market losses didn’t include losses in the equities of food delivery, education, transportation, entertainment and video gaming companies following other government measures, he added.

But supporting the idea that Beijing will blink is that the economy is also losing momentum because of slowing exports on container and semiconductor shortages and renewed pandemic lockdowns.

Maybe, as I said, it will rescue Evergrande by bailing out investors while easing broader lending conditions.

Perhaps not, though. Evergrande could be rescued, but at the expense of the investors.

The property developer could become a state-owned enterprise with both onshore and offshore investors taking the pain, while the company’s land and property is sold off to the general public at discounted prices, some wise China hands have told me.

They said that such an approach would be entirely in keeping with “common prosperity” as it would represent redistribution of wealth.

How do we quantify what is at stake here? Let use China’s polyvinyl chloride (PVC) demand as an example as the polymer is heavily used in the construction industry to make water and sanitation pipes and window frames.

Before I give you my scenarios, here is some context: in 2000, China accounted for just 16% of global demand for PVC behind North America in first place at 26% and Europe in second place at 25%.

Last year, China accounted for 44% of global demand! In distant second place was Asia and Pacific at 14% and then Europe at 13% and North America at 12%.

But let’s instead look back to the 10% decline in demand that occurred in 2008 over 2007. As the Evergrande crisis has only recently escalated, let’s assume that this year’s demand contracts by 5% and then by another 5% in 2022 – splitting the 2008 decline over two years.

(In January-July this year, by the way, the China Customs net import data combined with our estimates of local production point towards a 1% decline in demand for the full-year 2021. This is largely the result of a huge surge in exports on strong arbitrage due to weak Chinese PVC pricing versus much stronger pricing elsewhere. A 5% decline in 2021 demand growth would thus be well within the ballpark).

See below the impact of these two different outcomes assuming that in the downside, growth in all the other countries and regions remains the same as the base case. 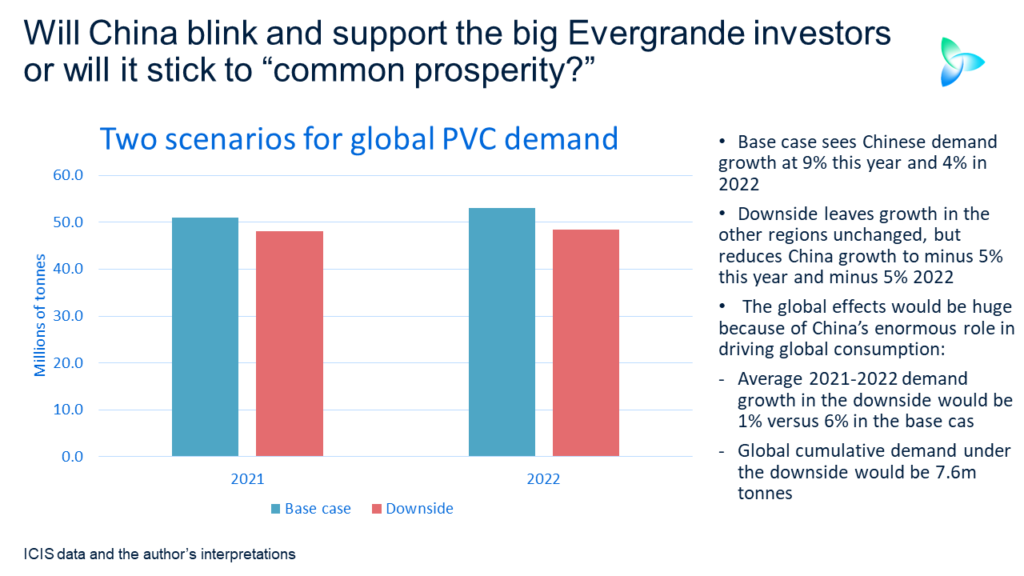 This is of course far from proper scenario work, but it does illustrate the scale of the immediate risks ahead for the global petrochemicals industry.

Demand for the other petrochemicals and polymers that go into construction, such as polyurethanes, expandable polystyrene and phenolic resins, is also obviously at risk over the next few months and into next year.

But an Evergrande debt default wouldn’t just lead to lower construction activity. It would also affect broader consumer sentiment in China – and, as I discussed on Monday, it could also lead to a global financial crisis.

And the the other key message I would like you to take away from this post is this: if you don’t have a good handle of Chinese government policy, no amount of other more standard petrochemicals supply and demand data is going to get you out of the swamp.

By John Richardson ON THE PLUS side of the H2 China polyolefins demand ledger ar...

By John Richardson PLAYING “What if?” games by changing the course of histor...