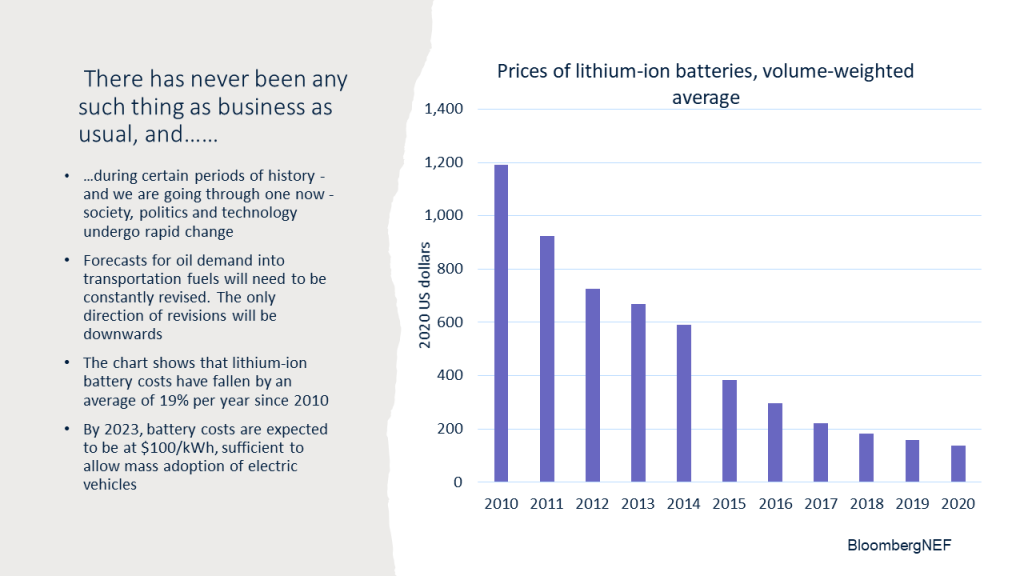 THE END of the oil age is arriving. Sooner than many people think, demand for oil in transportation will collapse. And as the environmental benefits of switching to electric vehicles become more and more apparent, we will look back and wonder “Why on earth did we use oil?”, just as we already look back and wonder why we put lead in gasoline.

Many of the blog’s readers will, I am sure, disagree and argue, backed up by their oil demand forecasts, that crude will still play a dominant role in transportation 10, 20 or 30 years from now. But the problem with too many forecasts is that they are based on standard regression analysis.

Because technological developments are so hard to forecast, a dangerous practice is to assume that the past will be very similar, if not identical, to the future. Think of the difficulty, perhaps the impossibility, of forecasting the advent of the smartphone and how mobile access to the internet has changed the global economy in myriad unexpected ways. “Hey, nobody could have seen that coming,” is an understandable response, so the temptation is to not even try.

We must also be careful of “groupthink”, of the pressure from our peers not to challenge the consensus, especially when challenging the consensus can be career-limiting if you work for a company stuck in the past.

But no matter how difficult it is, we simply must try to estimate and constantly re-estimate oil demand 10, 20 or 30 years from now. Re-estimates can only be in one direction, which is down, as technology develops. Further innovation is guaranteed because of the strong social and political consensus that human activity is driving climate change, along with of course the obvious health benefits of improving air quality.

The above chart, from Bloomberg New Energy Finance data (BloombergNEF), illustrates my point. The costs in kilowatt-hours (kWh) of electric batteries has fallen by 89% over the past 10 years, from $1,191/kWh in 2010. The rate of decline has averaged 19% per year. Even if battery costs only fall by half this rate until 2030 , they will still be just $49/kWh by 2030.

And here is the critical thing: by 2023, the latest BloombergNEF estimate is that battery costs will have fallen to $100/kWh, the tipping point at which mass adoption of electric vehicles is being forecast. In an illustration of how quickly battery technology is developing, the latest BloombergNEF forecast, from December last year, follows their previous forecast from early 2020, which estimated the tipping point being reached in 2024.

One argument against rapid transition away from oil is the number of electric vehicle options for consumers compared with the many more internal combustion engine (ICE) models. But this again assumes a static market. And even in a static market (things as they stand right now), the number of new electric vehicles available in the US is expected to more than triple in the next three years, from roughly 40 to 127.

Countering the view that $100/kWh will be the tipping point, when electric vehicles will become cheap enough to replace ICE vehicles on a mass scale, is the inevitable collapse in the value of ICE vehicles as electric vehicle sales grow. This argument doesn’t stand up because ICE vehicles are likely to be largely banned from town and city centres. Driving ICEs will also be made prohibitively expensive because of carbon taxes and/or tariffs.

Those who cast doubt on the accelerating speed of the energy transition also contend that for every lost ICE vehicle on the roads of developed countries, at least two will be added to roads in developing countries. No, because developing-country governments will increasingly recognise the health benefits of switching to electric vehicles as car ownership increases.

Further, supply of new ICE vehicles to meet emerging-market demand will be insufficient as financing for new conventional auto plants dries up. “We are on the edge of a fundamental reshaping of finance. Climate change has become a defining factor in companies’ long-term prospects,” wrote Larry Fink, CEO of Blackrock, in a letter to investors last year. Blackrock is one of the world’s biggest asset management companies. Multilateral government-run financing agencies will, I believe, follow the same approach as private finance.

We must consider the role of China in the energy transition. During the critical Fifth Plenum meeting last November, the Chinese Communist Party put greater environmental protection at the centre stage of its economic blueprint for the next 15 years.

China’s politicians have promised their people that air quality will continue to improve. So, the transition away from coal as a power source, along with the shift to electric vehicles, will continue. And as China attempts to escape its middle-income trap, pouring many more billions of preferential government loans into local electric vehicle development is a great way of adding economic value. If China walks its talk on further cleaning up its environment, it will also gain geopolitical standing.

Any set of oil demand and oil price forecasts must comprise an in-depth and constantly revised understanding of Chinese government policies, as China is the biggest auto market in the world and will also play a major role in shaping auto markets across most of the developing world. Because China wants to play a leading global role in tackling climate change, you should expect that its financial support to other Belt and Road Initiative country members will be targeted at raising electric vehicle sales.

If you are still not convinced then consider last September’s BP World Energy Outlook 2020 when under two of their scenarios, Rapid Transition Scenario and Net Zero Scenario, they saw no recovery in 2019 levels of global oil demand into liquids fuels up till 2050 – the end of their forecast period. This meant that global oil demand had peaked in 2019, BP added.

Their Business as Usual scenario (BAU) did, however, see a pick-up in oil consumption into liquid fuels until 2030 before a gradual decline after that year. “BAU assumes that government policies, technologies and social ‎preferences continue to evolve in a manner and speed seen over the recent past”, wrote BP.

But, come on, BAU has never really occurred. Government policies, technologies and social preferences have never stood still, and, during certain periods in history, change has rapidly accelerated. Because of the global consensus on climate change, and because of the role China is playing in the energy transition, we are undergoing another period of rapid acceleration.

What will this mean for the petrochemicals industry? Who will emerge as the Winners and Losers in the context of both the energy transition and the related pushback against plastic waste? This will be the subject of  my blog post next Monday.