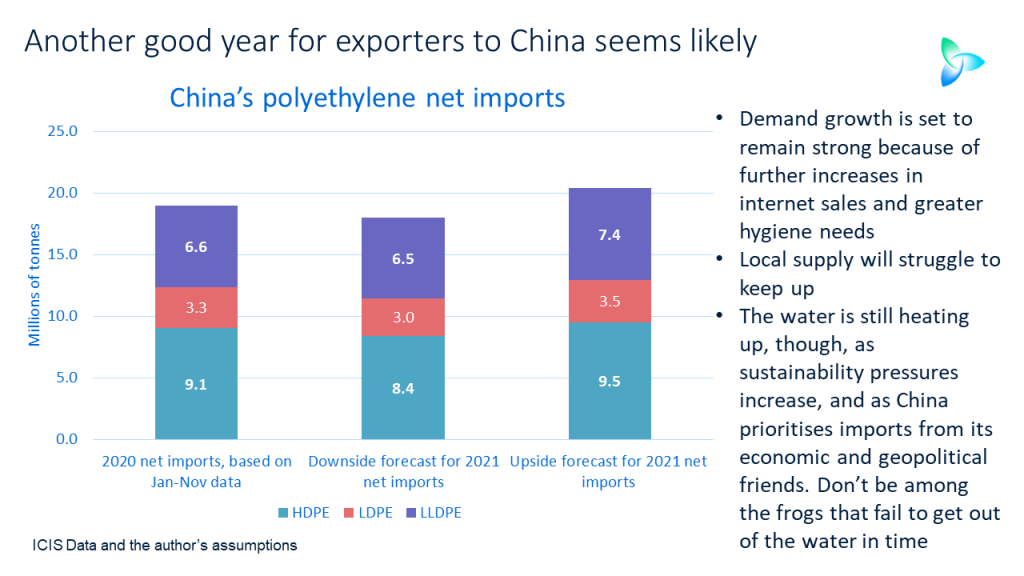 IT WAS a tremendous year. China’s 2020 polyethylene (PE) demand growth over 2019 averaged 10% across the three grades. This comprised a 13% increase in demand for high-density PE (HDPE), a 2% decline in demand for low-density PE (LDPE) and a 13% rise in linear-low density PE (LLDPE) demand, according to my preliminary reading of the data and discussions with the market.

Wow. As I’ve been highlighting since May last year, Chinese demand and global demand have been buoyed by a further surge in online sales as a result of the pandemic and increased hygiene needs.

Another factor behind last year’s stellar growth in China was packaging for exports. Chinese exporters gained much bigger shares in global markets thanks to the availability of competitively priced raw materials, export tax incentives (part of a government plan) and Chinese factories running while factories overseas shut down because of the pandemic. China made gains in exports of consumer electronics, white goods and personal protective equipment as it catered for our new pandemic lifestyles.

Up until November, Chinese exports had increased six months in a row. China’s trade surplus soared to a record $75.4bn in November on a year-on-year basis, as total exports increased by 21.1% to $268bn. Exports of high-tech products also leapt 21.1% to $86.1bn. Exports of medical devices rose 38.4% to $1.6bn. While Donald Trump’s trade war aimed at rebalancing manufacturing back to the US, Chinese total exports to the US jumped by 46% to $52bn. The US was China’s top export destination.

The surge in Chinese internet sales looks set to continue as buying online is so embedded in Chinese lifestyles, whereas demand for hygiene products might eventually fade as vaccines are rolled out. But this decline will probably not happen before 2022 because of the precautionary principle.

An immediate threat to this, though, is a possible decline in Chinese exports because of the renewed surge in coronavirus cases overseas. The new, more infectious variants of the virus seem to have set the economic recovery back by a few months. Failure by the US to come anywhere close to its end-year vaccinations target also illustrates that the global rollout of vaccines may be stalled by distribution challenges.

A further threat to Chinese exports is the extraordinary rise in container freight costs. The cost of shipping a 40-foot container from China to Charleston, South Carolina, the US, was around $7,500 in December, up from $2,700 in April, said The Wall Street Journal. The cost of shipping a tonne of polymers to China had risen to $115/tonne in December from $55/tonne in August.

The surge in freight costs is the result of the mismatch between the flood of exports leaving China, the much lower demand for imports by China, pandemic-related restrictions in activity at ports outside China and consolidation in the container industry.

How long will this last? ICIS Pricing editors have been told that shortages will ease after the end of the Lunar New Year in late February, but one PE market participant tells me they are expected to last 1-2 years.

But exports are not so critical for China’s PE demand as only some 10-15% of PE is shipped to China for re-export in finished goods. For polypropylene (PP) and styrene monomer (SM), though, as I shall discuss in later posts, some 20-30% of imports are re-exported as finished goods (PP and SM are largely used to make the finished goods themselves rather than primarily used to package finished goods, as is the case with PE).

Because PE is a “local-for-local” market in China, and because of continued strong growth in internet sales and increased hygiene needs, I see another strong year for demand in 2021.

PE demand growth might moderate, though, as the market matures, because of the decline in exports – and because of some of the heat being taken off domestic recovery. Beijing appears to have become a little less pro-stimulus due to concerns over rising debts.

“Debt growth and high interest rates are a risky combination, adding to China’s overall debt pressure. The situation of fiscal expenditure not being matched by fiscal revenue has become worse, and the proactive fiscal policy is looking tired,” wrote the government-run Chinese Academy of Social Sciences in its 2021 China Economy Forecast.

Helen Qiao, head of Asia economic research at Bank of America Merrill Lynch, said China would lower its fiscal deficit target to 3.3% from 3.6% in 2020 to keep its leverage under control. A recent series of defaults by state-run firms have raised concerns over their finances. There is also anxiety over the extent of local government debt held in local government financing vehicles.

There is always a chance, of course, of something much worse than mild deleveraging. A full-blown debt crisis cannot be ruled out because, as Michael Pettis, professor of finance at Peking University, wrote in the Financial Times in December: “Between 1980 and 2010, Chinese GDP doubled four times, but debt levels were low and rose slowly. However, between 2010 and 2020 when GDP doubled again, China did so by tripling its total debt burden to $43tn, so that it now stands, officially, at over 280% of GDP.”

But, hey, China has time and again confounded the sceptics on every aspect of its economic management, including most recently its ability to quickly pull out of last year’s pandemic crisis. So, I see a debt crisis in 2021 as a tail risk.

Another negative factor for virgin PE demand is the bans and restrictions on single-use plastics that China announced last January. But these will take some time to be fully implemented as the strong growth in packaging for internet sales continues to pull in the opposite direction.

No matter how many cracker-to-PE complexes China builds, it doesn’t look as if it will move much closer to PE self-sufficiency in 2021. This is despite a projected 21% rise in HDPE capacity over last year and a 13% increase in LLDPE capacity. LDPE capacity growth is forecast to rise by 5%.

But in PP, SM and PX markets, which I shall again re-examine in later posts, complete self-sufficiency is already in reach.

China not much closer to PE self-sufficiency in 2021

Back to PE and the above chart which shows my estimate for PE net imports in 2021, involving downside and upside scenarios versus estimates for total 2020 net imports. The estimates for 2020 are based on annualising the actual data for January-November (the December data will be released later this month).

Now let me give you all the details behind how I reached my two scenarios for 2021. Let us start with the downsides:

The upsides are as follows:

Add this together and the downsides would see net imports across all three grades 979,000 tonnes lower than in 2020; the upsides would result in net imports 1.4 tonnes higher.

But even my worst-case outcome must be put into this context: this year’s total net imports would still be at 18m tonnes versus 16.8m tonnes in 2019.

I must again stress, though, that the water is warming up and the metaphorical frog is at risk of boiling to death. Exporters must be aware of rising sustainability pressures. I believe that China will build a state-of-the-art recycling industry, combined with effective implementation of bans and restrictions on single-use plastics, for economic value-addition, environmental and supply security reasons.

Also be aware that while China’s demand for virgin PE could well remain very strong over the next decade, as recycled material gradually takes an ever-bigger share of the market, China will be selective from whom it buys. I believe it will only buy from its economic and geopolitical friends as the drift towards a bipolar world continues.

But these are issues for the C-suites. At the operational level “hands-on” level, sales executives at the major PE exporters to China look set for another good year.