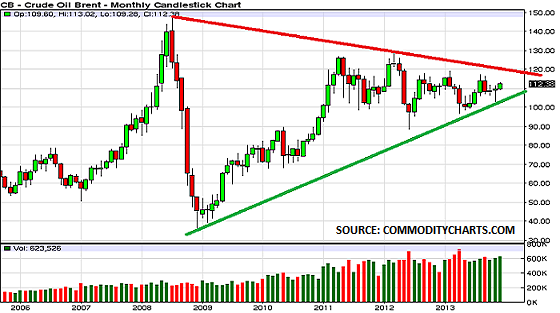 The blog has a suggestion for a quiz question for anyone planning party games over the Christmas period:

Q.  What was the longest distance travelled by a cargo of crude oil in 2013?

Isn’t that amazing?  We are constantly being told that supply is short, and that today’s high prices are justified by really tight market conditions.  And yet cargoes of North Sea crude have twice been sent half way round the world to China in recent weeks, as well as to S Korea and Chile.  Without favourable tariff/arbitrage positions to support these movements, one wonders where the oil would have gone?

Now some clever person at your party might point out that PetroChina own half of the Grangemouth refinery in Scotland, and so they might have special reasons for ‘testing the route’.  In which case, as host, you could nod your head and ask a second question, showing them the chart above:

Q.  When was the last time that oil markets traced out a triangle shape of this size over a 5 year period?

Unfortunately, the blog doesn’t have a definite answer, as historical pricing wasn’t recorded on a daily basis.  But it suspects the answer is never.  Certainly it has never seen this before.

The importance of the triangle shape is that it tells us there is a continuing battle underway between the bulls betting on higher prices, and the bears wanting lower prices.  Normally, these type of battles get resolved within days or weeks, as physical supply/demand balances cause either a shortage or a surplus to appear.  Only rarely do they continue even for months.

The peak of this triangle, however, stretches back to the $150/bbl level seen in July 2008.  Whilst its base is the $30/bbl seen in December 2008.  Even more remarkable is the fact that prices have been at record annual levels between $100-$120/bbl  for the past 3 years.  This would have been unbelievable at any other time in history, given the lack of any physical supply shortage.

In summary, we therefore have a combination of:

Of course in the short-term, the normal seasonal boost to demand in Q1 may help restore supply/demand to a more reasonable balance.  But it remains hard to understand why European oil from the N Sea is moving to China, S Korea and Chile due to lack of demand, and yet prices stay at record highs.  This does not seem either logical or sustainable in the longer-term.

There is a silver lining to this cloud, however.  Volatility being low means that option prices in financial markets are close to record lows as well.  So if you or your company want to hedge the current market, its never been cheaper to take a position, either up or down.

Think of it like an insurance policy.  If the house doesn’t burn down, then you’ve paid the premium but got nothing in return.  But on the other hand, if the house does burn down, you’ll be very glad you’re not standing out in the street, with only your night attire for protection.

If prices do go out of the current range, up or down, then the technical traders who dominate the market will all rush to the ‘winning side’.  Whilst the banks will immediately cut back their lending, and exchanges will make margin calls, in order to protect themselves.  So it is unlikely to be a smooth movement of a few dollars either way.

It could be scary, if it happens.  Or, as PIMCO the $2tn bond fund warn about the overall investment outlook for financial markets:  “Don’t fight central banks, but be afraid.”

Thursday night update.  Shell have today announced the cancellation of their $20bn Gas-to-Liquids project in the USA.  They cited “uncertainties on long-term oil and gas prices and differentials” as a key reason.  It seems highly significant that one of the world’s largest  oil companies should express the same uncertainties as the blog.