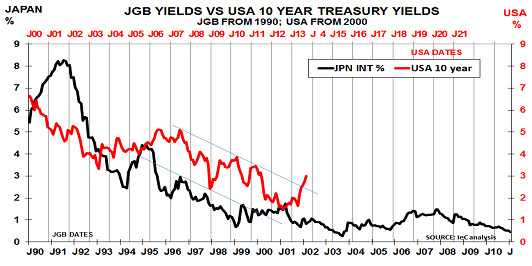 The above chart will be familiar to readers of Boom, Gloom and the New Normal.   It shows the way in which Japan’s interest rates (black line, bottom axis) have been a leading indicator for US interest rates (red line, top axis) since the stock market peaks of 1990 in Japan and 2000 in the USA.  Chapter 2 highlighted the close parallels between the performance of the two countries’ financial markets, with Japan leading by 10 years.

The reason for the parallel is simple, namely that Japan’s BabyBoom took place earlier than in the West.  Its transition from SuperCycle to New Normal thus began 10 years earlier.

Of course, Western policymakers have consistently argued they will be able to avoid Japan’s slide into deflation and negative growth.  Ben Bernanke, US Federal Reserve chairman, even made a speech in 2002 titled “Deflation: Making Sure “It” Doesn’t Happen Here”.  Words, of course, are cheap, but since 2008 the Fed has also increased its balance sheet via the Quantitative Easing (QE) programme from $0.9tn to $3.5tn, around 25% of US GDP.

The chart highlights the various stages of the Fed’s strategy since Bernanke’s 2002 speech:

By April, however, the red line was falling again and was back at 1.6%.  This seems to have been the bottom of the cycle, for now at least.

Since then, it has moved into a new phase.  The key has been Bernanke’s desire to start the exit from the QE programmes before he leaves office in January.  His May announcement the Fed would start to ‘taper’ its purchases may well lead to a more firm commitment today, after the Fed’s meeting.

In turn, this is likely to create new problems for the markets and the economy.  As a number of leading fund managers have noted, the effect of the tapering will be to allow the market to once again focus on economic policy.  Thus Jack Gundlach has warned, “ending QE would allow the fiscal problems to re-emerge.”

Financial players hate uncertainty, and the prospect of a new policy has led to near-panic in some parts of the markets.  Rates have thus nearly doubled to 3% in just 4 months.  In turn, this will soon test the underlying strength of the recovery in the critical housing market – where mortgage rates are already back at June 2011 levels.

Already, the Mortgage Bankers Association expect overall lending to drop 32% next year as refinancing demand drops 60%, back to levels last seen in 2000.  They warned last week:

“What we’re going through today is not a temporary, short-term anomaly. This is a substantive change in the cycle of our industry.”

The low leasing costs that have driven higher auto sales are clearly also now under threat.

In the end, demographics drive demand.  Household spending is, after all, 70% of US GDP.  And an ageing population, entering its low spending years, will inevitably lead to low growth and deflation.  So all the Fed’s efforts have been equivalent to pushing on a string.

The wild market gyrations of the past decade could have been avoided if the Fed had been prepared to acknowledge this simple truth.  And worse may now follow.  The key current risk is that Congress fails to promptly increase the debt ceiling.  As the New York Times warned yesterday:

“With a government shutdown looming at month’s end and a crippling default on the nation’s debt possible by mid-October, Congressional leaders may have run out the string on legislative trickery. Conservative Republicans in the House have declared they will not go along with any more gimmickry from their leadership. Democrats have vowed they will not help Republican leaders out of their jam without some easing of spending cuts. And a way forward — to keep the government operating and solvent, and to protect the international economy from a default-driven shock wave — is nowhere to be found as the House is set to vote this week on a stopgap spending plan.”

The blog fears that the new Fed Chairman may have many more crises to tackle, as the great unwinding from this policy disaster continues.

Chloralkali output suggests EU and US recoveries still to appear

Chlorine and caustic soda markets rarely lie about the underlying state of deman...

Cotton will be one of the main case studies used by future historians to highli...