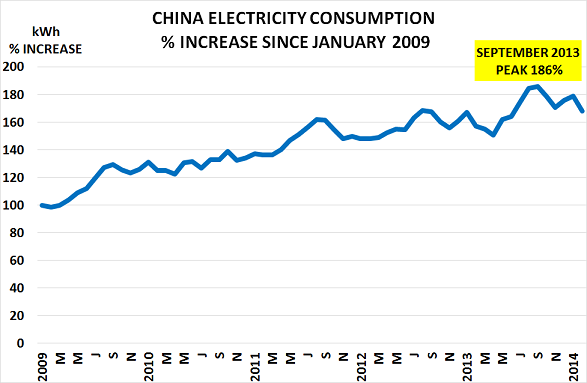 There’s a lot of wishful thinking underway about China’s future growth.  All the experts who told us that its growth was ‘inevitable’ and would never end, are now having to face the issue that clearly growth is now slowing fast.

Their response, of course, is to remain in Denial mode.  They imagine that a magic wand will soon be waved to restore growth by yet another $trillion stimulus package.  They simply cannot envisage a world in which China effectively went bankrupt.

But, of course, countries can and do go bankrupt if they can’t pay their debts.  It just takes rather longer for them to run out of options.  But as the blog described in last month’s Research Note, China is now very close to the end of the road with its $10tn+ lending bubble.

China’s new leadership appear to have recognised this reality.  Certainly their new policies are the opposite of stimulus.  And they give no sign of being about to reverse course at the first sign of trouble.  Those hoping for a H2 recovery may therefore end up being very disappointed.

Though few have yet recognised it, China’s Bear Stearns moment took place last week with the $400m default of Zhejiang Xingrun Real Estate Co.  Just as forecast in the Research Note, there was no panic in official circles.  Instead Premier Li Keqiang confirmed more defaults would follow.

The problem for the experts is that they have grown used to following GDP estimates.  But these are fundamentally flawed as an indicator.  As the blog noted in December 2010, then vice-premier Li ‘told the US ambassador that the GDP figure, for example, is “man-made and therefore unreliable“’.

“The slowdown was mainly attributed to sluggish industrial power use, which accounted for around 70% of the country’s total consumption, especially high energy-consuming industries like iron and steel, cement and petrochemicals”.

Lower consumption growth, and perhaps even lower absolute consumption, is almost inevitable.  The reason is that 79% of its electricity production comes from coal-fired power stations – almost double the global average.  And coal is one of the major causes of China’s current pollution crisis.

So it seems likely that part of the new strategy will be to take advantage of slowing growth to close some of the worst-polluting stations, along with iron, steel and other factories that contribute to the problem.  Zero GDP growth for a period between now and 2018 should thus be a Base Case for anyone doing business in China.

Of course, the experts will still argue that another stimulus will come along and ‘kick the can along the road’ to enable further growth.  But this argument fails to recognise that at some point, a road can run out.  Far better to stop today, than disappear over the edge in a year or two’s time.

Benchmark product price movements since January 2013 are below, with ICIS pricing comments:
PTA China, down 27%. “The average operating rates of PTA plants in China stood at 65-68% for March, and are expected to decline to 57% for April”
Benzene, Europe, down 6%. “A raft of benzene and pygas exports out of the region in February was keeping availability balanced overall”
Brent crude oil, down 5%
Naphtha Europe, down 2%. “The naphtha arbitrage window to Asia has opened after weeks, giving European traders an opportunity to once again book cargoes to the region”
US$: yen, up 16%
HDPE US export, up 22%.  “Producers maintaining price positions, but with prices unworkable in the global market,”
S&P 500 stock market index, up 27%

It seems that cotton prices are about to return to normal levels again.  The b...

A major debate is underway in Eurozone financial markets about the imminent appr...