US styrene another petchems sector at risk from trade war 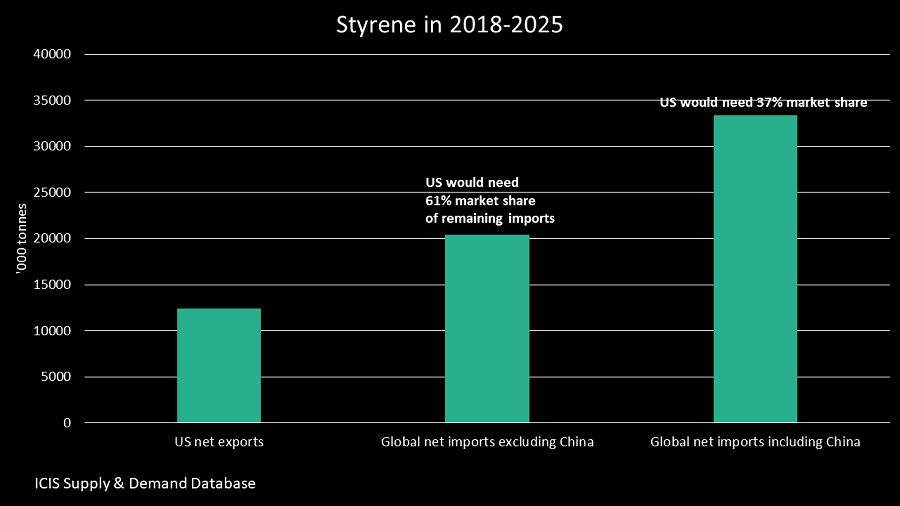 THE US decision to pick a fight with China over trade and geopolitical influence could backfire very badly from the perspective of new US investments in petrochemicals capacity – most notably polyethylene (PE) and ethylene glycols (EG).

The data tell is that many billions of dollars of investments in new plants will struggle to achieve anything like the expected returns if the US ends up being excluded from the key China market over the long term. China will account for 84% of global net EG imports (imports minus exports) and 52% of global net PE imports in 2018-2025.

What the data also tell us is that whereas the US has to be able at least maintain it not grow exports to China in order to make sense of its new investments, it would be very easy for China to source any shortfalls from other countries.

The reason for China’s upper hand is that only a small percentage of its PE and EG imports come from the US. The same applies to all other petrochemicals and polymers.

China could as a result afford to implement an outright ban on US petrochemicals imports as a weapon in the trade war, going well beyond its current 25% duties on US imports.

This trade war has the potential drag on and on, and could even become a new Cold War.

Another US petrochemicals sector in the firing line of the trade war is styrene. Here, though, there are no plans for new investments.

This reflects what we expect will be negative US demand growth in downstream polystyrene (PS), with expandable PS and acrylonitrile butadiene (ABS) consumption only rising in the very low single digits.

The US styrene industry is struggling with the global problem of very weak growth in PS, the main consumer of styrene. We expect world PS demand to only edge up by an average of 0.7% in 2018-2025.

PS has for many years been losing market share to other polymers such polypropylene and polycarbonate.

US styrene players have responded through a big growth in exports. Back in 2000, total exports accounted for 23% of US production. This had grown to 44% in 2017.

And surprise, surprise an important destination for the US is China because its import demand dwarfs that of any other region or country. Just 1% of total US exports went to China in 2008. But by last year this had risen to 14%.

Styrene is one of a range of US petrochemicals and polymers that have been the subject of 25% Chinese tariffs since 23 August. This probably explains why China only accounted for 8% of total US styrene exports in H1 this year.

So, what might happen if the US were not able to export any styrene to China in 2018-2025? Take a look at the chart at the beginning of this blog post.

What you can see is that between those years, China will account for 12.9m tonnes of net styrene imports (imports minus exports) out of total global net imports amongst the net deficit countries and regions of 33.4m tonnes – a 52% share.

This actually represents a slight rebalancing of the market away from China. In the previous eight years – 2009 until 2017 – China accounted for 74% of global net styrene imports.

The shift away from China is the result of growth of net styrene imports in the Asia and Pacific region which includes India, the rest of south Asia and Southeast Asia.

This would mean it need a 37% rise of global net imports if it can ship to China. If it cannot, the US would require a 61% share of the remaining import markets.

If US styrene production was maintained at the level that we expect, the US would face stiff competition from the other major exporters – the Middle East and Northeast Asia ex-China.

This could be different situation from PE and EG where new plants would have to run hard regardless of the loss of the China market because of the need to pay-down debt.

Styrene producers, unencumbered by new investments, may choose to lower operating rates if they lose access to China.

This, though, would raise complications upstream in the resulting surplus ethylene and benzene – the feedstocks for styrene.

One of President Trump’s objectives in the trade war is to bring manufacturing back to the US.

Cheap plastic packaging, cutlery, washing machines and other electronic goods that are now made in China from PS and ABS instead made in the US?

This seems unlikely because US labour costs are the issue. If China cannot make these things cost effectively for export to the US because of tariffs, then manufacturing is more likely to move to other lower labour cost regions and countries such as Asia and Pacific and Mexico.

This raises the possibility that growth in styrene demand in Asia and Pacific would help US styrene players compensate for the loss of China.

But then comes the problem that most of the Asia and Pacific region may end us aligning with China if the world splits into two trading blocs.

Developing countries in Asia and Pacific stand to benefit enormously from Chinese infrastructure investment via its Belt and Road Initiative (BRI).

If the US continues to withdraw from overseas spending on the developing world, this would make a tilt towards China by these developing countries very hard to resist. Many of them have major infrastructure needs.

The BRI has been heavily criticised for some of its lending practices. But in the absence of other options, what choice will the developing world have?

Mexico, though, might be another story. In 2017 it accounted for 38% of total US styrene exports – the US industry’s biggest export destination.

Perhaps Mexico, which is obviously in the North American Free Trade Agreement (NAFTA), will supply all the cheap plastic cutlery and washing machines that China will no longer make for export to the US. Mexico has low labour costs.

This presuppose, though, that Mexico is able to produce the type of plastic products that China manufacturers.

Sure, eight yours is good deal of time for manufacturing chains to shift.

And I am sure you have guessed the sting in the tail here. This also assumes that the US won’t fall out with Mexico over trade. In today’s political climate, the US falling out with Mexico, and even the collapse of the NAFTA deal, has to be a possibility.