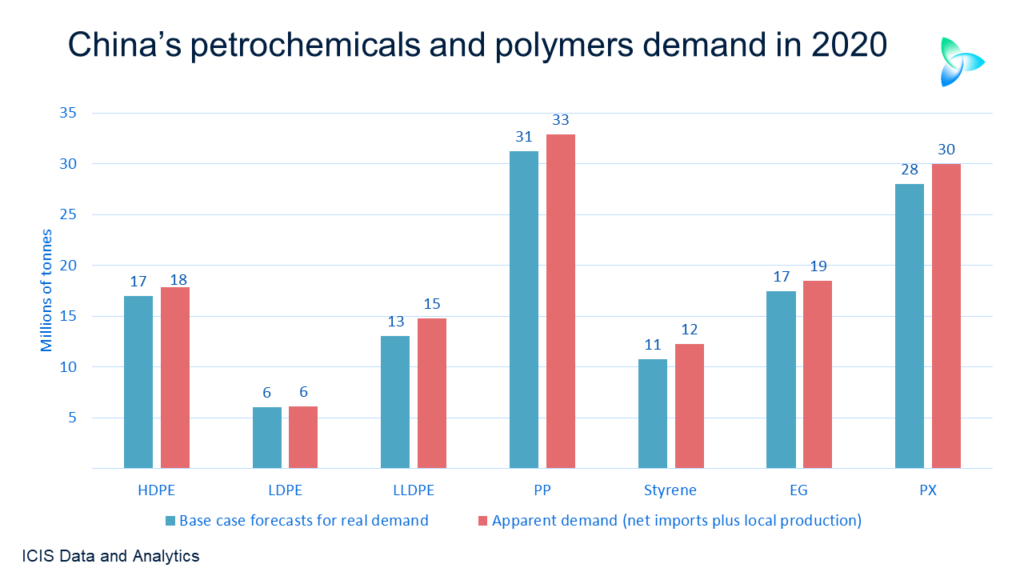 THE GOOD NEWS is that the total US dollar value of China’s total exports increased by 33% in January-February 2020 to $483bn over the same first two months in 2019, according to a few further morsels of trade data that emerged yesterday.

A comparison with 2019 is much more relevant than drawing a comparison with last year as, of course, China was in the midst of the pandemic during January-February 2020 when a large proportion of its manufacturing capacity was shut down. This makes the widely reported 60.6% year-on-year increase in exports in January-February 2021 highly misleading.

What I still don’t have, though, are month-on-month comparisons of export growth in January-February 2021 versus Q4 last year. We need to understand whether last year’s strong export growth has been fully carried over into 2021.

Another data hole remains easily separating out what happened in January versus February 2021 because of China’s decision, taken last year, to release export and import data for both these months at the same time.

It does seem as if there was a slowdown in exports in revenue terms in February 2021 versus January this year. One might of course expect this because of the 11-17 January Lunar New Year (LNY) holidays that could have slowed customs clearance.

But because of travel restrictions imposed to control the spread of China’s second wave of the pandemic, did China’s ports slow-down in February or did port workers remain at their stations? If ports operated as normal and all was good with China’s export trade, there should have been no slowdown in February 2021 exports versus January this year.

We do know that many of China’s factories stayed open during the holidays, again to restrict travel, so there was no shortage of manufactured goods to keep the ports operating.

You should also recall that last week saw the release of the official and Caixin/Markit Purchasing Managers’ Indices (PMIs) for February. They were weaker than in January and reported declines in new export orders.

If the ports slowed down as per normal during the LNY holidays, then perhaps weaker February export orders might be nothing to worry about.

But also consider the comments from Dr Daniel Lacalle, an economist and fund manager. He wrote that the official PMI was weaker than economists had expected. The economists had factored in an LNY slowdown in their forecasts for the PMI.

“Something is wrong when an export-led economy shows a massive slump in orders in the middle of a global recovery. The new export orders index fell into contraction territory for the first time since September 2020,” wrote Dr Lacalle.

“Two factors have affected the export orders’ weakness. The relative strength of the yuan, which has reduced orders for the lower added-value products, and the rise in the input and output price PMIs, which shows that inflationary pressures remained elevated. We could also conclude that the European economy double-dip recession risk has affected orders,” he added.

And I know I keep worrying away at these issues, but we still have no clarity whatsoever on the impact on China of the global container freight and semiconductor shortages. On the former issue, two important new articles have appeared in the media over the last week, the first in the Financial Times and the second in the New York Times.

The FT article quoted one exporter in Shaoxing, a city on the east coast of China, as saying that the rise in freight rates has caused many textiles businesses to shut down, with the NYT giving a global picture of the disruptions in the container freight industry.

Containers that had moved face masks and other personal protective equipment from China to Africa were sitting in African ports because there were no return cargoes, reported the NYT.  Labour shortages at ports caused by the pandemic had disrupted container movements, the newspaper added.

The NYT said that some experts believed container freight disruptions would last for the whole of 2021. Originally, it had been hoped that the problems would be sorted by the end of February; next, the estimate was for the northern hemisphere summer, and now not until the end of this year.

“I don’t know if containers are a big issue for Chinese exports and imports, but do not underestimate the resourcefulness of China,” said a polymers trader last week. He added that China had stepped up construction of new containers since freight rates went through the roof last August.

Evidence of China’s resourcefulness is perhaps a report in the Global Times that Chinese container-freight company COSCO shipped 400 empty containers to the US try and ease backlogs at US ports.

The semiconductor shortage looks as if it will last until at least the second half of this year. The shortage is not just the result of further imbalances caused by the pandemic; it is also a symptom of global dependence on just three major high-value chip manufacturers.

So far it appears as if only auto and game console production have been affected by the chip shortage. More broadly across all electronics, the effect appears to be a delay in the launch of new models rather than outright shortages.

We again have no clue about whether cutbacks in auto and game console production have affected Chinese exports. It is equally unclear whether a reduction in consumer choices in other electronics sectors might have had a dampening influence on China’s export trade in 2021 relative to Q4 2020.

The strength of the domestic economy another grey area

We are just as much in the dark about the strength of the domestic economy. Was LNY holiday spending stronger or weaker than during the 2019 holidays? Again, only a comparison with 2019 is relevant as LNY holiday spending collapsed during 2020 because of the pandemic. The Wall Street Journal reported that spending was higher than in 2919 whereas the South China Morning Post reported it was lower. This highlights the difficulties of interpreting official data.

Here is another problem that has been broadly recognised by most economists. China’s spectacular export growth in personal protective equipment, hi-tech electronics and white goods etc may not be sustained if lockdowns continue to ease. Demand for the goods we have wanted or needed during lockdowns could decline as we return to something like our old lifestyles.

But to what extent will continued high levels of fiscal and monetary stimulus sustain a boom in Chinese exports? We could see a huge increase in conspicuous consumption in developed economies, or rather spending for the sake of spending.

A further complication is that while it could be the case that LNY spending in 2021 was indeed lower than in 2019, this doesn’t tell us anything about the rest of the year. Because this year is the 100th anniversary of the founding of the Chinese Communist Party, and is thus a politically sensitive year, will we see big new government stimulus if domestic growth is weak?

How, though, would big government stimulus be matched against professed concerns from Beijing about the increase in debt levels since the pandemic began?

The implications for petrochemicals demand

Last year was largely all about the “China in, China out” story – strong Chinese petrochemicals import growth to feed re-exports of finished goods.

This led to, for instance, a 26% 2020 year-on-year rise in polypropylene imports, a 12% rise in polyethylene imports and a 6% rise in ethylene glycols imports. Declines in imports of styrene monomer and paraxylene were less than expected given the big increases in local capacity.

As the summary slide at the beginning of this blog post reminds you, the 2020 increases in China’s petrochemicals and polymers apparent demand (net imports plus local production) were much higher than our forecasts for real demand.

So, my repeated questions about the real nature of the strength of China’s exports really, really matter. Equally important are my questions on the genuine strength of the local economy. If the spectacularly strong rates of demand we saw in 2020 are not repeated in 2021, the implications for the global petrochemicals industry will be significant as China is by far the biggest driver of global demand.

The underlying problem here is that China remains pretty much a statistical black hole.

Everything may turn out alright in the end as was the case last year when we were all caught by surprise at the strength of China’s export-led recovery. There may again be nothing to worry about. But crossing your fingers and hoping for the best is hardly sound business planning.

PREVIOUS POST China's "two sessions" in 2021 could easily set the direction of global petchems for decades to come
NEXT POST Seeing beyond tight supply: three new scenarios for global HDPE demand in 2021-2025