Home Blogs Asian Chemical Connections China’s petchems market rally: we don’t have enough data to decide whether it is sustainable 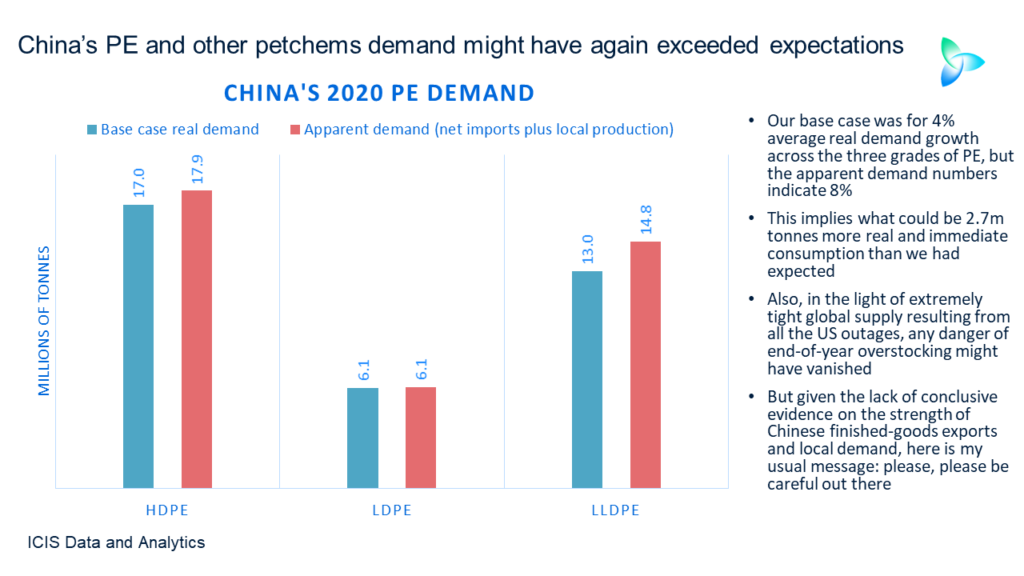 But because some of China’s factories either did not shut down at all this year or staggered their closures to control the country’s limited second wave of the pandemic, this week’s price rally might have not been as strong if it had not been for events outside China.

Think about it – there would have been fewer factories than usual returning to work demanding petrochemicals and polymer raw materials, as fewer closures had taken place than usual during the LNY holidays.

But, of course, it is the events outside China that have given the price rally a lot of juice.

Oil prices have been on a tear for most of this year on confidence that the worst of the global pandemic is behind us.

Oil prices dipped a little on 24 February, but for most of the days since the end of the 11-17 February LNY holidays, the mood in crude has been bullish. Bank of America say oil prices could reach $70/bbl by the northern hemisphere summer.

For petrochemicals though, the monumental event is the extreme cold weather in the US that triggered power outages, leading to many shutdowns of petrochemical plants.

The ICIS Houston office continues to do a fantastic job in covering this event as this latest summary article from my ICIS colleague Tom Brown illustrates.

As I wrote this post, 60% of US ethylene capacity had been disrupted by the outages. An average 40% of polyethylene (PE) capacity across the three grades had been affected, with high-density PE seeing the strongest impact at 54%.

It could have been a lot worse. The whole of the Texas power grid was last week just minutes away from total collapse, according to the New York Times. If that had happened it could have taken months to fully restore power to Texas, the newspaper added.

How quickly US petrochemicals supply will come back online remains anyone’s guess. As Al Greenwood, another ICIS colleague, wrote in this article:

Chemical plants on the US Gulf Coast could begin to restart within days or weeks, depending on whether they have access to feedstock and utilities and whether they avoided an unexpected cold shutdown, which cokes furnaces and chunks reactors.

Much will depend on whether companies were able to shut down their operations in a controlled and precautionary way, said Brian Pruett, senior vice president of PE and PP with CDI, now part of ICIS.

Even then, because such deep freezes are so unusual on the US Gulf Coast, companies may have overlooked some steps, Pruett said. That could complicate restart operations.

Petrochemical markets are global in nature with some significant regional variations.

“Swing producers” are diverting cargoes from China in search of much better netbacks in Europe, Latin America and the US – the three regions most directly affected by the US outages. Swing producers include those in the Middle East and South Korea.

Adding further momentum to upward price movements in China are the petrochemical and polymer futures exchanges such as the Dalian Commodity Exchange, which over the last ten years have become important short-term drivers of physical markets. The exchanges have rallied this week.

BUT what of real Chinese demand? Sure, apparent demand is stronger as buyers are stocking up on petrochemicals to hedge against further price increases. This always happens at times like this. But apparent demand is not the same as sustainable, real demand.

What is sustainable, real demand in China? We simply don’t know because of holes in the available macroeconomic government data, questions over the reliability of Chinese official data in general and different interpretations of what the numbers that we can get hold of are telling us.

I maintain that because of issues with the macroeconomic data, you need to prepare for a downside outcome.

Such an outcome would be a moderate slowdown in the Chinese economy in Q1 versus the fourth quarter of last year. This comparison is crucial because Q1 this year is going to look much better than the pandemic-affected first quarter of 2020.

If there is a moderate slowdown, the risk is that the stocking up we are seeing in petrochemicals markets is followed by destocking if evidence becomes available that real demand is not as strong as some people had thought.

We don’t have the export data for January

If you recall, the spectacularly strong post-pandemic economic recovery that China enjoyed in 2020 was largely down to a surge in exports of manufactured goods. The excellent Trade Data Monitor service monitored the recovery from May onwards with their recaps of the monthly release of the Chinese export data.

Their summary of Chinese exports for the whole of 2020 found that as Western consumers shifted to working from home, China’s exports of high-tech goods increased by 6.3% to $776.7bn on a year-on-year basis.

The country’s exports of medical devices, such as ventilators, face masks and many of the key ingredients for mass-producing vaccines, rose by 40.5% to $18.1bn, added Trade Data Monitor.

In total, China’s exports rose by 3.6% to a record $2.6tr in 2020 over 2019. China demonstrated its ability to compensate for declines in certain exports including clothing and footwear through increases in the goods we needed for our pandemic lifestyles.

China’s widespread global manufacturing dominance across so many value chains placed it in a very strong position. In comparison, during the first 11 months of last year, US exports declined by 13.9% to $1.3tr.

China’s strong export performance was very important for global petrochemicals growth as, despite big increases in local capacity, China was unable to keep up with demand. It was a “China in and China out” story: surging petrochemical imports were re-exported as finished goods.

All these increases took place after a strong year of import growth in 2019. In other products where imports declined, such as styrene monomer (SM), the declines were not as great as had been expected given the big volumes of new local capacity that came on-stream.

But we don’t as yet have any export or import data for January. Last year, China took the decision to release January and February export and import data as one set of numbers.

This is very problematic because of both the delay and because like-for-like year-on-year comparisons become very difficult because of the different timings of the LNY holidays.

The delay, though, is the bigger issue, because we won’t know until March, when the January and February data are released, whether China’s exports have been negatively affected by the global container freight and semiconductor shortages.

Global container freight rate increases seem to have levelled off over the last two weeks. However, the shortage of containers may not be resolved until the northern hemisphere summer, say some experts.

The power outages in the US have made the semiconductor shortage, which began in Q4, even worse as some US production is offline.

If China cannot find enough containers to export its manufactured goods, its export growth might have slowed down in January 2021 versus December last year when exports were booming.

Insufficient supply of semiconductors, which has so far only affected the autos sector, might have affected auto components exports – and thus the polymers that are used to make auto components.

Some experts think the chip shortage will be resolved by Q3, whilst while others think it could last all year. Samsung has warned the shortage could start to affect smartphone production.

In the absence of the January export data – and the data for January petrochemical imports – along with context of the container and semiconductor issues, we must also consider the following:

Global shortages resulting from the US outages might have prevented any of the above leading to end-of-year overstocking because, as I said, petrochemical cargoes that would have gone to China have surely been diverted elsewhere. We don’t have the data to confirm this year, but this seems a fair assumption.

In the absence of data on Chinese exports in January, it is difficult to move towards a conclusion on whether real Chinese petrochemical demand is now stronger, the same as or weaker than in Q4 2020.

The other piece of the jigsaw is the strength of local petrochemicals demand. Forming a judgement here is equally difficult because of issues with the official government macroeconomic data and different ways of interpreting the numbers.

China’s retail sales fell by 3.9% last year versus 2019, according to the official numbers. However, the China Beige Book, the independent China economic analytics company, estimates that retail sales in fact fell by 4.8%.

Whichever number is correct, the conclusion is the same: during 2020, China’s domestic economy was smaller than before the pandemic. This underlines my point about the importance of last year’s export boom in China’s recovery.

When the limited second wave of the pandemic arrived in China in January, the betting was that travel restrictions would lead to disappointing LNY consumption as so many people would be forced to stay at home or work.

It was thought that this would result in lower petrochemicals demand linked to travel and buying gifts for relatives. This was a widespread view.

But handouts that were introduced to compensate for the pandemic were kept in place during this year’s LNY, said the Wall Street Journal.

The newspaper wrote that consumption at major retailers and restaurants reached yuan (CNY) 821bn ($127bn) during the holidays, 29% higher than last year and, crucially, 4.9% higher than in 2019. The LNY holidays in 2019 were before the pandemic-devastated spending during last year’s holidays.

Box office, jewellery and fashion sales also soared year-on-year during the LNY and compared with 2019, according to data from China’s Ministry of Commerce. Finally, after a long struggle, it might be that China’s domestic economy is on the road to full recovery.

What if, however, the LNY retail sales figures are just an initial estimate by the Ministry of Commerce from early returns from the retailers?

The South China Morning Post has a different take to the Wall Street Journal on the LNY official retail sales numbers. It agreed with the Wall Street Journal that the official numbers indicated this year’s LNY spending hit $127bn and that this was 29% higher than last year. However, its calculations suggested that the LNY 2021 consumption was still  lower than in 2019 – when it reached yuan (CNY) 1tr or $168bn.

Please, please be careful out there

Whereas every detail of the US economy can be analysed and re-analysed from many different angles by a plethora of official and unofficial experts, it is much harder to carry out the same exercises on the Chinese economy.

The US constantly revises its official numbers whereas, for instance, China doesn’t revise its headline GDP numbers once they have been released.

It is what it is. There is nothing any of us can do to fix these issues in the short term.

But what is clear is we need a healthy dose of scepticism when we see a sudden surge in Chinese prices  without sufficient evidence supporting the sustainability of the increases.

Absolutely, time and again, China proves the sceptics wrong as it did last year with its tremendous export-led recovery. The Chinese government is quite simply superb at managing the country’s economy.

But last year’s export boom was already happening by the time people realised it was happening. Some of us were behind the curve.

In a nutshell, therefore, let me reiterate my very common warning: please, please be careful out there.