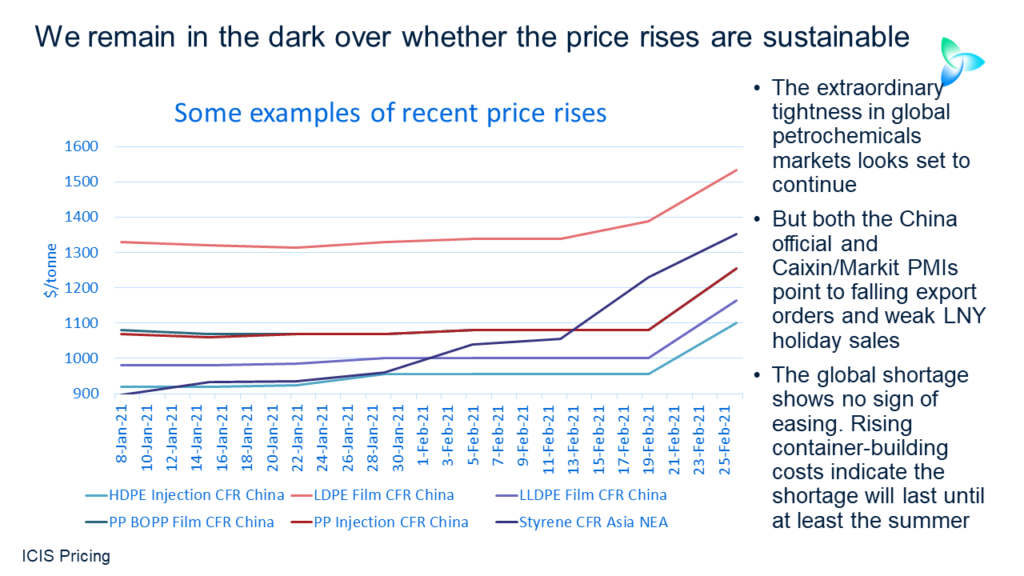 WE STILL DON’T have all the data we need to reach a firm conclusion about whether the recent surge in China’s petrochemical prices (see a few examples above) is founded on genuinely strong demand or just stocking-up by buyers in anticipation of further supply-driven price increases.

And even where we do have data, the accuracy of official government numbers can be sometimes questionable.

There is also the issue of interpretation of the official numbers. Take as an example two contradictory reports last week that said China’s Lunar New Year (LNY) holiday spending in 2021 was higher or lower than in 2o19. Only a comparison with the 2019 holidays makes sense as last year’s LNY holidays saw a major collapse of spending because of the coronavirus.

Remember this: from May onwards last year it became evident all was good with the Chinese economy because of the extraordinary growth in exports of finished goods, as China met the demands of our pandemic lifestyles. Exports of medical devices, such as face masks and hospital gowns, surged. So did exports of electronics, white goods, tins of paint and rolls of wallpaper, etc.

This led to big jumps in imports of petrochemicals. The increases in imports, including a 26% year-on-year rise in polypropylene (PP) imports during 2020, provided major support for the global petrochemicals industry because China dominates many global import markets.

The data that we do have include China’s official and Caixin/Markit Manufacturing Purchasing Managers’ Indices (PMIs) for February.

Let us deal with the official PMI first, which fell to 50.6 in February from 51.3 in January. The consensus is that there is nothing to worry about as the decline reflected the LNY holidays and the effects of China’s limited second wave of the pandemic, which occurred before the holidays. It appears as if the limited second wave is well under control.

But as Daniel Lacalle, economist and fund manager, wrote in this article: “What caused this slump? A drop in construction and a very poor reading of export new orders. The weak manufacturing and construction figures show that the ‘virtual’ celebration of this year’s LNY holidays had a more negative effect than estimated.

“Something is wrong when an export-led economy shows a massive slump in orders in the middle of a global recovery. The new export orders index fell into contraction territory for the first time since September 2020.”

Dr Lacalle suggested that the weakness in exports could be the result of rising input costs, the result of surging oil, petrochemicals, copper, aluminium and other commodities prices. The relative strength of the yuan and a double dip recession in Europe were other factors identified by Dr Lacalle. In 2020, China replaced the US as the EU’s top trading partner in dollar terms.

The fall in the Caixin/Markit Manufacturing PMI to 50.9 in February from 51.5 in January was attributed by Caixin to weaker overseas demand and China’s second wave of the pandemic.

The overall Caixin index in February was at its lowest level in nine months. A sub-index for production fell to 51.9, the slowest pace of expansion since April last year, while another sub-index for new orders fell to 51.0, the lowest since May.

Caixin also found that export orders shrank for the second month in a row as factories laid off workers for the third month in a row. The pace of redundancies increased in February.

It had been hoped that the global container shortage would have been resolved by the end of the LNY holidays. Now, though, experts are warning that the shortage will last until at least the summer.

The semiconductor shortage is expected to last until at least the second half of the year, possibly until the end of 2021. Global automakers will produce 1.5-5m fewer vehicles than had been planned because of the shortage, said consulting firm AlixPartners.

Right now, the chip shortage is only affecting autos production. But Samsung has warned that smartphone output might also be impacted. US power outages have forced US chip manufacturers to shut down, making the shortage worse.

But supply could remain very tight for considerably longer 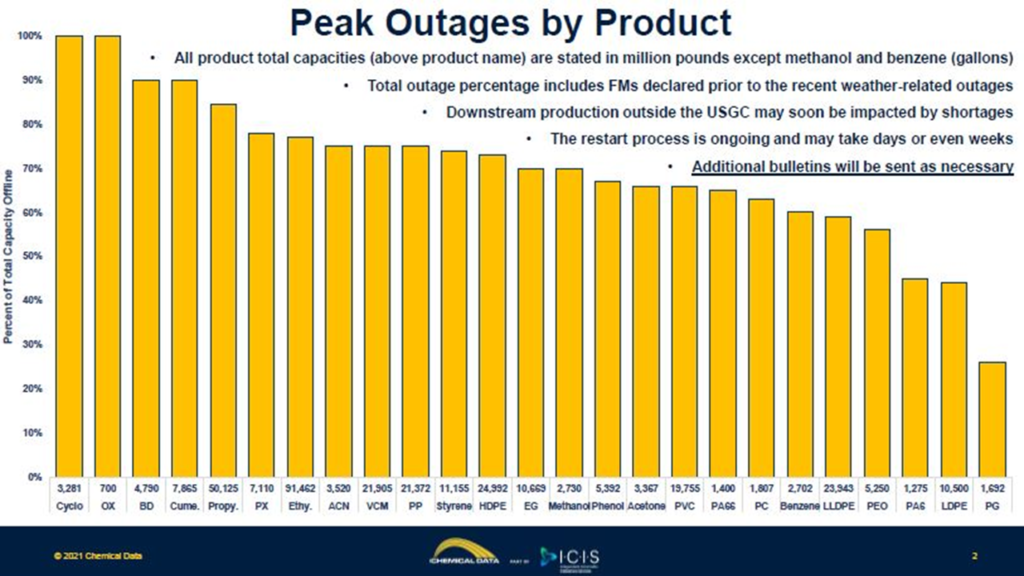 If China’s export trade is struggling and if its domestic economy is weak, this will of course make no difference to the immediate reason why global petrochemicals prices have gone through the roof: extreme supply tightness.

US petrochemical production losses are the result of the severe winter storms and the power outages that are also affecting semiconductor output. Petrochemicals capacity which is offline exceeds what has been typically shut down following hurricanes, said Chemical Data Intelligence (CDI), an ICIS service.

A further factor behind the global supply tightness is the reduction in feedstock availability from refineries. Since the pandemic began, refineries have been forced to cut operating rates because of the decline in gasoline, diesel and kerosene demand. The rate cuts have reduced the global availability of naphtha, propane, butane, propylene and other refinery-based petrochemicals and polymer feedstocks.

Turnarounds were also delayed last year due to the pandemic. Some of these turnarounds have been rescheduled to 2021 now that it is safer for maintenance workers to visit refinery and petrochemical plants in large numbers. Rescheduled cracker turnarounds are expected to add to the very tight conditions in Europe from Q2 onwards.

It could take days or even weeks for US plants to be restarted with restarts potentially hindered by shortages of nitrogen and limited rail-freight space, said CDI. The chart immediately above indicates by product the amount of US capacity that was offline at the peak stage of the shutdowns. The extent of the peak capacity losses points to gaps in supply that are not going to be easy to fill.

A factor behind the surge in commodities prices in general is confidence that the worst of the global pandemic is behind us.

This confidence is blending with the narrative that we are heading into a commodity price supercycle as economic recovery is buoyed by large fiscal stimulus programmes. The US House has, for instance, approved the Biden administration’s $1.9tr stimulus bill. The bill should clear the Senate.

And one can argue that because this year marks the politically sensitive 100th anniversary of the founding of the Chinese Communist Party, Beijing will launch a big domestic economic stimulus programme if exports have indeed slowed down. For whatever reasons, the Caixin/Markit February survey of confidence in the immediate future of the Chinese economy was at 63, the highest since last October.

But apparent demand, when producers take advantage of higher prices and buyers are forced to stock up to hedge against further price increases, is not always the same as real demand.

The China market has always been ambiguous, difficult to read and full of risks as well as opportunities because of the nature of the data.

At the moment, though, for the reasons I’ve detailed above, the data gaps are of more concern than usual because of signs that China’s critically important export trade might have slowed down – and because there is no conclusive evidence that the local economy is in healthy shape.

PREVIOUS POST Making all the stuff the world needs in sustainable ways is our defining challenge
NEXT POST Complexity of global PP demand post-pandemic: Three new scenarios for 2021-2025