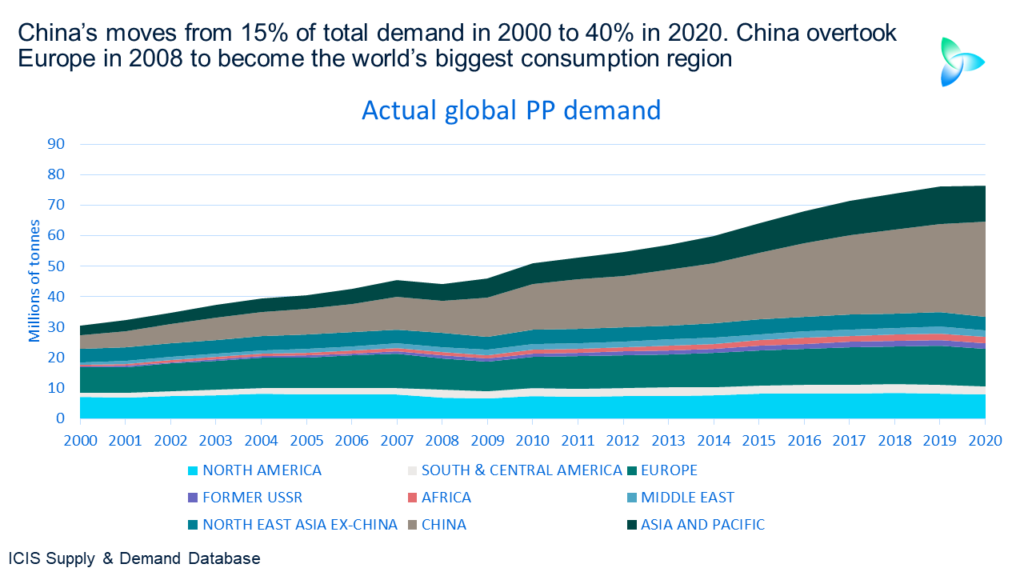 DO YOU have a dedicated team studying the policy outcomes from this year’s meetings of the National People’s Congress (NPC) and the Chinese People’s Political Consultative Conference (CPPCC) which began last Friday and finish on 11 March?

(These annual meetings are commonly referred to as the “two sessions”. For reasons described below, this year’s two sessions could, quite literally, set the direction of the global petrochemicals industry for decades to come.)

And will your team continue to monitor changes in government policy and how it is implemented in order to provide your petrochemicals company with constantly updated scenarios for global supply and demand over the next 20 years?

If your answer is “no” to either or both these questions, then I am sorry to say you haven’t been paying attention to the blog over the last eight years.

I am not proud, though, of my eight-year track record of flagging up the disproportionate importance of China to global markets as it is not long enough. The light only came on when I gained access to our excellent ICIS Supply & Demand Database (see the above chart as an example) and I began to analyse what the numbers were saying.

But the database shows that the critical tipping point for global markets wasn’t eight years ago but rather 12-13 years ago. It was in 2008-2009 when China became the biggest global consumer by volume across most of the petrochemicals and polymers, overtaking either North America or Europe.

I thought that when I first started doing my calculations, I had got my sums wrong and so went back and checked my calculations several times over. But, no, I was right. The above chart uses polypropylene (PP) as an example, but it is the same story in all the other polymers.

The NPC and CPPCC meetings, which occur every March, follow political meetings called Plenums which usually take place in October or November of the preceding years. I covered last November’s Fifth Plenum in a lot of detail.

Last November’s Plenum set the blueprint for China’s direction not just over the next five years – the length the country’s next Five-Year Plan – but also for the next 15 years. The NPC and CPPCC meetings will decide on the details to implement the blueprint.

But this won’t be the end of the story, far from it. Once we have the details about how China plans to move forward over the next 15 years, we will need to constantly monitor how government policy is being adapted and how effectively it is being implemented.

There are likely to be many minor, and possibly even major tweaks, to policies over the next 15 years and, policy implementation across such a vast country could be inconsistent.

Let me give you a historic example of how policies can change which is highly relevant for the petrochemicals business.

In 2014, the government decided to push much harder towards petrochemicals self-sufficiency, but when the policy shift was first announced the plan was to use coal as the main feedstock route. This made sense at the time because of China’s vast coal reserves and the need to improve economic growth in the poorer inland provinces, where most of China’s coal reserves are located.

But at the end of 2014, oil prices collapsed. This improved the competitiveness of naphtha cracking versus the coal-to-petrochemicals process.

Much more important than temporarily declining oil prices was rising public pressure over air, water and soil pollution – and, of course, the coal-to-petrochemicals industry has environmental problems. So, the decision was taken to build big new coastal, state-of-the-art refining and petrochemicals complexes that would be more environmentally sustainable.

The logic behind these complexes was that they would also help solve China’s geopolitical vulnerability to imports of transportation fuels and petrochemicals. This has become an even bigger priority due to China’s split with the US.

Well integrated refining-petrochemicals complexes, including a heavy focus on value-added polymers, were also seen as a means by which China could escape its middle-income trap.

Bang, we are where we are today. China may easily become entirely self-sufficient in PP, ethylene glycols, paraxylene and styrene monomer over the next 2-4 years. Keeping a close watch on government policy would have put you ahead of the curve in this major shift in global markets.

A summary of what to look out for 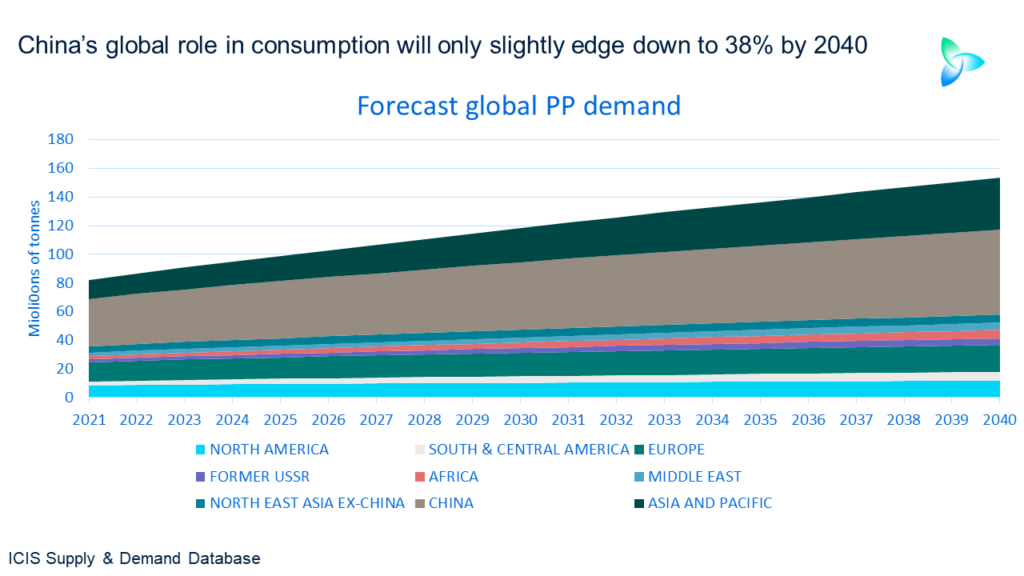 As the above chart illustrates, our base case sees China’s PP consumption continuing to dominate the global picture up to 2040. We see China’s demand growing from 33m tonnes in 2021 to 59m tonnes in 2040 with annual average demand growth at 3%.

But this strong growth is not a given as I discussed in detail before, during and after last year’s Fifth Plenum. China’s growth could be a lot lower than this with of course major global implications.

In summary on the economy, China faces a rapidly ageing population, and an economy that is too weighted towards exports and investments and not enough towards consumption. China has also had major geographical disparities in wealth. This  reflected in equally skewed levels of petrochemicals consumption between different regions.

You cannot, in my view, think of China as one economic entity. It is instead four distinct economies:

Also look out for policy details on how China plans to handle its environmental challenges and opportunities. Will China develop a modern, state-of-the-art plastics recycling business?

Will China walk its talk on being carbon neutral by 2060 by reducing carbon emissions at refinery-petrochemicals sites and all the way downstream to end-use markets? Might the plastic waste and carbon challenges lead to trade barriers that have a geopolitical aspect?

On the question of geopolitics, how will China’s policies towards the US shape up? Will the drift towards a bipolar world continue, leading to two very separate geopolitical and economic zones between which could flow very few tonnes of petrochemicals? Such an outcome could leave US exporters excluded from the biggest import markets in the world.

I will of course analyse the outcomes of the NPC meeting later this week or next. I will also continue to analyse government policy as best I can over the coming years. But, as I said at the beginning, you need a whole team of analysts. Contact me at john.richardson@icis.com  on how ICIS can support you in this work.