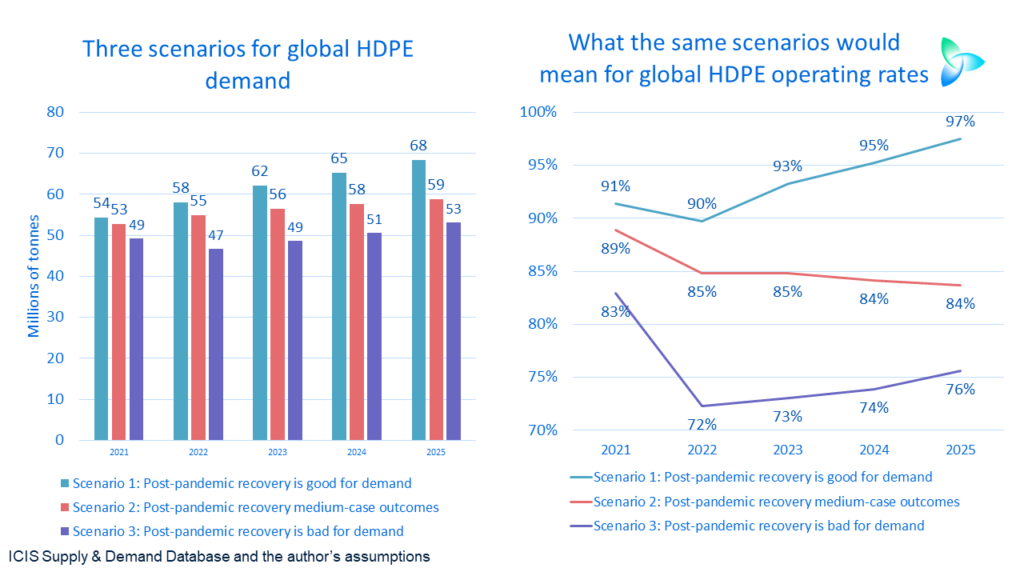 AT A TIME LIKE THIS, when petrochemicals and polymers prices are surging and margins for some products are also on the rise, it is very hard to cut out all the noise and focus on long-term analysis.

Nobody, of course, can afford to ignore the realities of today’s extraordinary markets, probably the tightest I have seen in the 24 years I have been working at ICIS.

For the big global “swing producers”, such as those in the Middle East and South Korea, the opportunities remain big to direct more cargoes to exceptionally tight markets in Latin America and Europe where netbacks remain stronger than in Asia.

In the key Turkish market, netbacks for polyethylene (PE) have also been at historic highs versus China and southeast Asia. I suspect it is the same for other products.

There are even continuing reports of PE re-exports from China. This is very, very unusual because China is normally in such a big PE deficit.

Traders obviously need to ride the wave of tight supply while it lasts. They must continue buying cargoes ahead of orders in anticipation of further price rises.

And the buyers of petrochemicals and polymers need to purchase ahead of their immediate raw material needs in say March to hedge against prices being even higher in April.

This applies both to the converters and the brand owners. Many brand owners either run their own conversion facilities or buy resins on behalf of their converters.

BUT you still need to filter out the noise and consider what happens when the exceptional tight supply we are seeing right now eases. Supply will of course at some point lengthen. Many of the plants that are offline must come back on-stream at some point.

Take the US as a case in point. ICIS expects that most US PE and polypropylene (PP) facilities will restart by mid-March after 3-4 weeks of lost production. We believe that the US market will remain tight throughout April and into May.

As you know though, the US is only one factor behind today’s exceptional tightness. Also crimping supply are more recent reports of outages in the Middle East.

Dating back to when the global pandemic began, supply of propylene, naphtha, butane and propane feedstock from refineries has been reduced. This is the result of refinery run cuts in response to the collapse of gasoline, diesel and jet fuel demand.

Confidence that the world is past the worst phase of the pandemic has buoyed oil markets as has the OPEC+ decision on 4 March not to add 500,000 bbl/day to production. Saudi Arabia announced, at the same meeting, that it would maintain its 1m bbl/day voluntary reduction in output for another month.

But, as I said, the tide of tight supply will have to turn at some point. So, every planner in every petrochemical producer, trading company and buyer must devote time to identifying the signals that point to when the market has turned.

Adding up plants and tonnes of production that were offline but are back online will only get you so far. The big $64,000 unanswered question remains the strength of real demand as opposed to the apparent demand that results from buyers stocking up ahead of further price prices.

Estimating real demand remains as much qualitative as quantitative because we lack many of the data points necessary to reach definitive conclusions.

There are two headline reasons for the lack of sufficient data points. Firstly, the complex interplay between today’s four global megatrends – the pandemic, sustainability, geopolitics and demographics – has completely upended the notion that you can link petrochemicals demand growth to GDP.

Secondly, there is the constant great China data black hole. This probably matters more than any of the other data gaps because of the disproportionate importance of Chinese imports, and overall Chinese demand, for the global petrochemicals business.

Building scenarios about what happens after supply tightness is thus essential

Because none of us have enough data sets – and also because of our insufficient ability to process the data we do have due to digitalisation being at an early stage of development – all we can fall back on is rigorous scenario planning.

You need upside, medium and downside scenarios for what could happen to pricing and margins once the extreme supply tightness is over. This is where ICIS can help. Contact us at john.richardson@icis.com.

To help get the process started, see below my three scenarios from last week for global petrochemicals real demand in 2021-2025:

Scenario 1: Petrochemicals demand could boom as high levels of personal savings are unlocked in the West and unprecedented levels of fiscal and monetary stimulus further buoy consumption. Australia has enjoyed soaring retail sales and a rebound in the housing market because it emerged from the pandemic several months ago. The rest of the West might follow, with the boom also boosting China’s critical export sales. It has been suggested that the next few years could be like the “Roaring 2020s”. During the 1920s, the global economy boomed after the Spanish Flu pandemic.

Scenario 2: Alternatively, the outcome could be neutral because consumption was already very good in 2020. As we emerge from the pandemic, there may be less demand for some of the goods we needed during lockdowns but more demand for “Old World” services such as travel. The extra demand from travel could be cancelled out by the decline in demand for the goods we no longer need.

Scenario 3: What about the risks of inflation? Demand could instead collapse as economies overheat and interest rates return to the levels of the 1970s (I think this is very unlikely). Or demand may fall because all the job losses caused by the pandemic are not fully compensated for by stimulus (I again think this is unlikely, but customers still need to plan for this downside scenario).

Note that these three scenarios only represent one level of complexity. These three outcomes only consider the impact on demand of the recovery from the pandemic. We also need to build into these outcomes the effects of the other three megatrends – sustainability, geopolitics and demographics. But at least this is a starting point for your scenario planning.

Now, following on from the work I did last week on global PP demand, let us consider what these three scenarios may mean for global high-density PE (HDPE). I will look at low-density PE and linear low-density PE in later posts.

I don’t believe that global interest rates will be any higher than 3% over the next few years and will certainly be nothing close to the levels of the 1970s. In the US during that decade, interest rates reached a high of 20%. Such a rate is barely conceivable for a generation that has grown up in a world of historically very low borrowing costs.

But let us assume I am wrong. Under Scenario 3, inflation runs out of control requiring interest rates much higher than 3%. Or deep economic scarring left behind by the pandemic is not fully compensated for by fiscal and monetary stimulus.

Incremental improvements are better than nothing

Modelling the impact of say government policy on petrochemicals demand is hugely difficult.

You must firstly find all the details of polices country by country. Then you need to evaluate how effective you think the policies will be in addressing economic scarring and in persuading people to open their wallets. Savings rates, as mentioned above, have risen in the West despite the big stimulus programmes that have already

The other key requirement is, I believe, attempting to better assess demand all the way downstream to the supermarket shelves and the car showrooms.

A lot of the retailers have potentially hugely valuable data for the petrochemicals industry. But will they share it? And how do we process these vast quantities of data without major leaps forward in digitalisation?

But if we can incrementally nudge forward to better measures of demand this will be progress. The doable is likely to be always less than the ideal.

And we must not only depend on adding up the number of plants that have shut down or have restarted while assessing petrochemicals growth as almost straight-line patterns linked to GDP.

If we only rely on the old methods, petrochemical producers, traders and buyers will continue to be blindsided by events. They will continue to respond after the fact to movements in markets, thereby leaving many hundred million dollars of earnings on the table.