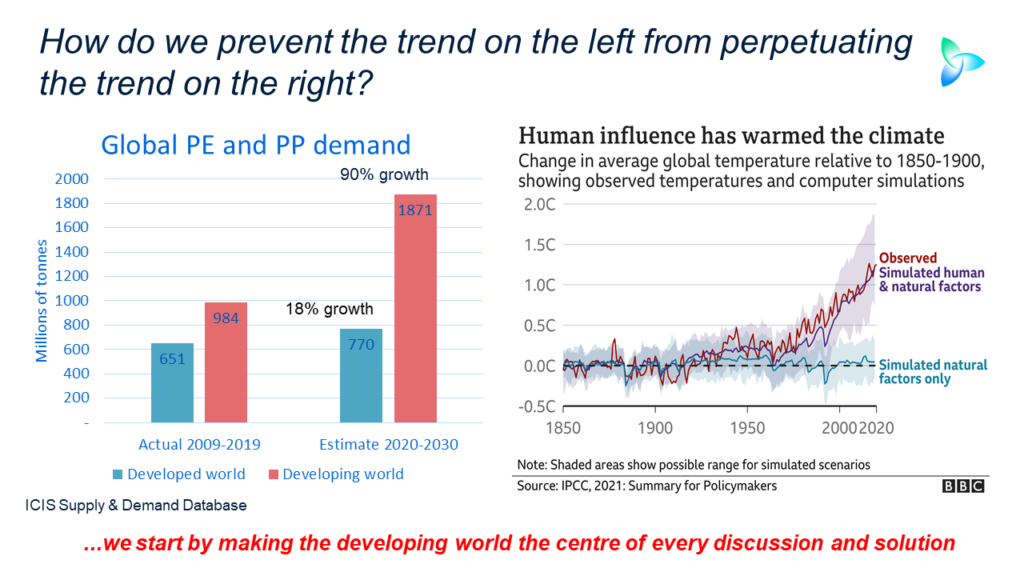 THE LATEST Intergovernmental Panel on Climate Change (IPCC) report makes grim reading if you support the science-based argument, as I do, that we are causing very serious damage to our climate.

We must, in my view, start with how we talk about the climate change challenge if we are to solve this crisis.

Most analysis and commentary is very Western-centric. I see it as essential that we more broadly recognise the split between the economic, political and social realities of the developed versus and the developing world.

Until or unless the developing world is at the centre of everything we discuss and then every decision we take we will get nowhere. The laws of supply and demand (see the above chart on the left) tell us this.

Nobody wants to turn their back on economic progress. We can all agree that the provision of more basic needs – energy, transport, shelter, potable water, modern-day sanitation and safe good – is essential as the battle against extreme poverty continues.

The petrochemicals industry provides products and services that play a huge role in meeting these needs, including speciality grades of low-density polyethylene (PE) that insulate electricity cables and PE films that ensure much more food gets to people in a condition safe for consumption. Also consider polyvinyl chloride water and sanitation pipes.

We must accept that people in the developing world are entitled to things that we in rich countries take for granted, such as private motor transport, smartphones, TVS, computers and game consoles.

Some of the above one can view as luxuries, such as game consoles. But there would be somewhat of a double standard if, as part of the “less is more” argument, supply of luxuries was rationed for the sake of the carbon balance – as most children and adults in rich countries already own game consoles.

Ownership of a good-enough smartphone has become central to economic competitiveness. A small businessperson in Ghana needs to complete with other small businesses in Ghana. She/he can only do this by being able to efficiently arrange meetings, quickly contact the bank and do accounts on the go.

If the above chart therefore came true, this would a good thing as it would represent great economic and societal progress – a narrowing of the huge wealth gap between the developed and developing world.

The chart shows actual demand in 2009-2020 for PE and polypropylene (PP) in the developed versus the developing world. Also detailed are our forecasts for demand in 2020-2030, divided again into the mega-regions.

This  forecast growth is therefore I believe desirable – a good thing. The question is not whether this should happen; it is instead how we meet this extra demand sustainably.

As I discussed last month, every carbon mitigation solution will only be effective if it works on the ground in the developing world, in very different logistical, social, economic and political conditions to those in the rich world.

Take distributed power. Great in principle, but where is the investment going to come from for all the solar panels and battery storage that will be required?  If the investment doesn’t come, the incumbent energy providers will build more coal-fired power plants in countries that have big local coal supplies such as India.

Distributed power has huge potential to provide electricity to some 10% of the global population that lack access to it.  But the free market by itself is not, in my view, going to come anywhere close to providing the infrastructure investments required.

We also need to provide the big resources to shut down existing coal plants. In 2020, electricity generation from coal stood at 71% in India, 61% in China and 60% in the world’s fourth-most populous country, Indonesia.

We also need to think what motivates energy and petchem companies

Pressure on Western International Oil Companies (IOC) and standalone petrochemical companies will continue to shape their strategies. We should expect more limits on their carbon emissions following the June success of environmental lobbyists  at Shell, ExxonMobil and Chevron.

Financing is the other big issue for Western oil companies, or rather lack of it, unless they continue to walk the talk on emissions reductions. Funding for new hydrocarbon projects will, I think, become ever harder to come by from investors such as BlackRock.

But the National Oil Companies (NOCs) are in a very different position as they are of course state-owned and so state-financed to a significant extent. Plus, the NOCs operate oil and gas assets in countries where the reserves are essential for the continued economic, political and social stability of the countries.

Look again at the above chart on the left. Turning more and more oil into petrochemicals would help compensate for declining demand for oil as transportation fuel, as electrification gathers pace in Europe.

And the revenues from meeting all this extra PE and PP demand in the developing world would be big, especially when you consider that the IOCs might be less able to expand to meet growth.

The danger is clear therefore – a divided world where the IOCs go in one direction towards greater emissions reductions and the NOCs go in another direction.

Data from the International Energy Agency already show that as emissions in the developed world have fallen since the pandemic began, they have increased in poorer countries.

How do we prevent this trend from continuing? By starting with the recognition that everything we do – from the tone of the discussion to the framing of legislation down to, as I said, the practicalities of specific technology solutions – MUST be placed in the context of the developing world.

If we don’t get this right, then the worst scenario on the right – from the latest IPCC report – will continue.