The views expressed in this blog are, as always, my personal views and do not represent the views of ICIS. As always, also, they are here to be challenged with alternative views supported by the data. Thank you! 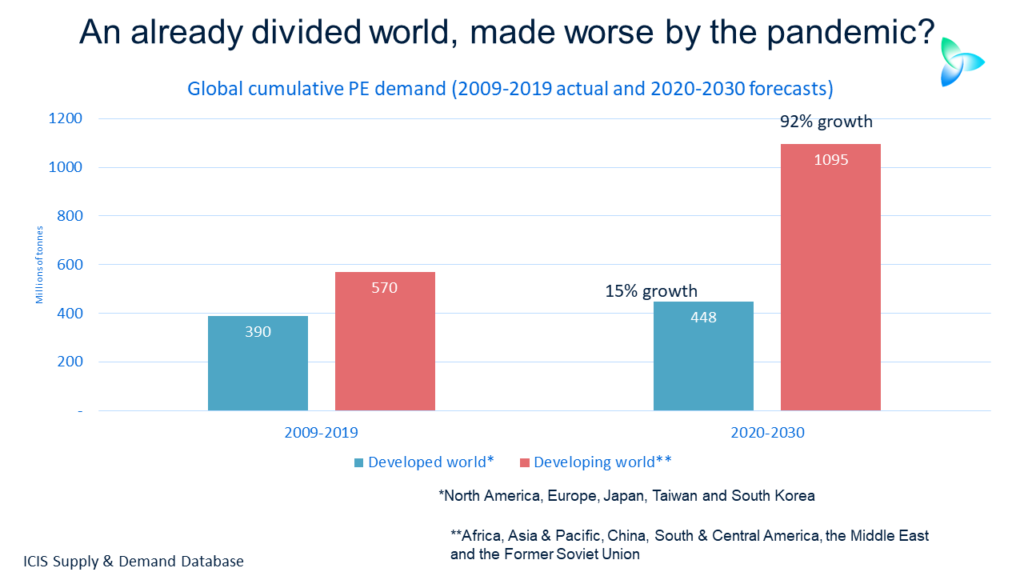 EVERY SOLUTION to the biggest challenges our industry faces – which of course are carbon emissions and plastic waste – must in my view be road tested to see if they work in the developing world.

If they don’t work in the developing world we are not going to get anywhere in solving the environmental crises, as the slide above tells us.

And the solutions must very obviously be adequately financed. Nobody should fall into the trap of underestimating the scale of decarbonisation costs.

My arguments start with a basic economic concept we are all familiar with, which is supply and demand.

Future supply of petrochemicals must be provided to meet booming demand. The centre of demand growth over the next 20-30 years is inevitably going to be in the developing world.

Unless the supply to meet this demand is sustainable – with most of the new capacity very likely to be built in the developing world to meet local demand – we are going to get nowhere.

We might even go backwards. The rise in emissions and plastic waste in the developing world could so easily overshadow reductions in the developed world.

Referring again to the slide above which uses polyethylene as an example – and the same patterns apply to all petrochemicals and polymers – the data tell us:

Petrochemicals are a vital raw material, a building block for just about all manufactured goods.

Making petrochemicals and finished products in non-sustainable ways in the developing would guarantees that carbon emissions and plastic waste on a global basis will continue to rise.

What applies to petrochemicals and their finished products applies to transportation fuels as the chart below, from the BP Energy Outlook 2020, indicates. 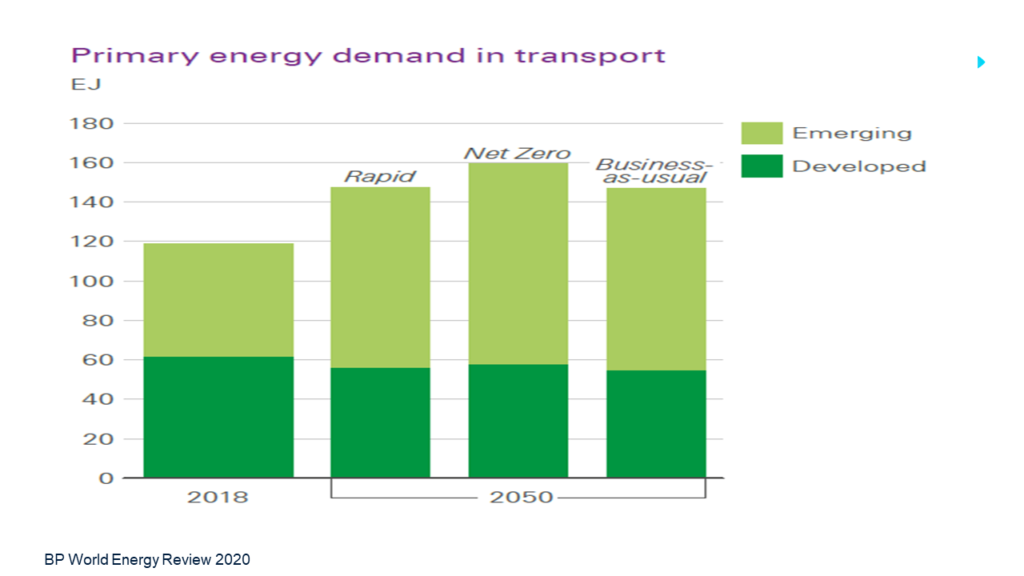 Under all three BP scenarios – Rapid (rapid decarbonisation), Net Zero (the medium-case outcome) and Business as Usual – the developing world’s share of transportation demand increases up until 2050.

The risk is that coal fills this gaps unless vast resources are provided for a huge build-out in distributed power based on solar energy.

Who is going to supply all the ethylene vinyl acetate necessary to make the encapsulants for the panels?

More fundamentally, what about the dreadful state of roads in many countries in Africa? There’s not much point in owning a vehicle of any kind if you are unable to get from Point A Point B.

Coal, as with oil and gas, is a vital resource for many developing economies, in India and China, most importantly because of the size of their populations and their economic heft.

Inevitably, therefore, without the right road-tested practical solutions – and without adequate funding – the National Oil Companies (NOCs) will fight tooth and nail to maintain oil, gas and coal production.

Some good news was that for the first time since China’s Belt & Road Initiative was launched in 2013, China funded no new overseas coal projects in the first half of this year.

This could be a crucial step in the right direction because China is responsible for the funding of more than 70% of the world’s new coal plants.

But, as I said, nobody should expect the NOCs to abandon their existing business models – which are vital for their continued prosperity and the countries in which they operate – without a great deal of financial support.

The vast sums required to decarbonise the developing world can, in my view, only come through the introduction of a global carbon tax that would a.) provide the incentives and penalties to force through change, and b.) generate the necessary revenues.

The scale of the challenge we face was highlighted by  last month’s G20 meeting in Naples which ended with no agreement to phase out subsidies for fossil fuels and the use of coal. Resolutions to these effects were vetoed by Russia, China, India and Saudi Arabia.

Highlighting the scale of the challenge is the chart below, from the excellent Our World in Data service. It shows the percentages of electricity being generated by coal by country in 2020. The darker the shade of brown the higher the percentage. 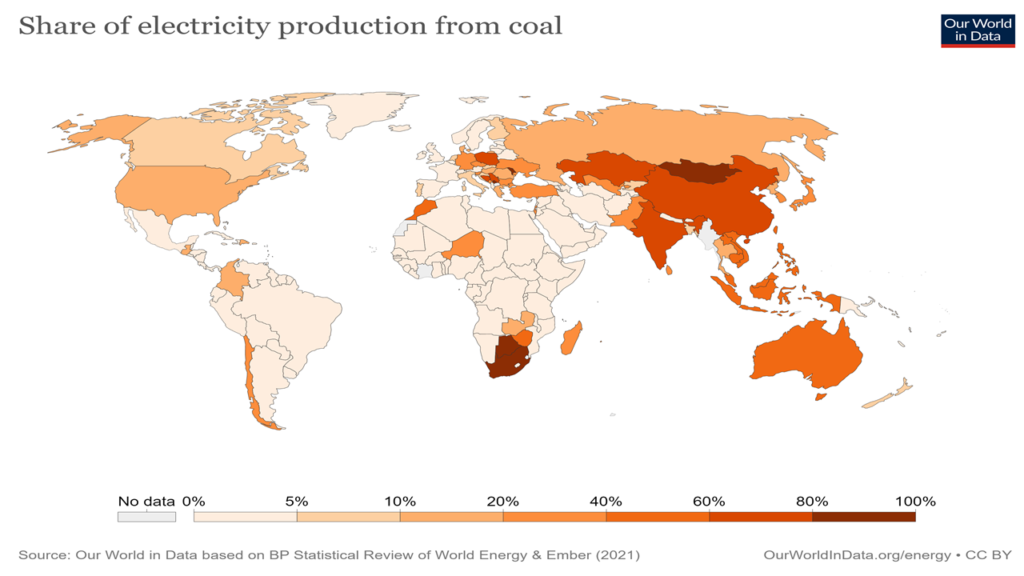 In 2020, 71% of electricity generation in India came from coal, 61% in China and 60% in the world’s fourth-most populous country, Indonesia.

The developed w0rld isn’t always leading by example as in Australia, the percentage was 54% and in South Korea 36%.

Returning to the subject of practical solutions, what works on the ground is likely to involve a package of different decarbonisation and plastic-waste mitigating technologies.

On the subject of plastic waste, chemicals recycling is an example of a solution that by itself will, I believe, have limited value in the developing world

If, say, a chemicals recycling plant is 10,000 tonnes/year then you would require more than 400 new plants to replace one 1.5m tonne/year cracker that wouldn’t be built (this is based on around 3.3 tonnes of naphtha being required to produce a tonne of ethylene).

Look again at the chart at the beginning of this post. There is simply no way that chemicals recycling can be scaled-up to supply the huge am0unts of new petrochemicals demand in the developing world.

To solve the plastic waste crisis in the developing world a package of road-tested solutions is therefore the answer, including perhaps some chemicals recycling, but crucially, also, adequate rubbish collection systems for the 3bn people who lack the systems.

Re-use seems to have a lot of potential in the developing world. People on very low incomes, where saving 10 cents is vital, would likely be very receptive to, say, re-using the same polypropylene shampoo bottle by refilling it in a local shop. Redesign will be necessary to achieve this.

The EU’s Carbon Border Adjustment Mechanism and a divided world

Don’t get me wrong, I think the legislative and technological solutions being developed in rich countries are ground-breaking and hugely innovative.

An example of the right kind of legislation – which is detailed in this thoughtful Insight piece by my colleague Joseph Chang and in this ICIS Think Tank podcast – is the EU’s Carbon Border Adjustment Mechanism (CBAM).

As the cost of carbon emissions rises in the EU, the concept behind the CBAM is to create a level playing field for local manufacturers who would otherwise face imports from regions not following as stringent a carbon regime as the EU. Import levies would be applied to countries with lower compliance.

For the time being, the CBAM would apply to imports of cement, electricity, fertilizers, iron and steel, and aluminium.

But as Florian Rothenberg, ICIS carbon and power analyst, said in the podcast: “The aim of the CBAM is to cover all sectors in the future. With the gradual phase-in of the CBAM, the European Commission [could] set up rules to include other sectors as well. The chance of this is high, probably not in the next five to six years but rather 2030 or even after that.”

The good news is that the European Commission has devised the CBAM with a global mission in mind.

“This will ensure that European emission reductions contribute to a global emissions decline, instead of pushing carbon-intensive production outside Europe. It also aims to encourage industry outside the EU and our international partners to take steps in the same direction,” said the Commission.

More good news is that the US might follow suit, as the insight article also details. The American Fuel & Petrochemical Manufacturers (AFPM) has said that any US carbon pricing policy would have to consider a border adjustment tax for imports.

“If the US were to adopt a carbon pricing policy, we certainly think it would be important that there be some sort of border adjustment. We would think that any policy in the US should not disadvantage US manufacturers…A border adjustment [tax] would be critical,” said Chet Thompson, president and CEO of the AFPM in a May interview with ICIS.

But the economic and humanitarian crises confronting the developing world as a result of the pandemic should not be underestimated. Infection and death rates are rising as already weak healthcare systems virtually collapse.

The Delta variant means that the global full vaccination rate might have to be as high as 95% to achieve herd immunity. The chart below, again from Our World in Data, reminds us of just how far the developing world is from this target. 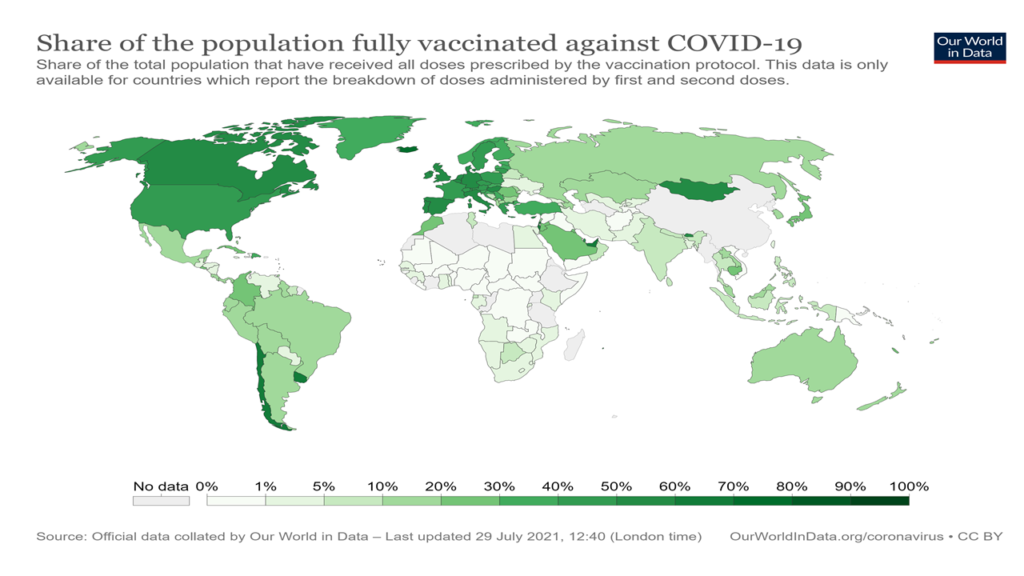 The darker the shade of green the higher the vaccination rate. As of 28 July, just 7% of people in India and Indonesia had been fully vaccinated. Nowhere in Africa was the rate over 10% and in Sudan it was just 0.4%.

Imagine, therefore, a bleak outcome for the world in 2025. Here is how the world could look:

Recognising the biggest problem is the first step

I believe that too much of the decarbonisation discussion focuses on the idea of osmosis, that best practices and technologies will inevitably flow from the rich to the poor world.

For the reasons highlighted above, I see nothing inevitable about this process unless or until the developing world is provided with the right levels of incentives and financial support.

We need to start is by recognising that the developing world must be front and centre of every discussion. This recognition will come from looking at the kind of data highlighted in the charts in this post. We must be data-led.

The danger is of course that the scale of the challenges deter us, leading to resignation to failure – and I see a global carbon tax as big ask socially, economically and politically.

So, the short-term way forward brings me back to the beginning – practical on-the-ground incremental solutions, road-tested in the developing world,  which will often be c0untry and region specific. The solutions can edge us closer t0 our goals.

We cannot afford to give up as these challenges are existential.