Home Blogs As the drift towards a divided world continues, here are some climate change realities

As the drift towards a divided world continues, here are some climate change realities

Note that, as always, the views expressed here are personal. Thank you.

Now let us look at my arguments in detail. 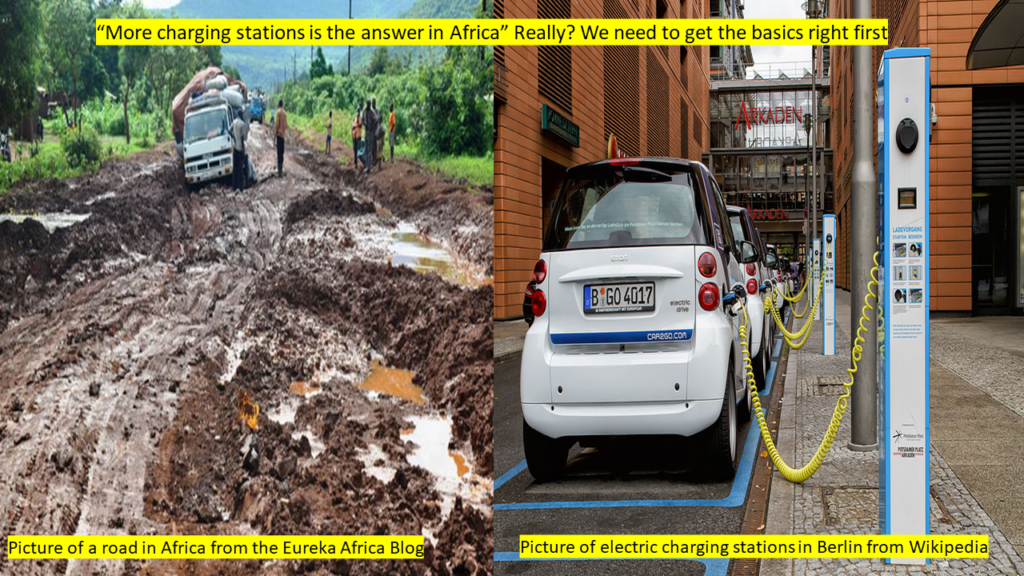 BP, SHELL and Chevron etc. are under a constant environmental spotlight. But as Angela Wilkinson, head of the World Energy Council told the Financial Times, very little attention is being paid to the state-owned companies during a period when they are expanding their carbon footprints.

For instance, Saudi Arabia plans to raise oil production to 13m bb/day from 12m bb/day with Abdulaziz bin Salman, the kingdom’s energy minister, suggesting that output could go even higher.

As the IOCs sell-down hydrocarbon assets in order to reduce their emissions, their state-owned counterparts in the developing world – the NOCs – are buying some of these assets.

Only a handful of the state-owned companies have committed to achieving net zero emissions, the FT added in the same article. Those which have made commitments include Petronas and PetroChina.

But getting any kind of data out of state-owned companies is viewed as difficult. Even if more of the NOCs make commitments to net zero, how will we effectively audit their progress towards meeting targets?

And should we count the divestment by an IOC of an oil and gas asset towards a reduction in its carbon output if the asset ends up in being bought by an NOC or a private equity company? Isn’t this just shuffling the pack – moving the carbon emissions somewhere else?

Let us start by building decent roads in Africa

These are important questions raised by the FT article which need to be addressed. But even if they are addressed, we are not going to get anywhere unless we adequately fund the energy transition.

There is limited value in pressurising individual companies unless we provide the funds needed to achieve a truly global transition.

The money required is huge. The Economist, for instance, estimates that another $35tr of investment in green energy is needed by 2030 to keep us on track to net zero emissions.

Adam Smith’s “invisible hand” of the market will not by itself suffice work as capital will flow to where the returns are the highest, I think.

Right now – as you can see from the FT article – a lot of money is flowing into buying-up hydrocarbon assets because oil prices are going up, with global supply perhaps tight over the next few years. This the “invisible hand” of the market in action.

If Joe Biden cannot get the $15bn he wants to spend on electric charging stations through the Senate as part of his infrastructure bill, then perhaps the US free market will fix the problem if demand for snazzier and more efficient electric vehicles takes off. Private investment may meet the shortage of charging stations.

But in Africa as well, really? Many countries in Africa firstly need vast investments in decent roads as the character from the West Wing, CJ Cregg, so eloquently highlighted in the show’s final series. 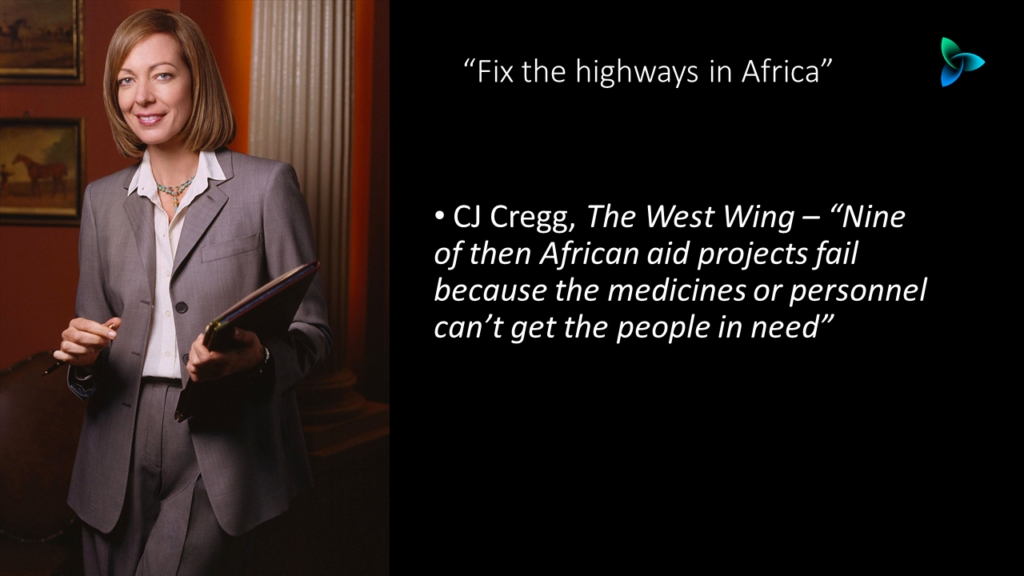 ‘Nine out of ten aid projects in Africa fail” because of a lack of decent highways, said CJ. Not much seems to have changed since the episode first aired in 2006, according to the data I can find.

According to this 2018 Eureka Africa blog post, from which half of the above photo montage came:

Building decent highways to move from Point A to B – on board any kind of motorised transport – is a bigger priority for many African countries, ahead of installing electric charging stations that very few people would anyway be able to use.

The difficulty is that there isn’t much if any profit in building highways, decent sanitation and electricity supply.

The $35tr estimated by The Economist to pay for the energy transition is probably just the tip of the decarbonisation investment iceberg.

Below the surface is the money that needs to be spent on meeting basic needs in poorer countries. This money cannot be entirely provided by the mechanisms of the free market, in my view.

Only when and if this funding has been provided can poorer countries start to even contemplate what the energy transition would mean for them.

The NOCs lack the money and the motives to change

Before NOCs are lambasted for spending more rather than less money on producing hydrocarbons, consider this: the oil and gas still in the ground is the No1 state asset for countries such as Saudi Arabia, Abu Dhabi, Kuwait, Oman, Qatar, Iran, Malaysia and Nigeria.

To suggest that these countries should suddenly switch to solar energy and to electric vehicles while turning down their oil and gas production flies in the face of economic, political and social reality.

Yes, granted, the state-owned energy majors have big resources. But even for the NOCs, finding the revenues necessary for innovation on the scale needed to entirely replace oil and gas in the energy and petrochemicals sectors is a monumental task.

For example, the jury is still out on electrification of transport because of the spending needed on new infrastructure and weaknesses with current battery technologies. I also believe that plastics recycling technologies will not be sufficiently scalable and economic.

The future demand growth opportunities in the developing world for pursuing “business as usual” are also enormous. 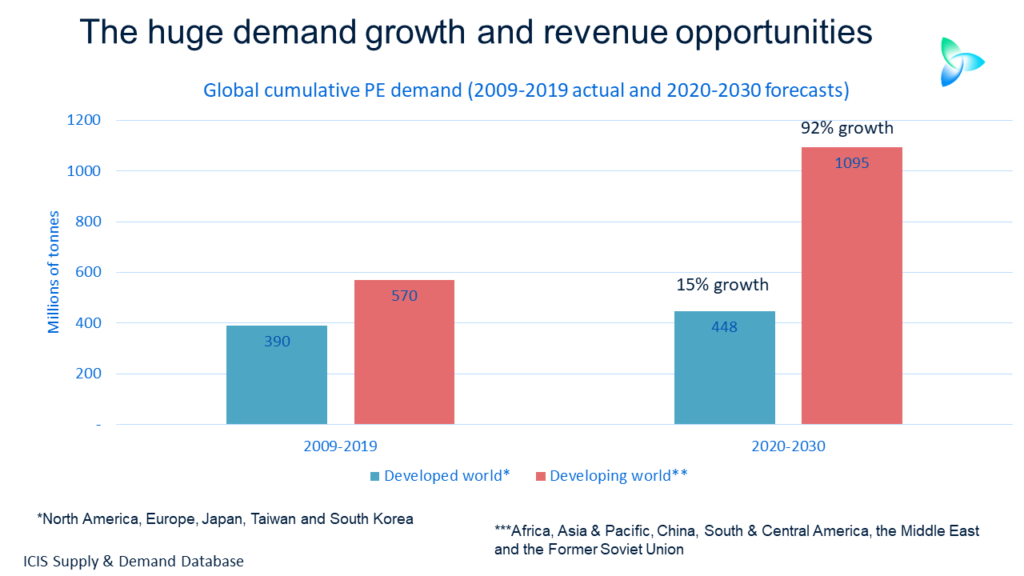 Why would the NOCs want to turn down an opportunity on this scale, especially given that developed world countries will find it a lot harder to build new PE plants because of environmental pressures?

War and poverty: we must meet the supply that is needed

This gets me onto one of my favourite themes, which is this: the products and services that our industry helps manufacture are lifesaving and life enhancing. This is not some soft and fluffy marketing blurb for a corporate brochure. It is instead the truth.

Then consider all the medical devices, the blood bags, the hospital gowns, the bed sheets, gloves, syringes and pharmaceutical packaging that cannot be made without petrochemicals.

As many millions more people escape extreme poverty in the developing world over the next 20 years and move into “middle income status”, basic mobile phones and computers, TVs, refrigerators and washing machines will become affordable. Again, none of these things can be made without petrochemicals.

Providing enough petrochemicals to meet the demand for these goods will, in my view, be simply impossible without building lots more steam crackers and reformers.

As I said, I  also believe that recycling technologies will not be sufficiently scalable and economic.

And do we really want to say to millions of women in the developing world – and, sadly, it is still mainly women because of the stereotyped roles for the sexes – that they cannot own washing machines for the first time because of the carbon balance?

This would represent denying women the opportunity to escape the time-consuming drudgery of hand washing – time that they could better spend on say going to evening classes.

Managing the carbon balance with the technologies we have

Electrification of transportation may well play a big role in reducing emissions in developed markets – and eventually in the developing world once the more immediate challenge of building adequate roads is met.

But oil will surely continue to play a major role in transportation in the developing world because of the huge costs and complications of electrification.

Oil prices over the longer term are also likely to be under downward pressure from the rise of electric vehicles.

This makes the following scenario easy to imagine. An NOC approaches an African government and says, “Look, we have a lot of oil and transportation fuels to sell to you on favourable terms. Let us structure a ten-year supply deal that will support your economic development.”

Why under these circumstances would an African country electrify is transportation, once it has the roads to be able to even think about this?

Why would it convert its power generation to renewables if the same NOC is supplying it with natural gas, also on favourable terms?

I believe the focus should be on reducing carbon emissions from the technologies we already have that are capable of meeting demand.

For example – as we discuss in this week’s ICIS Think Tank Podcast – blue and green hydrogen offer a lot of promise.

They can become globally traded products if the right infrastructure is put in place, resulting in substantial reductions in carbon emissions from refining and petrochemicals.

Ammonia and methanol production via traditional grey hydrogen, for example, emits 670m tonnes/year of carbon dioxide, according to an ICIS estimate.

A global carbon tax is essential

The IOCs are facing sufficient pressure from investors to cut back on carbon, but, as we have seen, this is not the case with the NOCs.

Here is the rub: publicly listed energy majors account for just 12% of oil and gas reserves, 15% of production and 10% of estimated emissions from industry operations, says the International Energy Agency.

What we need is a global carbon tax. This would result in financial penalties forcing changes in everyone’s behaviour.

The NOCs would then be compelled to move into the same direction as the IOCs. The tax would also provide the revenues to enable both the NOCs and IOCs to accelerate innovation in carbon management.

And perhaps, also, some of the vast revenues that such a global tax would generate could be used to meet basic needs in the developing world.

Until or unless we firstly recognise the need for such as tax, I worry that we will get nowhere. But how many politicians and business leaders even support the idea of a global tax on carbon?

PREVIOUS POST A deep dive into HDPE and PP: opportunities and challenges for H2 this year and 2022
NEXT POST China, China and China: the three global polyolefin market drivers during the rest of 2021