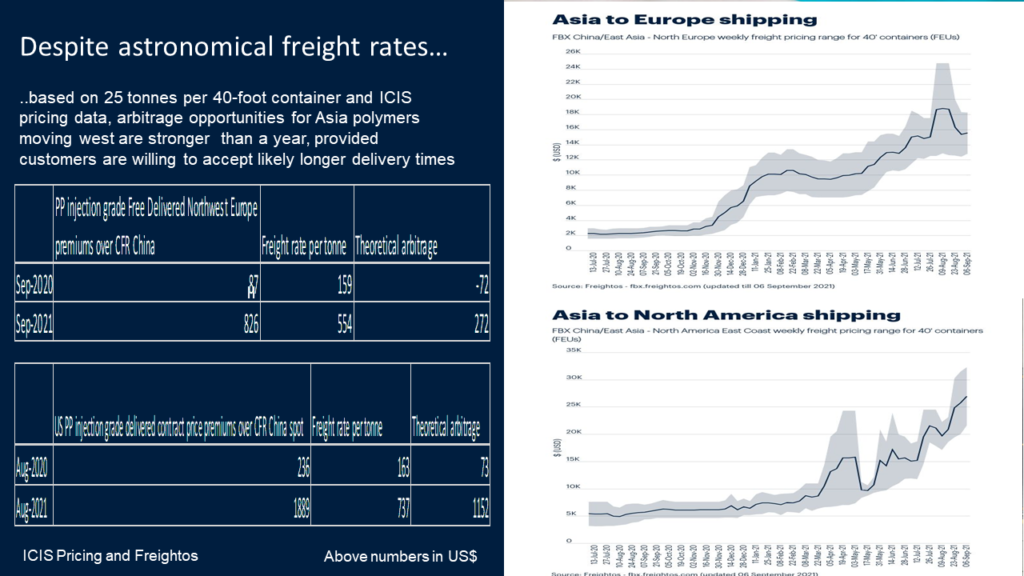 IT IS VERY HARD to see how we will get out of this container crisis anytime soon. The crisis looks set to last until at least the middle of next year.

The crisis could get even worse because of our over-reliance on China to make most of the things we need for our lockdown lifestyles.

The priority is to get containers to China, very often empty, to feed the rich world’s demand for physical goods, spending on which has soared because the pandemic has reduced the demand for services such as hotels, restaurants and flights.

This has already led to some shipments of polymers from Australia to New Zealand being cancelled, with the containers instead routed to China. Might we see more of these kinds of trade distortions?

And if freight rates remain at today’s extraordinarily elevated levels, the motives for shipowners to try and lock charterers into multi-year contracts will remain strong.

This had to led to reduced availability of short-term charters, with some of the charterers understandably reluctant to lock themselves into long-term deals given today’s high prices.

The lack of short-term charters, typically three months, combined with the reluctance to sign up for long-term deals has exacerbated shortages on some routes. This is again a problem that could get worse.

This video, on the excellent Freightos website, discussed low inventory levels up and down manufacturing chains because manufacturers have struggled to build stocks

So could peak seasonal demand. We are in the middle of a peak season at the moment as China ramps up its manufacturing to get goods on the shelves in time for Christmas.

Then we will likely have a lull, some relief on freight rates, perhaps, followed by the pick-up of demand at the end of the next Lunar New Year Holidays in China. Next year’s official holiday dates are from 31 January to 6 February.

The impossibility of predicting demand

What we simply don’t know, though, as this is impossible to predict, is the extent to which there is going to be a cycle out of goods and into services over the next six to 12 months in the developed economies.

The impossible-to-assess variables include the progress of the Delta variant versus policy responses at local as well as national levels.

The more draconian the lockdowns, the greater the persistence of strong demand for goods as money doesn’t seem likely to be the problem in the rich world. Borrowing costs at record lows mean governments can more or less spend what they like to maintain economies.

Cities and counties going through constant cycles of closing down and opening up across a vast country such as the US makes assessing demand, as I said, impossible.

Or maybe long delivery times for exercise bikes, computers and game consoles – if they can be purchased at all –will lead to consumers cutting back on discretionary spending, even though they are flush with cash.

This suggests, however, that the first sign of supply chains easing up slightly on weaker demand for physical goods would release pent-up demand. We’d then be back to square one.

Yet another wild card is the pace at which we reach adequate vaccination rates in the developing word.

Turning again to Our World in Data, as of 11 September, 12.5% of the Indian population was fully vaccinated and 15% in Indonesia. Other than Morocco, every African country was below 10%.

Until we reach at least 80% full vaccination rates in the developing world, Delta and perhaps even more virulent strains of the virus will have the opportunity to spread and mutate globally, risking further port lockdowns.

A two-day lockdown at one port can cause two-week delivery delays elsewhere because the global container freight system is so interconnected and finely balanced, said Freightos.

Here is the thing as well: evidence from Israel suggests regular booster jabs will be required once people have been fully vaccinated. This could mean the developing world ex-China is several years away from an adequate vaccination level.

A further complication, and I am sure I’ve only scratched the surface here, was highlighted by this BBC article when it wrote that for decades, container ships had become bigger and bigger.

But such ships require large, deep ports and giant cranes, which limits where they can go. They also place heightened demand on resources at the ports that they can use.

So perhaps a greater number of medium-sized vessels need to be built to make supply chains more resilient in the future? This would, though, require a big shift in the container shipbuilding industry.

The BBC added that there was also a reluctance by shipowners to commit to new vessel orders because of new regulations on shipping emissions that could come into force in 2050. The UK is calling for zero emissions from shipping by that year.

Yet another problem is a global shortage of lorry or truck drivers to deliver containers to ports and gets goods to people. The UK is for instance short of more than 100,000 lorry drivers, again according to the BBC. This is another problem that cannot be fixed anytime soon because of the need to find and train the extra drivers.

What this means for the global polymers industry

The International Monetary Fund has caught up with what I’ve been warning about since last year.

In a July paper this year, it highlighted the risk of a two-speed, divided world with very different economic growth prospects linked to vaccination rates in the developed versus the developing world.

In a series of client presentations over the last two weeks, I’ve presented my latest downside scenarios for global 2021-2025 high-density polyethylene, linear low-density PE and polypropylene (PP) demand compared with our ICIS Supply & Demand base cases.

In all the presentations, clients asked whether I was being too optimistic to assume a strong return to growth in the developing world in 2023, based on adequate vaccination levels in that year. They could be right.

It is a vicious circle. The longer it is before adequate vaccination rates are reached in the developing world, the more the potential damage to the region’s polymers growth – and the longer it could remain difficult to export polymer capacity to the rich world because of disruptions to port activities caused by the pandemic

Meanwhile, consumption in the rich world may remain strong regardless of the progression of the pandemic. Extensive lockdowns or no extensive lockdowns, the fundamental nature of demand has shifted so much in developed countries that firm demand always seems guaranteed.

This has so many social, political, economic and environmental implications that it is impossible to adequately detail all of them in this post. So, I will leave these issues for later.

But for now, there are three things that polymer producers in Asia need to plan for:

The irony in all this is that as markets have become more regional, the benefits from greater globalisation – selling bigger volumes of polymers to non-traditional markets further afield – have increased.

As always, I hope this blog has helped support your business. Contact me at john.richardson@icis.com  if you need any further help.

PREVIOUS POST Latest data show China could become PP net exporter by 2026 and net exporter of 3.7m tonnes in 2031
NEXT POST The perils of Evergrande for China and world polyolefins demand