PLAYING “What if?” games by changing the course of history is popular amongst students of the subject, including myself.

Imagine, therefore, in our world of petrochemicals, if China hadn’t decided in late 2008 to launch the world’s biggest-ever economic stimulus package to compensate for the Global Financial Crisis.

Beijing felt it had no choice at the time because of a government estimate that some 20m citizens might return from the countryside to the cities after the Lunar New Year Holidays in 2009, only to find that their jobs in export-focused factories had disappeared.

China was in a rush to replace export-led growth with more local-for-local consumption, because of the collapse of overseas global demand resulting from the Global Financial Crisis

When things are rushed, there’s a higher chance they can go wrong. We ended up with factories being built almost solely for the economic multiplier effect from construction activity without sufficient regard for raw-material supply and how to sell the output. We saw this in purified terephthalic acid.

As for the real-estate bubble, James Kygne of the Financial Times – quoting Logan Wright, a Hong Kong-based director at the Rhodium Group – wrote that there were sufficient empty properties in China to house over 90m people.

There were five G7 countries – France, Germany, Italy, the UK and Canada – that could each fit their entire populations into the empty Chinese apartments with room to spare, he added.

This amounts to enough homes for more than 30m Chinese families as three people is the average size of a Chinese household.

This gargantuan oversupply is occurring as demand for real estate declines due to an ageing population. The number of new births registered in 2020 was just 10m, the lowest since the founding of the People’s Republic of China in 1949, wrote the Guardian.

China’s property developers appear to have ignored the demographic headwinds,

They had instead been driven by what Caixin magazine said were the “three carriages” – high turnover, high gross profit and high leverage. Developers used borrowed money to acquire land, collected presale cash before projects even started and then borrowed more to invest in further projects, according to the article.

Why global MDI and TDI demand could have been 8.6m tonnes lower

In keeping with “What if?”, let’s imagine that Beijing had taken an entirely different set of policy decisions in 2008, the same as what is happening today through President Xi Jinping’s pivot to “common prosperity”.

From 2009 onwards, income and wealth inequality would have been reduced. China would have raised the tax base to pay for what was even then a rapidly greying population.

Greater state revenues would have come from higher income taxes, more stringent regulations to make people pay their taxes and new property taxes – measures which are now being planned.

BANG, look at the chart on the left in the slide below – what the world of methylene diphenyl diisocyanate (MDI) and toluene diisocyanate (TDI) would have looked like without the 2009-2020 real estate frenzy. These are two of the raw materials needed to make polyurethanes (PU). 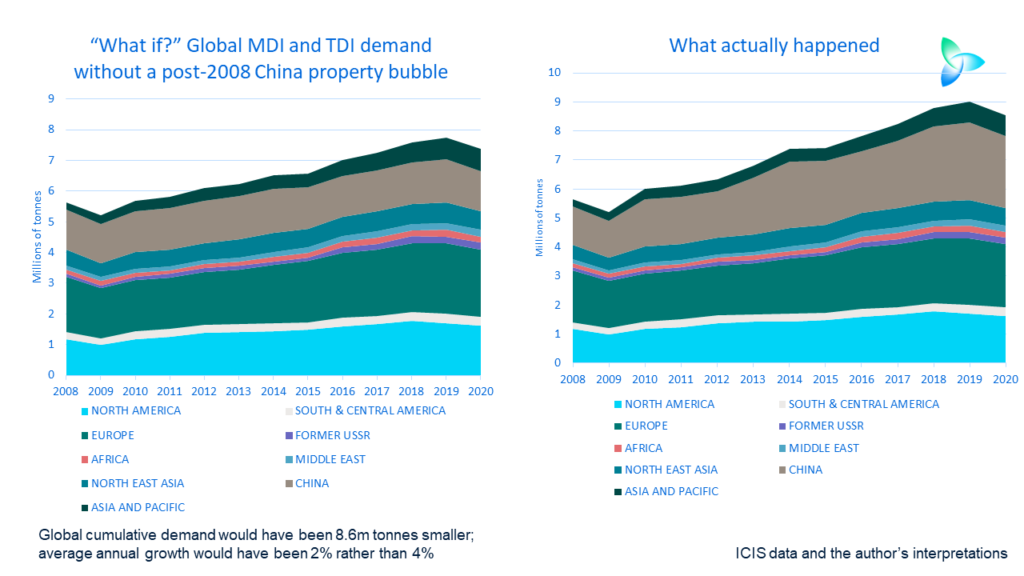 Growth would have still been solid, averaging 2% during most years, along with a few years of negative growth because of normal economic cycles.

In the chart on the left, I have kept demand in the other regions unchanged from what actually took place.  This would have left Europe as the world’s biggest market.

Cumulative global demand in 2008-2020 would have been 8.6m tonnes lower than was actually the case. Global demand would have risen by an average of 2% per year versus what really happened – a 4% increase.

The chart on the right shows the real course of events with, as I said, China’s global percentage share rising to an average of 30%. This pushed Europe into second place.

You might point out that global PU end-use demand is much more diverse than just rigid MDI-based foams for insulation and flexible TDI-base foams that go into sofas and mattresses etc. (see the chart below). 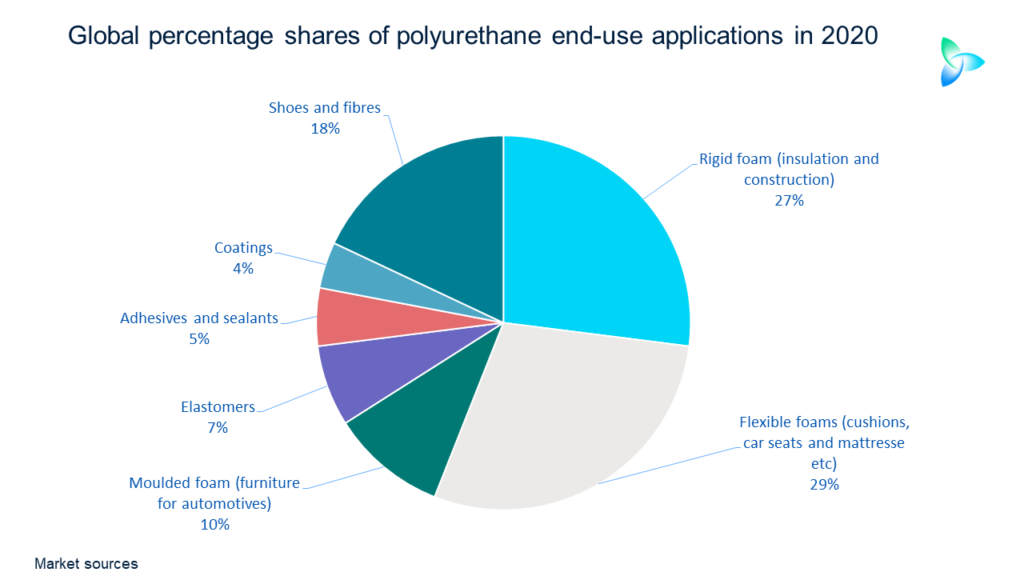 And it was not just people buying new homes in China who needed to insulate their houses and buy new sofas and mattresses.

But rising property wealth would have greatly supported sales of autos and luxury shoes, which are among the other end-use markets for PU.

How else does one fully explain the remarkable jump in China’s percentage share of global demand in 2009-2020 other than the property bubble, given that the headwinds of an ageing population grew stronger during this period?

Global financial markets rallied following Evergrande’s pledge to meet $83.5m of interest payments on an overseas bond, which were due yesterday.

But Evergrande still has more than $300bn in obligations to creditors and 778 projects under way in 223 cities, with great uncertainty surrounding how the government would rescue Evergrande if it were to default on its debts.

I have been told by wise China hands that a rescue would involve big investors being left on the hook. The company would be converted into a state-owned enterprise with Evergrande’s land and property sold at discounts to small investors.

This would be entirely in keeping with Xi’s heavier emphasis on “common prosperity” at the expense of “get rich quick”.

But whatever happens with Evergrande, Beijing appears to have set a course for the long term – a greater focus on income equality and tax collection that could and maybe should have happened back in late 2008.

This means we need to redraw long-term forecasts for China’s petrochemicals demand growth. New forecasts must centre on three headline scenarios with lots of grey areas in between:

Or you can just assume “back to the future” and not bother with Scenarios 2 and 3. But I see this an unacceptable risk for your employees and shareholders.