The eurozone debt crisis is no nearer solution 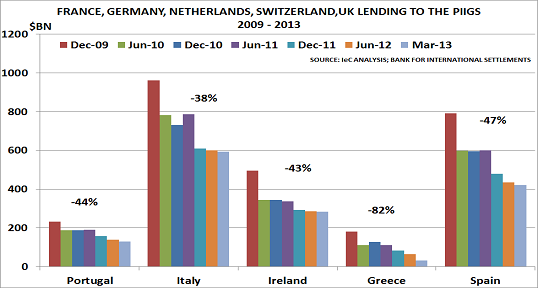 The Eurozone crisis has been quiet since the summer of 2012, as the markets waited for the German election.  But now this has occurred, it is unlikely that the problem can continue to be ignored.

It is easy to forget the drama of May 2012, when the blog correctly forecast a crisis was about to occur in the PIIGS countries (Portugal, Italy, Ireland, Greece, Spain).  Its view went mainstream in June, when major debt write-offs then took place in Greece, Ireland and Portugal.  Total meltdown was only avoided when the European Central Bank (ECB) promised to ‘do whatever it takes’ to save the euro.

Luckily for the ECB, the meaning of this empty promise has not yet been truly tested by the markets.  Instead, the issue has been ‘on hold’ as investors preferred instead to believe that the new German government would quickly provide the necessary financial support, once the “detail” of September’s election was out of the way.

But the blog stopped believing in fairy tales a long time ago.  So it is time to again review the loan position with the PIIGS, using latest data from the Bank for International Settlements (BIS), the central bankers’ bank.  This shows:

Now the election is over, the fairy tale will probably end.  And as the former BIS economic adviser, William White, warned a year ago, “risks are surely building up“.

Of course, investors were happy to take the free money from the central banks and speculate with it in oil and other markets.  But this did not solve the core Eurozone problem, which is that it needs full economic and political union if it is to survive.  A common currency simply cannot work without these, as German Chancellor Kohl and French President Mitterand agreed in 1990 when agreeing to launch the euro.

Equally it is naïve in the extreme to believe that German taxpayers will happily pay the bills for Southern Europe.  The German word for debt is, after all, Schuld – which also means guilt.  And in Germany the Eurozone debate is a morality play, where those in debt are ‘sinners’.

PREVIOUS POST "We really see retirement as the next big financial crisis"
NEXT POST Recovery has been delayed, again