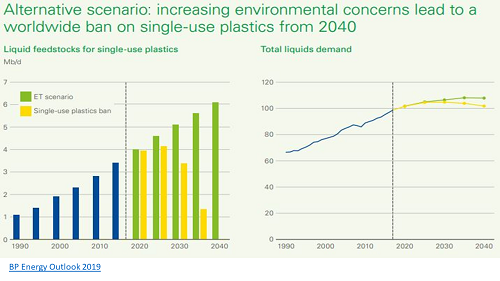 THE DEMAND growth for oil and other liquid fuels could be more than 50% lower up until 2040 under one scenario presented by BP in its latest Energy Review. This outcome would be the result of substantial growth in polymers recycling over the next 20 years.

This is based on on what I believe is the mistaken belief that growth in virgin polymers demand will replace lost oil consumption resulting from greater fuel efficiency and the rise of electric vehicles. The BP scenario supports my thinking that there will be a major shift towards mechanical and chemicals recycling of waste polymers.

Standalone petrochemicals companies that are on top of the single-use plastics crisis won’t care where their feedstock comes from. If the most economic feedstock is waste plastic then so be it. New environmental taxes seem likely to radically change feedstock economics.

But for oil giants such as Saudi Aramco, a major investor in new petrochemicals capacity, the potential outcome is quite scary. Oil may have to be left in the ground as there will be insufficient demand for crude in transportation fuels and in petrochemicals. Countries such as Saudi Arabia must push harder to break their dependence on hydrocarbons for economic growth.

You might believe that public and legislative concern over single-use plastics is just a passing fad, and that, anyway, the fad is predominantly in the developed world when it is in the developing world where polymers demand growth is the greatest.

Think again. The environmental strain on the developing world resulting from plastic rubbish is unsustainable.

This explains why China is no longer prepared to be the dumping ground for plastic waste exported from the West. It also explains why Indonesia, Malaysia and Vietnam have introduced their own legislation to restrict imports of plastic waste from the US and Europe that were formerly shipped to China.

And in India and rest of the  developing world there is a major legislative push against the consumption of single-use virgin plastics that is being driven by an environment toxified by plastic waste. In the living memory of hundreds of millions of people are the early 1970s when oceans and river banks were not clogged with discarded plastic. This was before the extraordinary rise in demand for single-use plastics.

Plastic pollution has become so appalling, so unacceptable, that the firm link between rising income levels and growing per capita consumption of virgin polymers in the developing world has in all likelihood been broken. 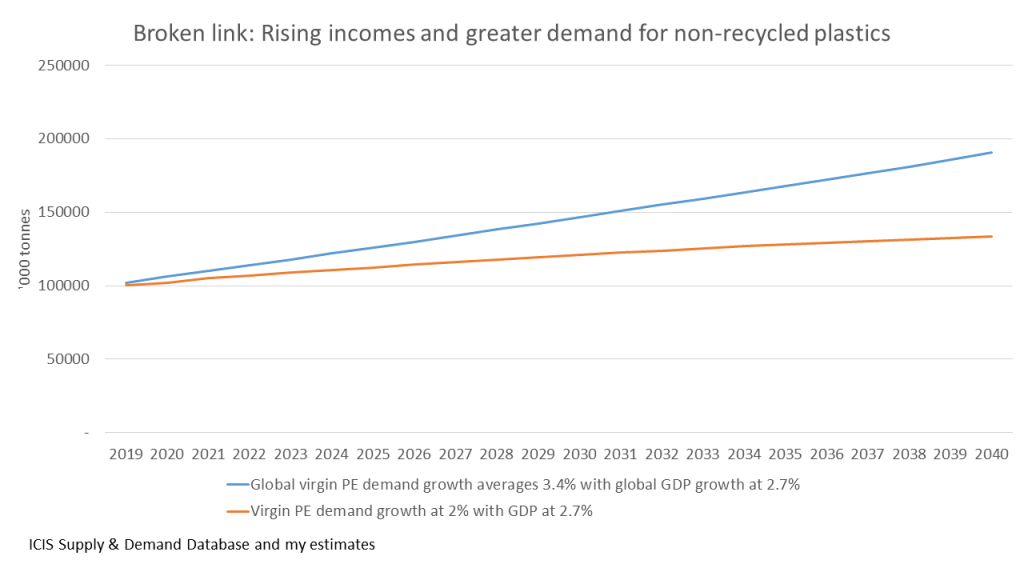 The polymer most affected by the plastics rubbish crisis is PE as more than 50% of its end-use applications are single-use plastics. PE is the heart of most stream cracker complexes.

Between 2000 and 2018 annual average global demand growth for virgin PE resins was 4%, according to the ICIS Supply & Demand Database. This compares with an average 3.7% rise in global GDP. In other words, virgin PE growth was three percentage points higher than the rise in global GDP.

Our base case sees this differential strengthening. We see annual average global consumption for virgin PE increasing by 3.4% versus a 2.7% rise in worldwide GDP between 2019 and 2040 – a seven percentage point advantage. This would leave global demand at 190.6m tonnes in 2040.

But what if this is reversed? What if the rise of virgin consumption was seven percentage points less than GDP? This to me seems a perfectly reasonable alternative scenario. The end-result would be 575m tonnes lower virgin PE demand than in our base case during all of the years from 2019 until 2040.