Home Blogs Asian Chemical Connections After COVID-19: How US petrochemicals could become the laggard

The big oil, gas and petrochemicals companies have already started planning for how the world will look after we have conquered the virus. What follows is therefore one scenario for how the petrochemicals world might look. I hope it helps to stimulate and challenge  your thinking. These are my personal views only and not the views of ICIS 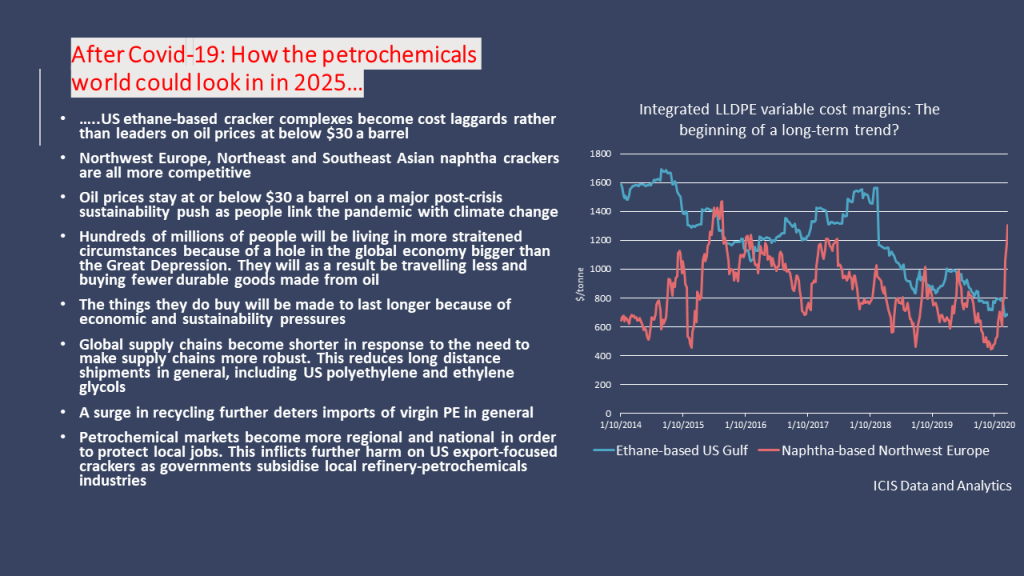 IT IS 2025. US petrochemicals producers are struggling because of decisions taken during the previous decade to build big heavily export-focused ethane-based steam cracker-to-polyethylene-and-ethylene glycols complexes. “But hey,” most people say, “nobody could have seen this coming”.

But it was clear from well before the US investments were even considered that the price of oil would be where it is today – at around $30 a barrel. The decline in crude demand as populations aged and as sustainability pressures increased told us this was the direction.

One of the reasons why the US industry is in deep trouble is that the collapse in oil prices has badly eroded the competitiveness of their ethane-based crackers versus naphtha-based competitors. There are other reasons which I detail below.

The COVID-19 tragedy has accentuated trends in oil market that were already taking place whilst adding new factors of its own.

The hole in global economic growth bigger than the Great Depression has left hundreds of millions of people in straitened circumstances.

The global middle classes are spending much less on all the things made from oil such as fuels for discretionary transportation and non-essential durable goods. In the developing world, the escape from poverty has been slowed down. This is the escape into income levels high enough for people to buy modern-day consumer goods for the first time.

The pandemic has increased the pace of decarbonisation as the outbreak has been linked with climate change. People are overwhelmingly of the view that we had been playing around with nature in ways we could not control. A major wave of new environmental legislation is in place as we push towards a green global economy.

A shortage of money and sustainability concerns mean durable goods, such as washing machines and TVs, are being built to last much longer.

Second-hand clothing and second-hand smartphone markets have rocketed, creating lots of new jobs. New employment is also being created in the green economy, adding to the popularity of sustainability.

Crude Markets are more physical and less financial because the debt crisis following the pandemic has led to major and much needed financial sector reform. Oil can no longer be used as store of value by hedge and pension funds etc. as they chase yield.

This has created much reduced volatility in oil prices and fewer crude-price spikes that are not connected to the fundamentals of supply and demand.

People recognise something else they had missed before the pandemic: Production costs for the vast majority of crude – 85% according to a now famous April 2020 IEA report – are at around $15 a barrel.

Countries such as Saudi Arabia and Russia still producing at high levels despite the weaker demand because they have low production costs and because oil revenues are vital for their economies. But the US shale-oil patch has been devastated due to its higher production costs.

COVID-19 threw into stark relief the need for more robust supply chains. This has in many cases led to shorter supply chains and a reluctance to buy anything that must travel long distances – including US PE and EG exported to China and the rest of Asia.

The collapse of oil prices has reinvigorated the naphtha cracker business, giving European and Asian producers much more flexibility to defend their home markets against US PE and EG imports.

European and Asian cracker operators have become state champions, supported by more national and regional-focused governments. The pandemic has emphasised the need to protect local jobs for local people, with refining and petrochemicals recognised as vital building blocks for local manufacturing.

The rise of sustainability has led to increased recycling of single-use plastics. This is further reducing the incentive to import virgin PE from anywhere.

The Middle East PE and EG industries, like those in the US, are ethane-based and so they too have seen their competitiveness deteriorate because of the collapse of oil prices. They are also being hurt by the rise of PE recycling.

But China and the rest of the developing world still needs big volumes of virgin PE imports as recycled markets are still in their infancy. China’s virgin PE  imports mainly come from the Middle East due to strong inter-governmental links. Middle East PE and EG are being also supplied as packages with oil.

Strong support from governments in the Middle East is helping the region’s producers deal with a vastly different economic, social and political era. This is not as much the case the US as the popularity of “small government” has left US producers largely on their own.

People make history, people make markets. Many individual decisions may as a result lead to very different outcome to the one I’ve described above.

But what is surely in no doubt is that the virus will change the world irrevocably. Our business will return to the way it was before March this year.