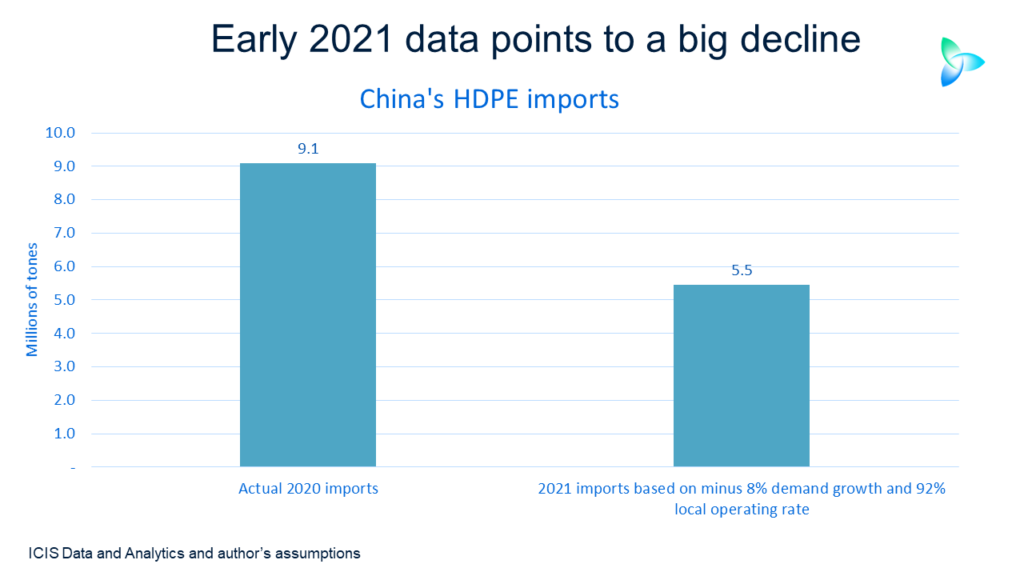 China’s high-density polyethylene (HDPE) imports in 2021 look as if they might collapse versus last year, according to the early data for this year (see the above chart).

The same could apply to polypropylene (PP) and styrene monomer (SM) imports, as I discussed earlier this week.

The potential 40% decline in HDPE imports to 5.5m tonnes in 2021 from last year’s 9.1m is based on net import and local production numbers for January-February this year, as was the case for PP and SM.

Any year-on-year data comparisons will only be of use from May 2021 onwards, as it was after this month in 2020 that China’s economy rapidly recovered.

HDPE net imports (imports minus exports) fell by 22% in January-February 2021 over November-December 2020 to 1.1m tonnes from 1.5m tonnes when you consider the exact numbers. Imports were also down by 22%.

Add net imports to local production and you get apparent demand in January-February of 2.7m tonnes, down by 8% compared with November-December’s apparent demand of 3m tonnes – again when you look at the exact numbers.

Assume this demand trend continues for the rest of this year and the result is total 2021 consumption of 16.4m tonnes – also 8% lower than demand in 2020 of 17.9m tonnes.

Such an outcome would involve growth falling off the shelf as 2020’s consumption represented a 12% increase over 2019.

I assume a 92% operating rate for local capacity in 2021 – the same as our estimate for last year imports.

This leads to, as I said, 2021 HDPE imports falling to just 5.5m tonnes from 9.1m tonnes in 2020. I see this as a very possible outcome for the reasons outlined below.

China has always run its capacity hard even in industry downturns

From the position of standard cost-per-tonne analysis, China’s HDPE industry is in a vastly different place in 2021 compared with 20 years ago in 2001.

Most of China’s new plants are in state-of-the-art petrochemicals industry parks with good integration upstream into modern steam crackers and refineries.  Ten years ago, most capacity growth was in less economic coal-based HDPE plants.

Very tight global supply of HDPE – which is expected to last until H2 this year – could result in China’s 2021 operating rate being higher than 92%.

Higher rates would guard against the risk of local downstream manufacturing running out of raw materials in today’s very tight market.

The case for major deleveraging

Long-term debt concerns were put aside in 2020 because of the risk to employment created by the pandemic. Last year, China boosted stimulus by around $500bn, wrote the Wall Street Journal.

But the newspaper said deleveraging had led to fall in commodity demand and pricing over the last few years.

Borrowing by state-owned enterprises (SOEs) in Q1 2021 hit the lowest level recorded by China Beige Book during the ten years it has been surveying the Chinese economy. China Beige Book is an independent China data and analytics firm.

Given ties to the state, government-linked companies are the “best signal” on authorities’ policy intent, China Beige Book added.

Although China Beige said that more quarterly data was needed to tell whether China was in full deleveraging mode, it added there were other signs authorities were trying to control debt.

At some point, China must deal with the following:

Income inequality in 2020 widened because most of the stimulus money went to the big SOEs and into a further inflation of a housing bubble that has always mainly benefited the wealth.

A further motive behind deleveraging could thus be not making income inequality any worse.

China Beige Book does, however, believe that consumer spending registered strong growth in Q1, although it cautioned that year-on-year comparisons were being distorted by the pandemic.

The big drop in HDPE net imports and imports in January-February 2021 versus November-December 2020 may tell us something useful about the strength of overall economic activity.

I argued earlier this week that the slowdown in PP and SM imports was likely the result of decelerating growth in China’s exports of manufactured goods, resulting from the global container-freight and semiconductor shortages.

It is important to note that a January-February slowdown in PE, PP and SM imports is unusual. In every year between 2009 and 2019, collective January-February imports increased versus November and December of the previous year.

A slowdown in China’s finished-goods exports in 2021 would, however, be less significant for HDPE than for PP and SM. Market sources estimate 10-15% of imported HDPE is re-exported as finished goods. This compares with 20-30% for PP and 30-40% for SM.

HDPE is not being as affected by the semiconductor shortage as PP and SM because of the different nature of the polymers’ end-uses.

Still, though, HDPE consumption in 2021 would be affected by a slowdown in exports. Between 10-15% of imports that are re-exported is still a significant quantity –909,740 tonnes-1.4m tonnes of last year’s total imports.

As an important aside, one explanation for the January-February declines in China’s HDPE, PP and SM imports could be much better netback elsewhere, as the slide below illustrates. 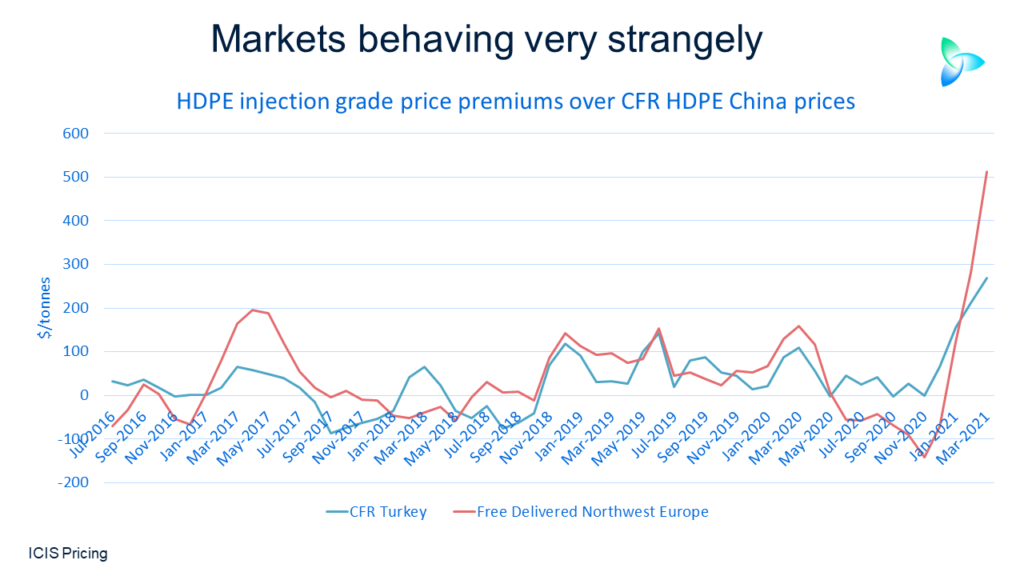 This appears to have led to some cargoes which would have gone to China being diverted elsewhere.

But here is the thing: if Chinese demand was that the strong and/or Chinese supply wasn’t long because of increased local capacity, surely, the gap between netbacks wouldn’t be as big as this?

China’s self-sufficiency and the impact on trade flows 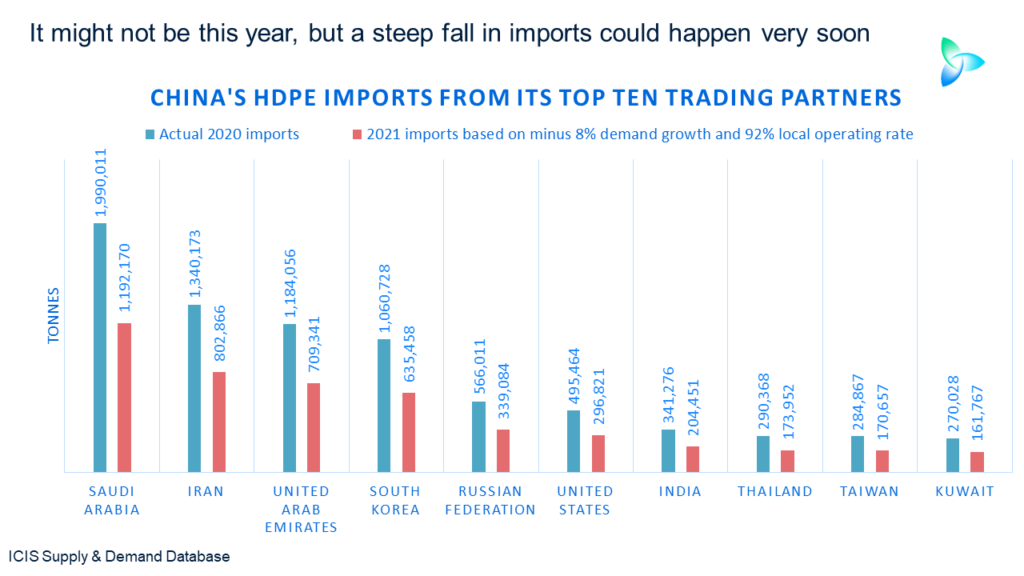 This might be way too pessimistic of course. All the negatives listed above would have to assemble in a neat line to result in 2021 HDPE demand growth falling to minus 8%.  But I see no reason why local operating rates will not be at least 92% in 2021.

And I see no reason why China will not continue to push hard towards greater self-sufficiency in HDPE and other petrochemicals. So eventually a collapse in HDPE imports seems on the cards, even if it doesn’t happen this year.

The above chart follows the usual approach of assuming that China’s top ten trading partners win the same percentage shares of total Chinese imports in 2021 as they did last year.

Just look at the impact on the top ten trading partners if this year’s imports were to fall to 5.5m tonnes.

PREVIOUS POST China early data point to PP imports collapsing by 78% this year with SM 67% lower
NEXT POST Iran may gain 48% of total China HDPE imports, 85% of LDPE imports by 2025 because of new deal