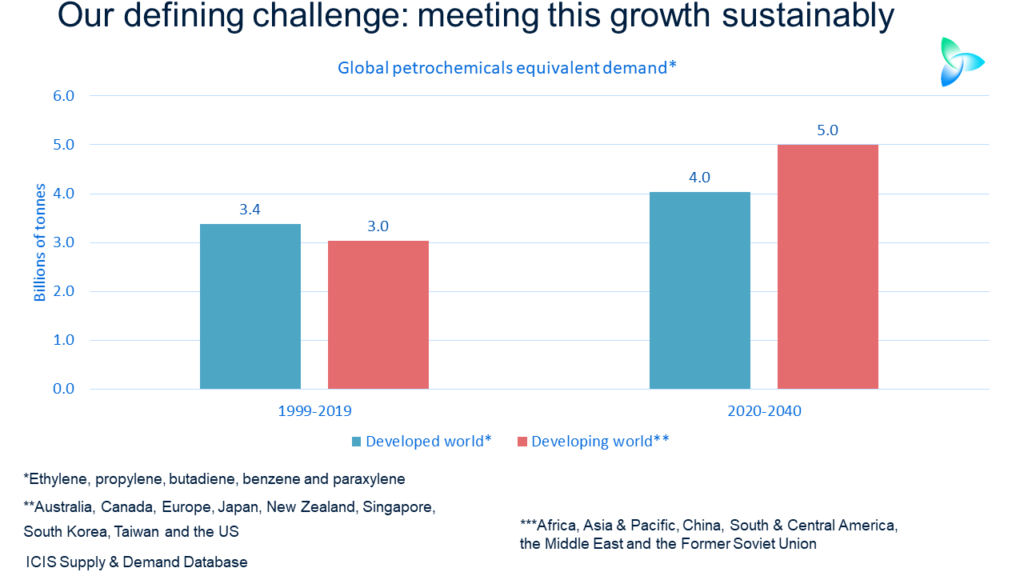 YOU ARE a global petrochemicals producer either headquartered in Europe or with major operations in Europe.

Stepping up your recycling game must be part of your strategy because of ever-intensifying EU legislation, including the introduction of an €800/tonne charge on plastic waste from January this year. The charge is paid by each member state.

Stronger legislation to control carbon emissions, including perhaps an EU carbon border adjustment tax, means carbon abatement must also be part of your plans from the C-suite downwards.

Or you might have your base in the US with a very focused gaze on what progress the Biden administration will make on its green agenda. The change in government has created the potential for a US version of the EU’s New Green Deal, including a heavy focus on reducing carbon emissions.

Investment community leaders such as Larry Fink, CEO of BlackRock, are suggesting that funding of conventional hydrocarbon projects will be much more limited in the future.

You are also facing pressure from shareholders to walk the talk on greening your business. Obtaining the funding for future growth may hinge on how you respond to these pressures.

For the European and US petrochemicals producers who are also oil and gas producers, the pressures are even greater. Not only do they face the carbon issue, but they must also confront the possibility that we have gone beyond Peak Oil Demand. In my opinion, we have reached Peak Oil Demand.

The rise of electric vehicles, hybrids – and perhaps one day major networks of hydrogen-powered vehicles – are forcing major revamps of energy and refining business models.

A further problem is the collapse of transportation fuels demand resulting from the pandemic. It could be many years before we return to our pre-coronavirus travelling patterns, if there is any return at all. By then, electric vehicles, etc, could be much more established.

How will the Western energy companies obtain sufficient petrochemicals feedstocks for future growth as refineries in the West are shut down? The same challenge obviously applies to the standalone petrochemical companies that buy-in their hydrocarbon feedstock.

“Tomorrow’s feedstocks will come from chemicals and mechanical recycling and bio routes,” is the easy, snap answer. But the technical, logistical and economic challenges of alternative sources of feedstocks are significant.

The jury is also perhaps out on whether alternative production routes will be beneficial or harmful in the battle to reduce CO2 emissions on a life-cycle basis.

Oil, gas, refining and petrochemicals companies have traditionally been forced to run harder to stand still to maintain market share and economies of scale because the consumption of all the things made from hydrocarbons has constantly increased.

As the above chart illustrates, using global petrochemicals equivalent demand as an (all the downstream products made from ethylene, propylene, butadiene, benzene and paraxylene), the pattern looks set to continue in the years to 2040.

But we forecast that in 2020-2040, developed world demand will be 4bn tonnes versus 5bn in the developing world.

Assuming the high hurdles for scaling up supply of feedstocks from mechanical and chemicals recycling are not cleared, might environmental pressures result in Western companies losing out on this fantastic growth opportunity?

If “less is more” becomes their approach, how will the Westerners achieve rates of return sufficient to satisfy investors?

Meanwhile, there is a scenario where some developing-world petrochemical companies may have more opportunities to expand to take advantage of the huge growth opportunities in their region.

It is possible that some companies headquartered in the developing world could be under less legislative pressure from their governments and pressure from local public opinion. The priority might be economic growth sufficient to lift hundreds of millions more people out of poverty.

A country cannot reduce its poverty level if it doesn’t have enough basic raw materials to make all the things people need, from food packaging to medical devices and smartphones.

Maybe conventional petrochemicals processes will always be the only way of providing enough raw materials given the challenges confronting chemicals and mechanical recycling.

Another scenario is that most it not all companies in the developing world are compelled to follow the green agenda.

The pushback against plastic waste is a global phenomenon as more and more bans and restrictions on the use of single-use plastics are introduced in Asia, Africa and South & Central America.

China may lead the way in tackling the plastic-rubbish crisis. It has the resources to create of a state-of-the-art recycling industry that leads the way with breakthrough technologies.

But we still need to consider how to meet tomorrow’s demand for all the things made from petrochemicals. A decade from now we may look back on the recycling business and conclude that it was an experiment that didn’t work because of the impossibility of sufficiently scaling-up production.

How do we build enough chemicals recycling plants to meet future demand given that they may have to be “local for local”?  Small facilities next to landfill sites could be the right business model because it is not economically and environmentally sustainable to move big volumes of plastic waste over long distances.

Supplying enough raw materials to continue the progress towards eradicating extreme poverty is not the only issue in the developing world; so is providing enough petrochemical building blocks to make all the luxury gizmos demanded by the developing world’s rapidly growing number of middle-income earners.

If, say, an optimum-scale chemical recycling plant has a capacity of 50,000 tonnes/year, think of how many of the plants would need to be built in India and China to meet future demand.

If a chemical recycling plant produces 50,000 tonnes of naphtha year, you would need 99 of the plants to make enough naphtha to produce 1.5m tonnes/year of ethylene.

Perhaps chemicals recycling plants will be more carbon efficient when you consider all the carbon produced from the oil well to a greenfield cracker complex.

But how might the picture change if future cracker complexes are themselves local for local? New carbon tariffs and/or carbon credits could mean most petrochemicals have to be sold locally.

But what about mechanical recycling? Some of today’s processes downgrade polymers resulting in low- value finished products.

Perhaps, though, we will see a white-hot technology revolution, where, compelled by the global plastics waste agenda, hundreds of millions of dollars more investment is poured into further developing alternative sources of feedstock.

This is the scale of investment that is probably needed if chemicals and mechanical recycling are going to be able to replace existing production routes.

One can argue that if the petrochemicals industry doesn’t make these investments, the brand owners and retailers will as they directly face public pressure to tackle the plastic waste crisis.

But the petrochemicals data in the above chart indicates huge future demand for laptops, washing machines and smartphones, along with all the single-use plastics that are the major focus of recycling efforts.

In this respect, the brand owners and retailers could be no different from the petrochemical companies. They may need to walk the talk on the environment whilst also equipping themselves with the production capacity to meet tomorrow’s demand.

What is also surely needed is to stop plastic rubbish from getting into the environment in the first place.

Some 2bn people in the developing world lack any access to rubbish collection systems, leaving them with few choices but to leave plastic waste in the open environment, I was told by an NGO three years ago.

Just ten rivers, all of which are in the developing world, are responsible for 90% of the plastic in the world’s oceans, according to the World Economic Forum.

Building modern-day plastic rubbish collection systems for these some 2bn people must be a priority. I believe this should also be the basis for plastic taxes imposed on polymer producers. The producers should be made to take responsibility, along with the brand owners and retailers, for the final sustainable disposal of plastic waste.

Incentive systems will also need to evolve to make sure more people dispose of plastic waste in the right ways.

If this means building lots more landfills, so be it. Landfills are far from ideal. But think of them as energy storage facilities for the day when, perhaps, chemicals and mechanicals recycling processes become the global silver bullet – the complete replacement for the conventional ways in which we make petrochemicals.

Mentioning landfills circles us back to the greenhouse gas issue, as landfills can produce a lot of methane. Solving the plastic waste crisis must go hand in hand with reducing methane, CO2 and other greenhouse gas emissions.  A very well-established approach to reduce methane emissions from landfills is building small land fill-based power stations.

A new study suggests that the Atlantic Gulf Stream, which limits winter storms and droughts in Europe, could become irrevocably unstable by the end of the century.

There are those of us who of course question conventional or mainstream climate science and say human activity is not behind changes in our climate.

Assuming, though, for argument’s sake, that conventional scientific opinion is correct, wouldn’t the petrochemicals industry be better to focus more heavily on reducing carbon emissions as opposed to plastics recycling?

Providing adequate rubbish collection and storage systems, however, feels to be like a no brainer. As I said, we cannot blame people who lack these systems for leaving plastic in the open environment.

Reducing emissions might be achieved without exposure to the risks that it may never be possible to scale-up chemicals and mechanical recycling technologies to meet demand. Big strides in reducing carbon output could be feasible at conventional refinery-petrochemicals complexes.

Think here of blue and green hydrogen, of electric furnaces to run steam crackers that are powered by renewable energy and the end of the “long distance” cracker projects.

Building crackers closer to the big end-use markets would reduce the carbon produced by shipping petrochemicals and polymers between countries and continents. As mentioned earlier, this approach could be necessitated by costs attached to carbon.

Or is it possible to tackle climate change and plastic recycling without one effort detracting from the other? Both challenges are huge opportunities for innovation and new revenue streams.

You may think I am being far too doubtful or downright sceptical. If so, that is great as I would love to hear why my views are unfounded.

The debate is the thing as we move forward as an industry to address the challenges of carbon and plastic waste whilst also ensuring enough petrochemicals supply to meet demand.