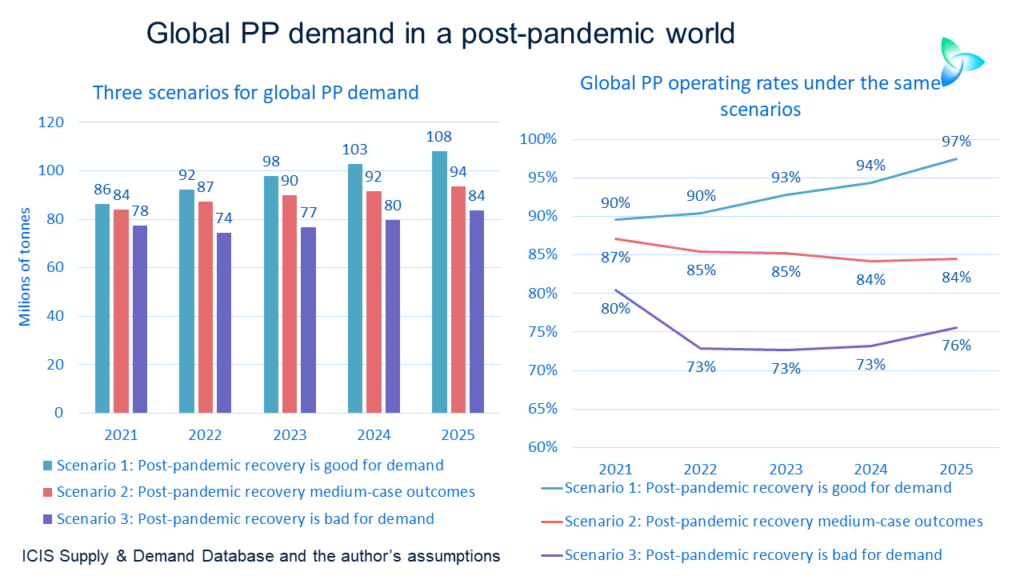 THE COMPLEXITY of the economic outlook is such that nobody can say with even the smallest degree of genuine confidence what will happen to global petrochemicals and polymers demand over the next five years.

It is hard to know where to start in suggesting scenarios of how the interconnections between today’s four megatrends – the pandemic, sustainability, geopolitics and demographics – could play out. But we must make a start. So, let us make a start with the pandemic.

There are three scenarios for what happens next in petrochemicals markets as the world recovers from the pandemic.

These scenarios hinge on the interplay between the cycle out of demand for some pandemic-related goods and back into “Old World” services such as travel.

We also need to evaluate the effect of high personal savings rates versus economic scarring left over from the pandemic. The effects of unprecedented levels of fiscal stimulus and ample monetary stimulus also need to be understood.

Using global polypropylene (PP) demand in 2021-2025 as an example, let us break this down into three scenarios – best case, medium case and worst case.

The three scenarios only focus on the demand outlook for the developed world plus China (72% of global PP consumption). All the scenarios assume everything goes well with vaccination programmes in the developing-world ex-China.

But there is of course yet another layer of complexity. It is possible that because of failed vaccination programmes in Africa etc, more vaccine-resistant strains of coronavirus could develop and spread to the rest of the world. We might then be back at square one.

As I said, though, we must start somewhere and then continually evolve our thinking. If we end up being blinded by all the complexity this will get us nowhere. So, see my thinking below based on the whole world bringing the pandemic fully under control during 2021.

What complicates the picture in the developed world and China is that petrochemicals consumption in 2020 was way better than expected because of our pandemic-related needs.

Packaging demand went through the roof as people ate more at home and less in restaurants, increasing surface area demand for polymers. Greatly increased hygiene needs further supported packaging end-use markets. Consumption of PP non-woven grades and polyester was boosted by the huge uptick in sales of face masks and hospital gowns, which are made from these two polymers.

The global surge in demand for single-use plastics from April last year onwards was followed by a boom in demand for the durable goods that we needed during lockdowns – laptops, computer monitors, office furniture, washing machines, tins of paints and rolls of wallpaper.

Stronger-than-expected packaging markets delivered evenly spread global benefits as, because of the nature of logistics, most packaging is “local-for-local”. You do not want to transport fresh air long distances so rolls of film, bottles and rigid food containers tend to be made locally from domestic or imported resins.

But the China export boon hugely supported the global petrochemicals industry – the “China in and China out” story. China’s imports of petrochemicals and polymers surged in 2020 which were then re-exported as finished goods. Last year’s PP imports were up by 26% over 2019.

In this important context, the unanswered question is whether petrochemicals demand will be better, neutral or worse in the post-coronavirus environment as compared to during the pandemic.

Here I assume PP demand will be better because as lockdowns end, people will spend their pent-up savings like crazy. Conspicuous consumption, or buying things for the sake of buying things, will take off as will “revenge travel” – catching as many flights as possible as revenge for all the months sat at home.

What has already happened in Australia may set the pattern for what happens across the rest of the developed world. Australia, my home country, brought the pandemic under control well ahead of many other countries and yet, as I said, we still have all this potential pent-up demand.

Australia’s retail sales have gone through the roof and the housing market is heating up thanks to the relaxation of lockdowns. Here in Western Australia where I live, life has been pretty much back to normal since last April, barring of course our inability to travel overseas.

The impact of our early success against the pandemic has led to four consecutive months of rising Australian auto sales, which were up by 5.1% year on year in February. Up until November 2020, Australia’s auto sales had declined for 31 months in a row.

Imagine the support that this would provide to global PP markets if auto sales take off in the rest of the developed world as lockdowns and travel restrictions end. And imagine the support to PP that would be provided by as, I said, lots of conspicuous consumption in general and revenge travel.

Further encouraging consumer largesse could be big developed-world fiscal spending programmes, including the giant $1.9tr US spending package that has been approved by the House. The bill should pass the Senate because of the Democrat majority in the upper chamber for finance bills. Last December, the EU approved a $2.2tr budget and stimulus package.

Central bankers, who remain sanguine about inflation risks – including most importantly the US Federal Reserve – have promised not to take away the punch bowl just as the party is really getting started. Provided inflation remains under control, the cost of borrowing looks to remain close to the historic lows we have seen over the last 15 years.

China under this scenario would be fine. Its domestic economy would continue to recover from the pandemic and return to prior levels of stellar growth.

Exports for the things we no longer need in such great quantities, such as face masks, would suffer. But the declines would be more than compensated for by strong growth in exports to serve booming Western conspicuous consumption.

This is therefore the basis for my upside for global 2021-2025 PP demand growth. I assume growth expands by an annual average of 6% during these years, including a very healthy 8% rise in 2021.  Cumulative global consumption in 2021-2025 would reach 487m tonnes.

Assuming there are no unannounced capacity additions, this outcome would also result in very healthy operating rates, averaging 93% in 2021-2025 and climbing to a high of 97% in 2025.

The porridge might end up being hot enough, but not too hot and not too cold either – a comfortable Goldilocks outcome.

There would be some decline in demand for the things that we no longer need in the post-pandemic world and a mild, but not extreme, uptick of conspicuous consumption.  Auto markets would, for instance, take off across the West, but sales growth would not be spectacular. Airports would be a lot busier but not packed to the rafters.

China would gain some modest growth in the exports of the things that we would need as sales of the goods that we no longer require declined. The local economy would return to reasonably healthy growth rates.

The end result would be average annual average demand growth of 3% in 2021-2015. This would include 5% growth this year falling to 2% by 2025 as the heady effects of all the pandemic stimulus wear off.

Operating rates during the five years would average 85%. Cumulative demand would reach 446m tonnes in 2021-2025, 41m tonnes lower than Scenario 1.

Larry Summers, the economist and former US Treasury official, is among the experts warning that unless US fiscal stimulus is properly designed it could end up being inflationary. In Australia again, output is back to within just 2% of where it was before the pandemic and yet large fiscal and monetary stimulus is set to continue.

So, bang, we end up back where we were during my childhood, the 1970s, when inflation was out of control. Bringing inflation under control required the kind of interest rates that are almost unimaginable today. US interest rates during the 1970s reached almost 20%.

This would, of course, hugely depress consumer spending on autos, housing and foreign travel. Savings rates would remain high as bank deposits came back into fashion. Stock markets, the source of so much wealth because of small retail investors gambling on markets during lockdowns, would decline.

Or the economic scarring from the pandemic could be so severe that fiscal and monetary stimulus remains a drop in the ocean. Indications of this scarring include US double-digit real unemployment and a persistently high job participation rate.

This scenario seems more likely if fiscal stimulus programmes are blocked by politics. For example, what might happen if Joe Biden cannot get his $1.9tr through the Senate largely intact?

China remains very dependent, probably too dependent, on exports for its growth. This scenario would see its export trade weaken considerably. And let us also assume that its domestic economy struggles as a result of rising bad debts and a rapidly ageing population.

This just scratches the surface, of course

As I said at the beginning, the complexities and ambiguities are legion. And as I have been emphasising since the pandemic began, GDP growth is no longer even a half-adequate guide to the direction of petrochemicals demand.

The complexities require a bottom-up approach to demand estimates from the supermarket shelves and car showrooms to the petrochemical plants. Bottom-up analysis also needs to be overlaid with constant analysis, at macro and micro levels, of the impact of the four megatrends – the pandemic, sustainability, geopolitics and demographics.

What you have just read therefore only scratches the surface. For help in detailed and comprehensive demand-scenario work, contact john.richardson@icis.com.