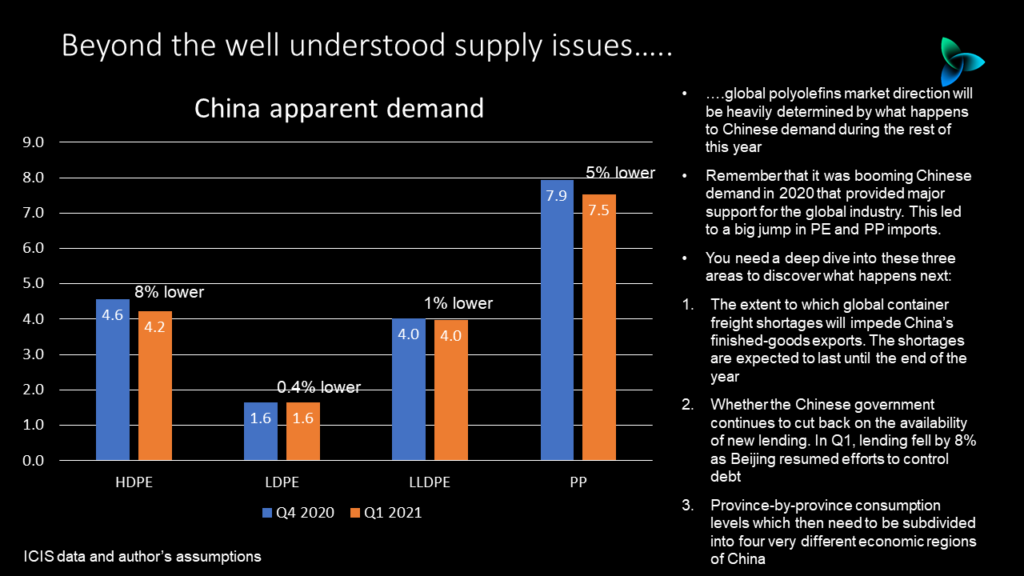 SOMEHOW, despite the still very serious container freight shortages that have limited imports, buying sentiment seems to have weakened in the European polyolefins market, according to my outstanding ICIS colleague, Linda Naylor.

Our excellent ICIS Pricing team in Asia are also sensing a shift in the mood in southeast Asia (SEA) as very tight supply eases. At one stage more than half of US linear low-density polyethylene (LLDPE) supply was offline because of the US winter storms.

But over the last week, supply has started to ease due to increased output from the Middle East. US supply is also gradually returning to normal.

And because of the terrible human tragedy in India, supplies that should gone to that country are being diverted to other markets.

For the first time in a long while, therefore, SEA buyers can sit, wait and hold onto stocks in anticipation of price weakening.

Have we thus reached a turning point in markets that will relieve some of the pressure on buyers?

Aside from the polyolefins supply issues, much will likely depend on what happens next with global container freight network that has become freakishly stressed by the pandemic.

Might the container freight shortages get worse if there is a boom in developed-world consumer spending when lockdowns ease? Or will consumer price inflation and/or the already lack of availability of goods prevent any such boom?

Sadly though, in any event, John Fossey, senior analyst of container equipment at Drewry Shipping Consultants, said in this Loadstar report that global container shipping shortages were unlikely to ease before the end of the year.

He said that the lack of containers was due to the carriers’ response to the pandemic. They first blanked voyages. This was followed by carriers deploying larger ships and extra loaders to cater for the unexpected demand, which led to congestion at ports.

Closely study global patterns PE and PP imports and how they are shifting in response to the container shortages. This well help you assess the extent to which the container freight issue continues to effect trade.

On the demand side of the equation, we already know that a slowdown in the Chinese economy has taken place.

It is crucial to remember that all Q1 2021 year-on-year data comparisons on China are highly misleading because China was in the midst of its pandemic during the first quarter of last year.

What instead counts is whether the strong momentum of growth in Q4 2020 was fully carried over into Q1 2021 – the point I’ve been making since January. Now we have the evidence that this wasn’t the case.

“Don’t worry, local demand in China was obviously booming, just look at the Q1 retail sales numbers. We have nothing to worry about from hereon,” you might say.

But Michael Pettis, the China-based finance professor, provided important context on the retail sales number when he wrote on Twitter: “Retail sales for Q1 – a proxy for consumption – were up a seemingly spectacular 33.9% year-on-year, but they were up an annualised 4.2% from the first quarter of 2019, which tells us that in the past two years, growth in retail sales has lagged growth in GDP by 2 percentage points.

“This is confirmed by the Q1 residential income data, which jumped 13.7% year-on-year and by an annualised 4.6% from the first quarter of 2019, which means it has lagged GDP by just over 1 percentage point.”

This points towards China’s domestic economy still being smaller than before the pandemic.

Are the slowdowns in quarter-on-quarter GDP and polyolefins growth also the result of Chinese exports of finished goods being impeded by both the global container freight and semiconductor shortages?

This is where analysis of not just PE and PP trade flows but also the flows of Chinese exports of finished goods will be crucial.

Because the Chinese local economy was smaller in 2020 than in 2019 (and, as I said, that still seems to be the case now), it was China’s extraordinary export boom that led to the country recording positive GDP growth of 2.3%. China was the only major economy to record positive growth in 2020.

This led to a surge in petrochemicals and polymers import to supply the raw materials exports for this boom. PP imports were up by 12% in 2020 over 2019 with PP imports 27% higher.

Also crucial to your understanding will be whether Beijing continues with its debt reduction drive. Q1 Total Social Financing – lending from the state-owned and private banks – was down by 8%.

If there are any signs of an economic slowdown then China might loosen the credit tap again. So, keep your eyes on these numbers.

The Chinese economy isn’t obviously the only economy you need to analyse. We live in an exceptionally uncertain global demand environment where we lack adequate tools to make firm assessments.

But because China dominates global polyolefins demand, a nuanced and deep study of economic events in China will take you a long away in predicting the direction of polyolefin markets in every region.

I recommend that this study should involve estimates of a province-by-province view of polyolefins consumption levels.

Supporting my argument is a new report from Nomura which found that the economic gap between northern and southern China has grown over the past decade.

The southern provinces had benefited from export dependence and the internet boom, while resource-rich northern regions had been dragged down by slower fixed investment, falling commodity prices and population migration, said the bank.

Nomura estimated that northern China’s share of the national economy shrank to 35.2% last year from 42.9% in 2012.

The bank added that the nature of the recovery from the pandemic had widened regional inequality.

This was one of the points made by Chinese government officials highlighted during March’s critical “two sessions” economic planning meetings. They announced plans to narrow the regional divide, which, if successful, would have significant implications for overall economic growth.

This big regional divide filters down into patterns of polyolefins consumption. Take Nomura’s comment about the internet boom in the southern provinces. This suggests that internet sales are much greater in the south than the north. Goods sold over the internet require a lot of PE and PP packaging. 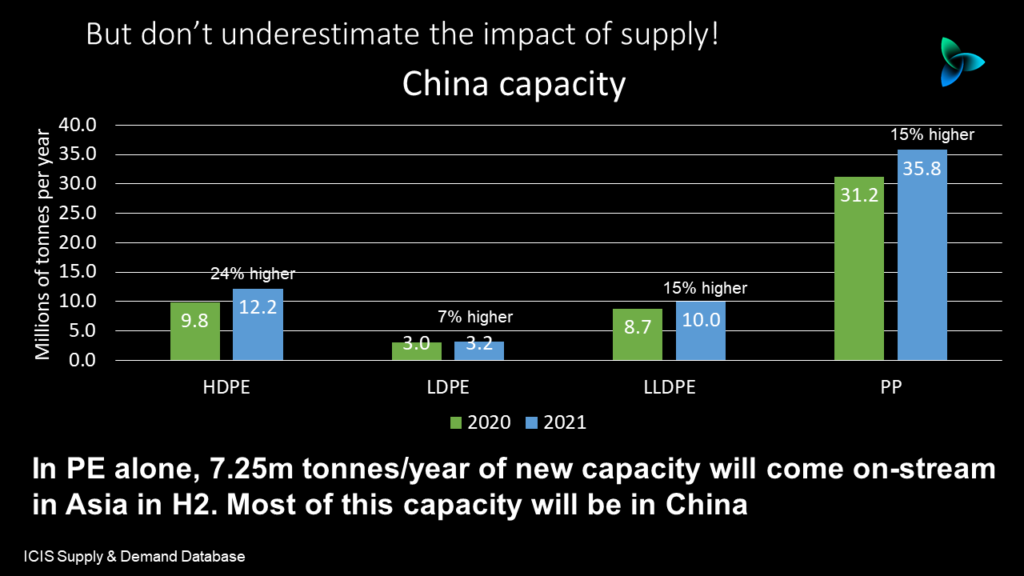 We might get lucky again. There is every chance that the Chinese economy remains fine despite all these challenges and contradictions. But I maintain that we should rely on more than just good luck. Deeper analysis of China is essential for better planning.

But the luck for some polyolefins exporters to China is definitively running out because of the country’s rising self-sufficiency. Please don’t say I didn’t tell. I first flagged this up as a major risk in 2014. This year:

The biggest risk is a big fall in PP imports. Imports could fall to around 4m tonnes this year from 6.6m tonnes in 2020. And by as soon as 2026, China may be in a net exporter position.

It might be that the sheer volume of new capacity hitting Asia in general during the remainder of this year is by itself enough to turn markets in a different direction. In PE alone, we estimate that 7.25m tonnes/year of new capacity will come on-stream in Asia in H2. Most of this capacity is in China.

I hope this helps as a guide for the rest of this year. If you need any more help, please do not hesitate to contact ICIS, via myself, at john.richardson@icis.com.

PREVIOUS POST Environmental crises: no "silver bullet" solution but petchems must get this right
NEXT POST Middle East and Asia petchems need reinvention because of rising China self-sufficiency