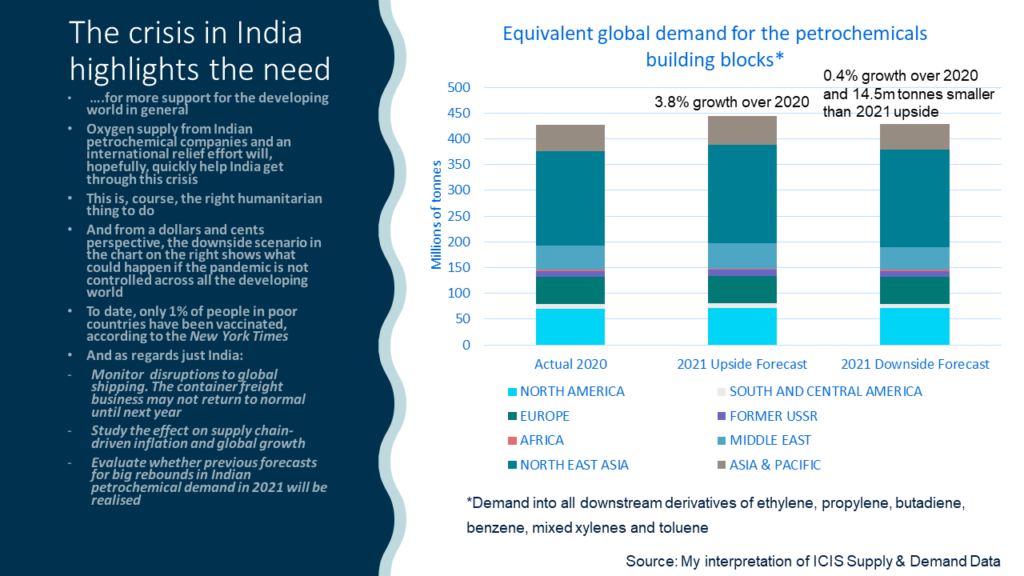 IT IS fabulous to read about how Indian Oil Corp and Reliance Industries are supplying oxygen from their petrochemicals operations to help relieve the Indian medical shortages. Local steel plants are also diverting oxygen supplies to hospitals as international relief efforts gather pace.

My thoughts and best wishes are with my Indian contacts and friends. Please stay safe.

I worry, though, that events in India could be a precursor to a wider developing-world problem, as I discussed in January.

Sure, domestic political reasons appear to have contributed to India’s terrible pandemic crisis -and the same might apply to other developing countries if the worst were to happen and the pandemic was to, say, run out of control in Africa.

But we live in an interconnected world. From a dollars and cents never mind the more important humanitarian perspective, it is in all our interests to step up and help the developing world get vaccinated and ensure that it has enough medical supplies.

Until the whole world is safe none of  us are safe because of the danger that mutations develop in unvaccinated populations and spread elsewhere.

Debt relief is also essential as many developing-world countries are in weak fiscal positions. They cannot afford to stimulate their economies anywhere close to the scale of the West.

Focusing just on India and petrochemicals demand, it now seems as if our base case forecasts for 2021 consumption growth might have to be revised down if India’s crisis isn’t resolved very quickly.

Labour shortages had last week led to sharply reduced operating rates at local “non-essential” plastic processors making durable goods, I was told by Indian contacts.  Essential processors making plastic packaging were said to be running just about normally, but this might change.

India’s pandemic crisis is affecting the global shipping industry. The industry was already under great stress before Indian ports started turning away cargoes.

A considerable percentage of the world’s shipping crews come from India, so there is a risk of the kind of global labour shortages that damaged shipping supply earlier this year. Labour supply for shipping had only recently returned to normal.

The scale of the potential knock-on effect on shipping was highlighted by the Financial Times when it wrote last week: “Ports including Singapore and Fujairah in the United Arab Emirates have barred ships from changing crew members who have recently travelled from India, notices from maritime authorities show. Zhoushan in China has banned the entry of ships or crew that have visited India or Bangladesh in the past three months, according to Wilhelmsen Ship Management, a crew provider.”

If the problems in India are not quickly resolved, this could add to the imbalances in the global container-freight business that I revisited earlier this week.

For the wider global economy, container freight disruptions are combining with other supply-chain shortages to push inflation higher.

There are shortages, caused by the global pandemic, of everything from containers to wooden pallets, metal drums, tin cans and semiconductors. If events continue as they are in India – and if the pandemic were to again run out of control other parts of the developing world – we could end up with levels of inflation that damage the global economy.

And remember, also, that the moderate economic slowdown we saw in China in Q1 2021 was partly the result of semiconductor and container-freight disruptions to Chinese exports. If the container-freight problems were to worsen because of problems in the developing world, China’s slowdown might continue.

Container-freight disruptions have also led to historically high European polyethylene and PP price premiums over other regions. Even though arbitrage to Europe is very strong, moving cargoes is very difficult. It remains to be seen whether events in India will add to the European problems.

Because we live in such an interconnected world, the implications for global petrochemicals could be big unless the solutions to the pandemic are truly global.

The developing world’s role in driving global demand for the building blocks has substantially increased over the last 20 years. In 2000, the Asia & Pacific region (which includes southeast Asia and the Indian subcontinent), Africa, the Middle East and South and Central America, accounted for 16% of global consumption. Last year, this had increased to 26%.

Just for demonstration purposes only as this doesn’t involve proper scenario work, let us consider two outcomes for 2021 demand for the building blocks based on different outcomes from the pandemic.

Let us start, though, with what happened in 2020 for the sake of valuable context. I am assuming 2% growth for North America over 2019, flat growth for Europe and 4% growth for northeast Asia (NEA), which comprises China, Japan, South Korea and Taiwan. Growth in the one remaining region, the Former Soviet Union (FSU), was 7%.

Growth was positive in the developed world because of unprecedented levels of government economic stimulus and the cycle out of some services into goods – e.g. greater demand for eating food from supermarkets as opposed to restaurants, increased hygiene needs and more demand for laptops and washing machines for converting homes into offices.

Meanwhile, though, much smaller government budgets, the collapse of remittance payments from overseas workers and domestic lockdowns that pushed hundreds of millions more people into extreme poverty led to negative growth across the developing world.

I am assuming Asia & Pacific growth was minus 3% in 2020 over last year, Africa was minus 8%, the Middle East minus 5% and South and Central America minus 7%.

Sadly, since January, we have moved closer to something like by downside scenario for 2021 being realised – a loss of 14.5m tonnes of demand.