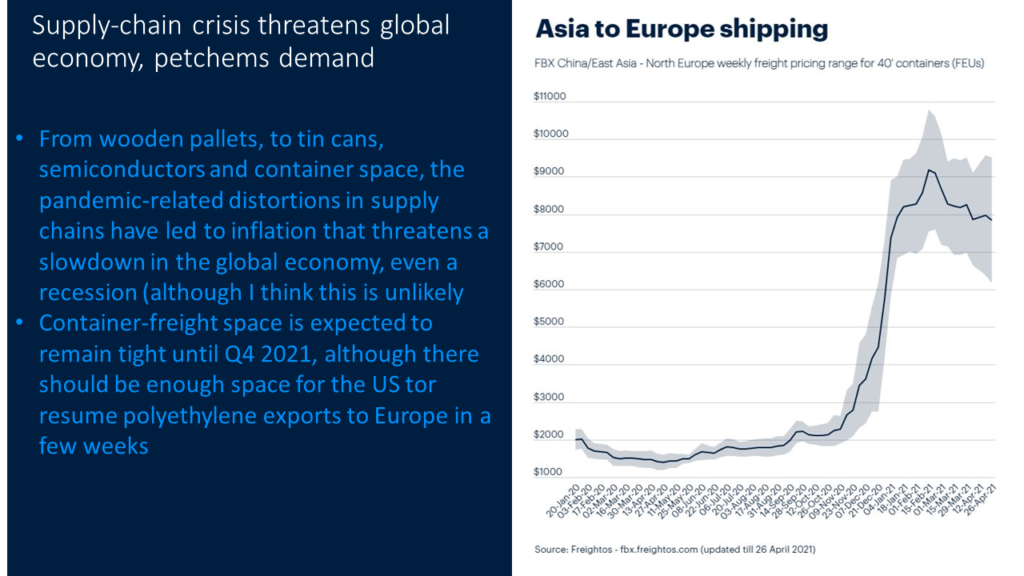 CONTAINER FREIGHT space will remain in short supply until Q4 this year, said the Maersk chief executive, confirming earlier analysis by Drewry Consulting. Global supply chains are also stressed by shortages of everything from semiconductors to wooden pallets, metal drums and tin cans.

Who would have thought that the humble tin can would be causing such a problem for the petrochemicals industry and its customers? But it is. “I have a customer producing window foam – foam in cans. He needed a million cans and he only got 50,000. There’s also a lack of cardboard,” said a European isocyanates producer.

Enough containers to move US PE to Europe, we believe

Petrochemicals themselves remain in short supply. This is partly because of reduced feedstock from refineries, a consequence of the pandemic-related collapse in transportation fuels demand.

Global petrochemical supply is still edging back to something like normal following the US winter storms in February, during which most US capacity was shut down.

A point of discussion is whether containers will become available in the right places at the right prices to relieve tightness in the European polyethylene (PE) market, once US supply has normalised. The container issue is making it difficult to move PE and polypropylene (PP) cargoes from Asia to Europe.

Market intelligence from the US-based ICIS CDI team indicates that enough container freight space will be available to resume significant shipments of US PE to Europe, albeit at high prices. It will be several more weeks before domestic pipelines have been refilled, enabling US producers to refocus on exports, added CDI.

The supply chain crisis has many short-term implications for our industry. This includes an export-based economic slowdown in China, which I have been warning about since January. It has now happened. The Wall Street Journal wrote last week:

“Official gauges across China’s economy fell short of expectations in April, hit in part by semiconductor shortages, suggesting that the economy’s strong pandemic bounce-back is starting to lose some momentum more than a year into the recovery.”

China’s remarkably rapid economic recovery in H2 last year was largely the result of booming exports of the things we needed for our pandemic-afflicted lifestyles, including consumer electronics. The semiconductor shortage is said to be affecting production of electronics in China.

The semiconductor and container freight shortages help explain why China’s apparent demand for styrene monomer fell by 2% in Q1 this year versus Q4 2020 (the only relevant measure, as all year-on-year comparisons are erroneous).

“I got a report from our logistics director. He said prices for one container from Shanghai to Rotterdam have increased from $2,000 to $8,000 in the past month,” a petrochemicals industry source said in April.

“All the ships are delayed. We’re not talking about two to three days, it’s more than a week,” he added.

If the world’s most important petrochemicals market continues to falter there will be implications in every region. In all the products listed above, China accounted for more than 30% of global demand in 2020 (no less than 63% in the case of EG!). This made China by far the biggest consumption region.

Increases in inflation and raw material and equipment shortages are affecting petrochemical end-users in several regions.

“The construction industry is currently experiencing an unprecedented mix of steeply rising materials prices, snarled supply chains and staffing difficulties, combined with slumping demand that is keeping many contractors from passing on their added costs,” the Associated General Contractors of America wrote in a March report.

The report talked about the possibility of companies going out of business and increasing unemployment levels. It also said, “Input costs for general contractors have soared nearly 13% from April 2020 to February 2021”.

US polyvinyl chloride (PVC) prices had increased by 18% from January up until the week ending 7 May, the result of PVC outages caused by the winter storms.

Some US auto industry suppliers have gone to extraordinary lengths to maintain their production, the WSJ again reported last week: “ ‘Some suppliers are flying in [polyurethane] resin to the US. from Europe,’ said Sheldon Klein, a lawyer at the firm Butzel Long who advises suppliers. ‘That’s just economically crushing,’ he said. ‘At best you have very sharp-elbow discussions with your customer about shouldering some of the cost.’ ”

Flying in polyurethane resins makes sense because of the very strong recovery in US auto sales.

The rebound In US sales us one of the petrochemicals end-use sectors that is recovering in the developed world (the developing world is another story). Many other end-use sectors have remained buoyant throughout the pandemic – and this is likely to continue.

Government stimulus will continue to support markets. The $2.3tr US infrastructure bill would, for example, have a hugely beneficial impact on petrochemicals markets if it is approved by Congress. US demand has already been buoyed by the $1.9tr stimulus bill passed in February, the easing of lockdowns and high personal savings levels.

No matter what progress the world makes in overcoming the pandemic, consumption of hygiene products will remain at elevated levels because of the precautionary principle.

Some $14bn of investment has poured into Western food delivery start-ups. Even when the developed world brings the pandemic fully under control, social habits may have undergone a permanent change for convenience and fashion reasons.

We saw this in China in 2015 when, during a brief and mild economic downturn, there was a collapse in demand for high-end restaurant food. Companies sprung up to deliver gourmet food to people’s homes at lower costs. Despite what has since been very strong economic growth, home delivery of restaurant food remains a popular option.

All these deliveries require packaging in PE, PP and polystyrene. So much for sustainability concerns, at least for the time being.

But there is a risk that inflation resulting from the supply chain issues could upset the economic apple cart. A “Roaring 20s” post-pandemic boom in the developed world may not materialise because of inflation. Or inflation might even increase to the point where demand weakens from its current levels. We may see an inflation-driven global recession.

Price differentials between different regions will indicate the return to normal 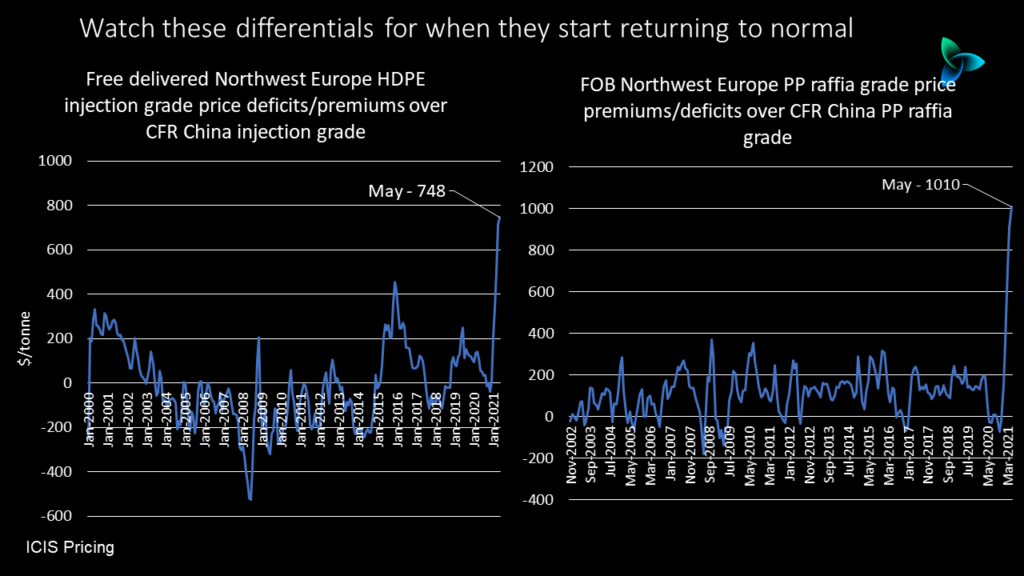 I will write a later post on the long-term implications of the pandemic-related supply chain crisis.

In short here, provided corporate memories remain long enough, we may see less of the “just-in-time” inventory management model. And to some extent, manufacturing supply chains could become more localised.

But the changes would need to be sold to shareholders who want constant quarter-on-quarter improvements in profits. Will they be prepared to be accept more cash being tied up in stocks and capital investments in local supply chains?

More immediately, for the purposes of this post, I find myself in a difficult position as I like to offer advice on what to do next. Beyond the blatantly obvious need for very deep and scenario-based supply chain intelligence, I am struggling to think of how I can help.

What is clear, for what it’s worth, is that as long as supply chain disruptions continue, petrochemicals markets will continue to behave in very unusual ways.

There is good chance that, for example, the big PE and PP price differentials between Europe and Asia – the subject of the above chart – will continue.

Until the supply chain problems ease, petrochemicals markets in general seem likely to be much more regional and less global.

You need downside demand scenarios where inflation either prevents a post-pandemic demand boom or even causes a global recession. I feel that a recession is unlikely given underlying weak inflationary pressures, minus the supply chain issues – and the scale of government stimulus.

Perhaps some of this stimulus is being used, or can be used, to fix the supply chain issues.

No one-size-fits-all scenario for Chinese consumption is going to work. There are so many moving parts that will determined what happens in China during the rest of this year beyond just the uncertainties surrounding supply chains. I have covered what I hope are most of these moving parts in previous posts.

Also, stay in touch with our pricing editors and read our price and news reports. We hold thousands of discussions with market participants every week across every region that can help you track whether markets are returning to the normal.

From a data perspective, a key measure of the eventual return to normality will be whether today’s extreme price differentials between Europe and other regions stay in place in not just PE and PP, but also in other products as well. This is where you need our price assessments and price forecasts.

PREVIOUS POST Petrochemical buyers, after a very difficult pandemic, can gain from China-driven deflation
NEXT POST India's pandemic crisis is a pointer towards wider developing-world risks