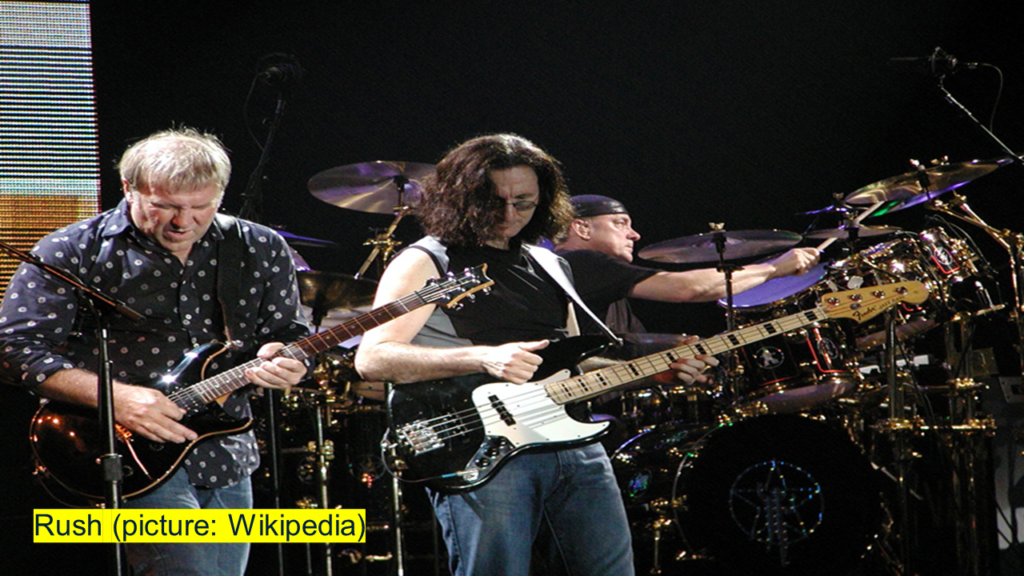 THE GREATEST rock band of all time put it so well in Circumstances from the seminal 1978 album, Hemispheres.

The apposite line in the Rush song in relation to this week’s petrochemicals markets is “plus ça change, plus c’est la même chose” (translated from French, “the more things change, the more they stay the same”).

The sharp falls in global equities and oil prices that we saw on Monday on concerns over a third wave of the pandemic in the developed world, and the worsening rate of infections in deaths in poorer countries, led to a sharp sell-off in petrochemical stocks.

“Petrochemical stocks plunged worldwide on 19 July ahead of the Q2 earnings season. The declines were consistent with those in economically sensitive sectors such as steel, copper, automotive and housing,” wrote my ICIS colleague, Joseph Chang, in this Insight article.

Learning nothing from recent history

This is a case of “the more that things change, the more they stay the same” because we were very recently in this same place.

We seem to have learned nothing from last April. There are still no reasons to assume that just because the broader global economy might be entering a new and very difficult phase, the same will apply to petrochemicals.

All the gloom and doom of last April was wrong because of the boom in demand for personal protective equipment and more recently syringes and all the other medical supplies necessary for vaccination programmes. Demand in these end-use markets is going to remain very strong for a very long time.

Let us assume that lockdowns were re-imposed in the developed world. This would mean more job furlough and other income support schemes.

Interest rates remain at record lows, making further government borrowing in the developed world very cheap. And anyway, governments would have no choice but to spend a lot more money to support vulnerable workers.

Further government spending would of course support consumer spending, as it did in 2020 and in H1 2021.

The big unknown is whether we have reached peak demand for the durable goods that rich-world countries bought in abundance during 2020 and the first half of this year.

These goods included new computers, game consoles, washing machines, office furniture, tins of paint and rolls of wallpaper which are, of course, by their nature occasional purchases.

A guaranteed win from a long-term change in spending habits

But if lockdowns were to resume, the cash-rich middle classes that hadn’t already spent money on new computers etc. would have the inclinations and abilities to do so.

As restaurants have re-opened in the richer countries, demand in end-use food packaging may decline because of the “surface area” effect.

When you eat in a restaurant your food is delivered to kitchens packaged in large containers or big sheets of plastic film that comprise less surface area, so therefore less volumes of polymers, than is the case with smaller packages sold in supermarkets.

The other dynamic we need to consider is the boom in internet sales and the benefits for petrochemicals demand.

Any product bought online is dropped an estimated 17 times before it is delivered because of long and highly complex logistics chains. This means internet sales companies do not skimp on plastic packaging despite the environmental pressures.

If lockdowns were to again resume on a big scale in the rich world, we would continue to buy a lot of stuff online for safety reasons and because many shops might have to be closed down.

Let’s flip the virological, political and social coin the other way and assume that concerns about a third wave of the pandemic in the developed world are exaggerated.

Perhaps the high rates of vaccine hesitancy don’t matter, along with a slowing vaccination programme in the US and the UK’s decision to lift all restrictions on 19 July despite a high number of new cases.

Would this mean we would be in line for a new “Roaring 20s” as economies continued to open-up and the rich world’s middle classes spent big dollops of money on holidays, new cars and in restaurants?

In my view no because as the Financial Times wrote in this article, quoting research from Barron’s: “Excess savings have been released in spending sprees only in nations that were defeated and destabilised in war, where consumers feared their currency might soon be rendered worthless”

The newspaper added that the last major episode of forced savings in the US came under rationing in the Second World War. America of course won but rather than spend wildly after the war, Americans held onto their extra money for years.

Assuming that the third wave is not that serious (I unfortunately think it is), the petrochemicals demand boom we saw last year and in H1 will be about as good as it gets.

I don’t see major upticks in demand if economies if the third wave was not a big deal. The reasons would be the cycle of demand for some goods and into services and, as I said, how high savings rates have historically been treated.

But I do see consumption being maintained more or less at last year’s high levels because of persistently strong hygiene demand and change in social habits.

People have got used to spending more online and I suspect that internet spending will remain elevated under any circumstances, supported by the some $14bn of financing that has flowed into start-ups of new internet food delivery companies in the developed world.

But in either of the outcomes described above, the wild card that could upset the demand apple cart are container freight and other supply chain shortages.

Regardless of the demand for washing machines, refrigerators and computers that are mainly made in China and shipped to the developed world, until or unless the world is fully vaccinated further disruptions to port operations are inevitable. We are a long, long way from the world being fully vaccinated.

We also have to worry about the impact of  supply chain shortages on global inflation.

Supply chain problems are very probably a major factor behind the slowdown in Chinese exports of manufactured goods. China’s exports in H1 this year were 20% lower than in H2 2020.

This was reflected in China’s polyethylene (PE), polypropylene (PP) and styrene monomer apparent demand in January-May 2021 compared with the last five months of 2020, the only valid comparison.

But this is far from being the end of the world. Even if the January-May trends were to continue for the rest of 2021, this year’s demand in China would still be a lot higher than in 2019 – a pre-pandemic year.

Petrochemicals demand in the developing world, including in southeast Asia (SEA), is also heading for a second consecutive year of negative growth because of the pandemic.

But as I keep stressing, from a hard-hearted dollars and cents perspective this is not a big deal because more than 70% of global consumption across all the petrochemicals comprises the developed world plus China. China is not a typical developing country and so it needs to be placed in a category by itself.

If crude prices were to continue to head south, however, we could see less forward buying of petrochemicals. Converters and brand owners might be able to reduce weekly or monthly purchases in anticipation of lower petrochemical prices. This would reduce apparent demand.

But, hey, come on, forecasting oil prices is all but impossible because of their links with highly automated and very speculative financial markets. For instance, after Monday’s price declines crude prices bounced back by 4% on Wednesday.

Was H1 2021, though, the peak for petrochemicals margins? 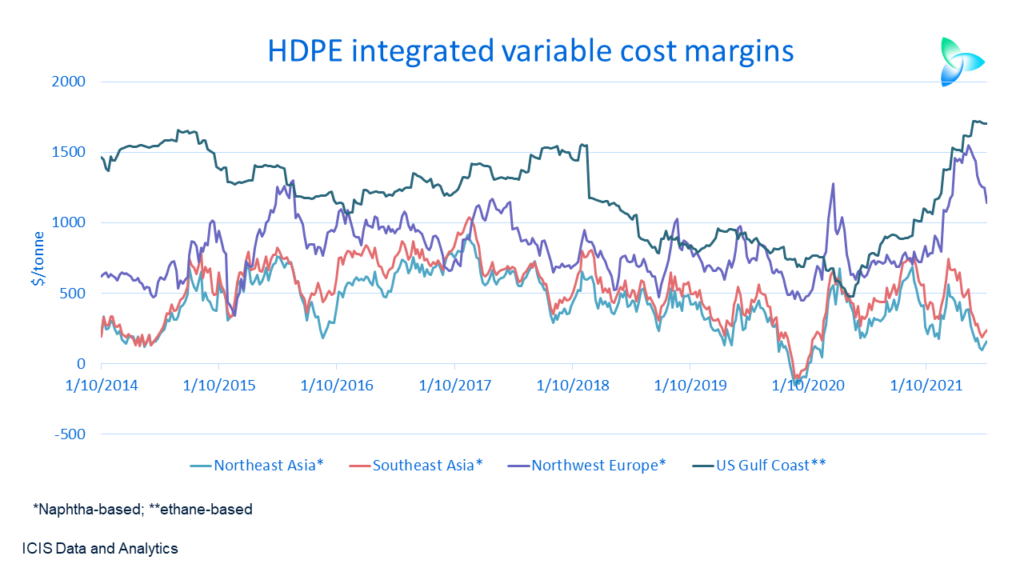 Another point that my colleague Joseph Chang made in his Insight article was that financial analysts were anticipating that petrochemical company earnings had peaked in Q2 after an excellent first half of 2021. They took the fall in oil prices and the third wave as indicating that H2 would be weaker.

Not necessarily. As I’ve said I see demand under either outcome from the third wave remaining elevated compared with before the pandemic.

And we mustn’t discount the possibility of more US supply disruptions from power outages caused by forest fires during the summer – and the 60% chance that this year’s US hurricane season will be more severe than normal (whatever normal really is given the devastating impact of human activity on the climate).

Margins don’t equal volumes, of course. But for those left operating in the developed world in the event of further major supply disruptions, profitability could easily remain at close to or even above the recent record highs.

As an important aside, the other trend I see continuing is SEA and China pricing remaining much cheaper than other regions because of container freight problems limiting exports from the regions and the weak demand fundamentals described above.

A further factor supporting this outcome are big increases in Chinese, Malaysian and South Korean PE and PP capacities.

But as the chart above illustrates, using high-density PE margins as an example, SEA and China variable cost margins were sailing pretty close to the wind up until the week ending 17 July.

They were still, though, nowhere close as bad as they were in November 2019-January 2020 when they turned negative.

If margins were to get close to or turn negative, we might see a repeat of the major operating rate cuts that occurred in November 2019-January 2020. In such an event, Asian pricing might move closer to pricing in other regions.

Here are my unchanged scenarios for global PP demand 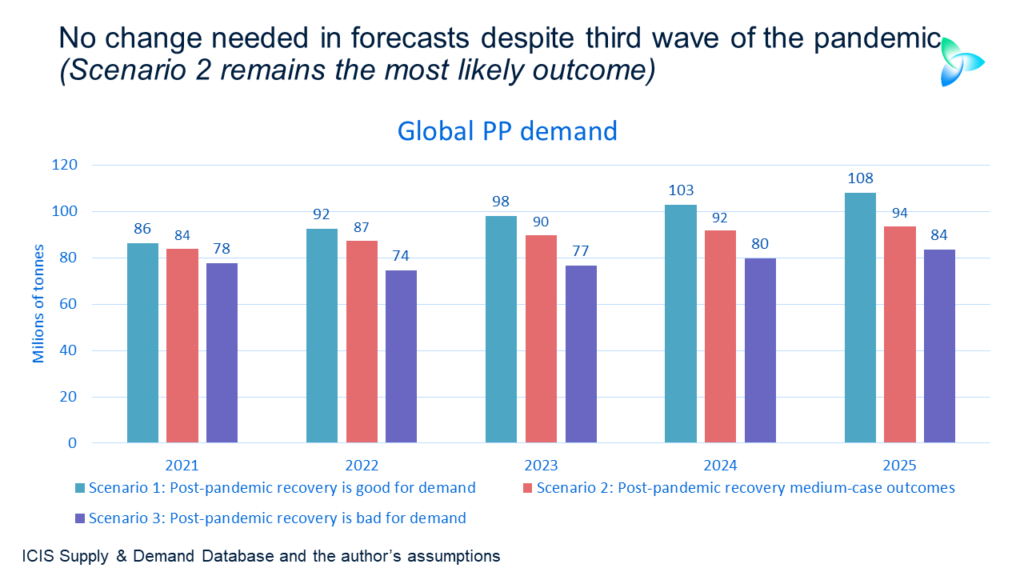 I believe that global PP consumption in 2020 grew by around 5% over 2019.  This left last year’s demand at 80m tonnes which is, of course, the basis for what I see happening next.

Scenario 1 would see growth averaging around 6% per year in 2021-2025. This is probably too high as this would involve a “Roaring 20s” economic boom. I instead see Scenario 2 as being more likely where global growth would average 4.5% per annum.

All of the above is always opinion and is here to be challenged. Sadly, we only really have opinions because once again, “the more that things change the more they stay the same”. Our models for estimating demand growth remain wholly inadequate, as I’ve been highlighting since last year.

We really do need to move entirely away from the notion that GDP drives petrochemicals growth, as it simply doesn’t any longer in the developed world and China.

What we need are highly sophisticated AI or machine learning-driven models built on all the vast amounts of real-time retail sales that are available today. Watch this space.