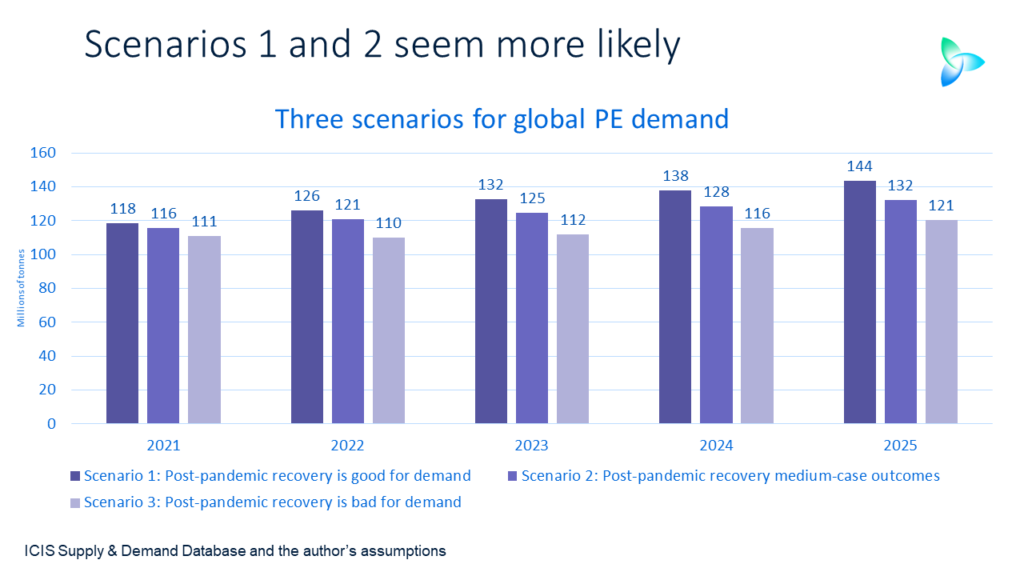 IT FEELS LIKE several lifetimes ago. If you recall, way back in November-December 2019 Asian variable cost integrated naphtha-based polyethylene (PE) margins turned negative because of the increase in US capacity.

Then in January the following year, deep Asian and Middle East operating rate cuts returned some order to the market. Then, bang, as we all know, the pandemic arrived and turned everything on its head.

The pandemic has, in my view, accentuated trends that were already well underway. I believe this means that the supply-driven downturn that started in late 2019 will not return.

Long before coronavirus upended everyone’s lives, PE demand was becoming increasingly divorced from GDP growth because of the shifting nature of end-use demand.

Booming internet sales was, I believe, a major factor behind the split between the growth of the overall economies in the developed world plus China and PE demand.

The average product bought online is dropped 17 times because of the large number of people involved in the logistics chain, according to Forbes.

This had led to a surge in demand for protective packaging made not from PE and other polymers such as polypropylene, expandable polystyrene and PET films (I will look at their demand growth prospects in later posts).

Despite sustainability pressures, the scale of demand for stuff bought online translated to a lot more consumption of virgin polymers.

I also wonder whether the recycling labels placed on some end-use products had and continues to have a psychological effect.

Consumers may not feel quite so bad about buying goods online that arrive packaged in virgin polymer if they are also buying PET bottles marked with recycling labels.

I also believe similar trends are likely to have played out in the other developed markets – Australia, Canada, Japan, New Zealand, Singapore, South Korea and Taiwan.

As I’ve been highlighting since May last year, this is the result of how our spending habits have moved even further online because of the pandemic.

“An extra 1,334 tonnes of plastic waste, equivalent to the weight of 92 double-decker buses, was generated [in Singapore] from takeaway and delivery meals during the two-month circuit breaker period of stay-home curbs, a survey has found,” wrote Singapore’s Today newspaper in a June 2020 article.

The study’s authors were six alumni students from the National University of Singapore’s (NUS) Master of Science (Environmental Management) programme.

In the critically important Chinese PE market (Chinese consumption of PE in 2020 accounted for 35% of the global total, up from 12% in 2000), demand for online sale similarly boomed during lockdowns – and not just for takeaway food and groceries.

Even though China has not had to resort to nationwide lockdowns for more than a year now, online sales remain at very elevated levels.

This is attributed to the extra convenience of buying online – the result of more efficient delivery services that have been developed in response to the last year’s sudden surge in demand.

“As our population continues to age, I also see more and more grocery deliveries to the homes of the elderly who cannot easily get out to the shops,” said a polymers trader from Tianjin.

Populations are also ageing in the US and Europe.

On the theme of convenience, $14bn of start-up money has poured into new companies offering online-purchased food deliveries in the West.

When you can order a Latte and a snack that arrives for your company meeting quicker than walking out of the office and down to the nearest shop, why bother leaving the office?

Consumers might  value the time saved more than concerns over the extra plastic packaging resulting from these purchases.

Then there is PE demand related to hygiene which was a factor behind the rise in demand for takeaway food in Singapore, the NUS students said in their study. Exposure to the risks of infection are obviously reduced if you stay indoors.

Wider hygiene demand has hugely the supported PE market since the pandemic began.

Where to stop? The list goes on and on. Think of hand sanitiser bottles made from high-density PE (HDPE) and disposable gloves, which can also be made from HDPE.

It will be many more years, I think, before we get on a plane without wearing a face mask and when we don’t find a new hand sanitiser bottle in our seat pocket.

The precautionary principle has surely cemented stronger hygiene-related PE demand for a long time in the developed world plus China.

The developing world is a different story because of the closer link between GDP and PE demand. As more people are pushed back into extreme poverty and fewer people escape extreme poverty – a major feature of economic downturns – petrochemicals demand in general tends to decline.

But more than 70% of global PE demand consists of the developed world plus China.

This makes what happens in the developing regions – Africa, Asia and Pacific minus the developed countries, the Former Soviet Union, the Middle East and South & Central America – relatively less significant.

Yes, I know, last week I did present downsides for HDPE demand involving a protracted contraction in demand in the developing world.

But such is the extra momentum behind demand growth in the developed world plus China, even several years more of declines in PE demand in poorer countries might not make much difference to the overall picture.

This is, of course, judging things from a hard-hearted dollars and cents perspective only. What is happening in the developing world I see as unconscionable because of insufficient support from the rich world.

This was typified by the failure of the G7 to pledge supplies of enough vaccines during its meeting last week in Cornwall, the UK.

Yes, absolutely, over the longer term as the ICIS Supply & Demand data show, it is developing countries that will drive global PE demand as hundreds of millions more people escape from poverty. But this beyond the current business cycle.

As always, the chart at the beginning of this blog post is for demonstration purposes only and does not represent the kind of thorough scenario work that we provide at ICIS. For details of this work, contact me at john.richardson@icis.com.

As I said at the beginning of this post, I see a good chance that the supply-driven downturn that began in late 2019 will not resume, regardless of what happens to the broader global economy.

I thus see it as likely that the demand outcomes for 2021-2025 will fall somewhere in between Scenarios 1 and 2.

Under Scenario 2, demand growth would be at a 4% annual average with cumulative demand at 622m tonnes – 36m tonnes lower than Scenario 1.

Scenario 3 sees average annual growth at 2% and cumulative demand at 569m tonnes, which would be 89m tonnes lower than Scenario 1.

Note that the above chart consolidates earlier posts on HDPE and LLDPE and adds global scenarios for LDPE. For details of the demand outlook for each of the individual grades, contact me again at john.richardson@icis.com.

And no major threat from Chinese self-sufficiency 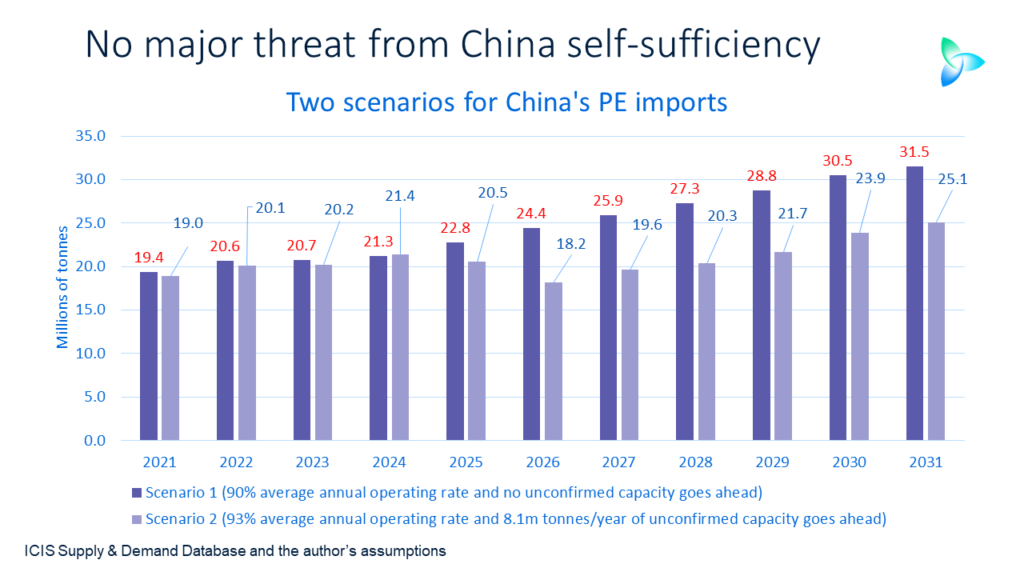 The chart at the beginning of this section is again a composite of my estimates of China’s PE imports for each of the three grades in 2021-2031.

Unlike in polypropylene, styrene monomer and paraxylene – and presuming no major investments by China in Iranian HDPE and LDPE capacity – it looks as if it could be “steady as she goes” with global PE trading patterns.

There is a scenario where China remains a major importer from all the established big destinations – northeast Asia ex-China, the Middle East, southeast Asia, south Asia and the US – over the next decade.

Based on our data, even Scenario 2 sees China’s imports at 25m tonnes in 2025 – and this downside assumes high local operating rates and all unconfirmed capacity going ahead, which is probably unlikely.

Unconfirmed capacity is projects we list with question marks in our data base because they lack approvals, financing and feedstocks etc.

All three scenarios follow the same demand growth assumption – our base case of average annual growth across the three grades at 5%.

Why this of course matters so much is because China accounted for some 43% of total global net imports of PE in 2020 among the countries and regions that imported more than they exported. This made it by far the biggest importer.

If China is therefore able to reach much greater levels of self-sufficiency over the next 10 years, it won’t really matter how strong demand growth is. There will be a downcycle over the next two to three years.

Back to sustainability – the 10,000 pounds gorilla

Sustainability is the 10,000 pounds gorilla sitting in the corner of the room that must be kept happy.

We must as an industry address the extra greenhouse gas emissions and plastic waste that would be the result of my upside demand growth scenarios.

How do we address these issues? I believe a top priority must be ensuring that the developing world gets the funding it needs to reduce emissions in general, including from the new PE plants that will have to be built to meet demand.

The plastic waste issue circles back to providing adequate rubbish collection and processing systems for the 3bn people who lack these systems, most of whom live in the developing world. No other solutions will by themselves work, including recycling.

The great news is that we should have strong earnings over the next few years to support this essential transition.

PE as a product is not the problem as it delivers major societal value. The problems are instead the emissions generated to make PE and how we dispose of the polymer.

PREVIOUS POST The pandemic, climate change, plastic waste and the great divide: the world in 2025
NEXT POST Container freight crisis could continue until or unless the developing world is fully vaccinated