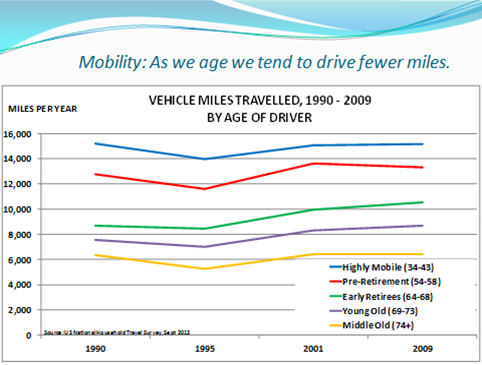 The blog, like most people, doesn’t like change.  Change creates uncertainty, and makes us all nervous.  Thus in recent years it has privately hoped that its forecasts about (a) the inevitability of the subprime crisis and (b) the transition to the New Normal, would prove wrong.  Life would be so much easier if nothing changed.

Thus it is distressed to see developments at Lanxess, one of its favourite chemical companies.  Lanxess has achieved a great deal since becoming independent from Bayer, even gaining a place in Germany’s Dax stock market index in 2012.  But now it is facing a more uncertain outlook, and its CEO, Axel Heitmann, is departing “by mutual agreement” with the Board.  The reason is the arrival of the New Normal, as the Financial Times reported:

“About 40% of the company’s sales remain linked to the automotive and tyre industries which have suffered in the depressed state of the European car market.”

The key is the slide above, from the US Dept of Transport‘s National Household Travel Survey.  As it states:

Overall, therefore, someone aged 74+ is driving 60% fewer miles than someone aged 34 – 43.  And these trends are common across the world.  Older people don’t need to act as a taxi service for their children, or to make weekly trips to shopping malls to feed and clothe a growing family.  Equally, they stop driving to work when they retire.

And even as life expectancy then began to increase, its impact was hidden during the 1983-2007 BabyBoomer-led SuperCycle by the vast number of younger Boomers in their peak driving years.

Today, though, Lanxess’s home market of Germany is a clear example of these demographic changes in action, as the blog discussed in detail in December.  Germany’s median age is 45.7 years, and life expectancy around 80, whilst German women now have an average of just 1.2 babies.

Even worse, for any company supplying the auto industry, is the fact that young men are no longer so interested in owning cars – or even in taking a driving test.  By definition, of course, someone without a driving licence will not own a car.  Thus a report from IFMO, BMW’s research unit suggests there is :

“A strong indication of profound changes in the travel behaviour of young adults in industrialised countries with signs of decreasing car orientation and reduced overall travel” .

Whilst a separate IFMO report, discussed in the blog a year ago, shows that car ownership has decreased in the core 30-39 age group in Germany and most Western countries.

Thus IFMO speculate that we are now seeing a “peak car” phenomenon develop, due to three main factors:

As the blog discussed in its recent New Year Outlook, it is wishful thinking to believe there will be a quick rebound in overall demand under the Demographic Scenario.  Companies such as BMW clearly understand this, and are instead developing new business models, such as car-sharing based on ‘pay-to-use’, which offer much better growth prospects for the future.

Equally important is the fact that the highly profitable ‘middle ground’ of the SuperCycle is disappearing.  As the blog discussed in October, successful companies of the future will instead either be niche players like Jaguar who offer high perceived value, or mass-market players like Dacia offering low delivered cost.

Suppliers to the industry will have to follow this segmentation, if they wish to remain profitable.  ‘Design to cost’ will be the critical success factor for any mass-market player.

Thus today’s problems at Lanxess are, indeed, a case study for the auto industry as we move into the New Normal.  And, of course, central banks and governments are powerless to change this dynamic.  They cannot print babies: nor can they magically turn 60-year-olds back into 35 year-olds.

The blog sends its best wishes to the skilled and committed people at Lanxess, and is confident they will rebound quickly from today’s setbacks.  Like Jaguar, Dacia, BMW and Mercedes, they will instead develop new business models that will bring them even greater success in the New Normal.