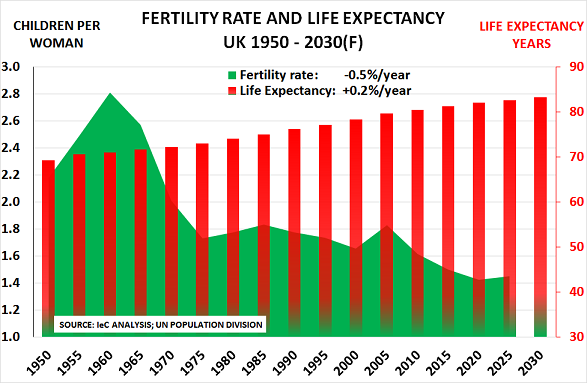 Many readers have asked to see how the UK economy is being impacted by its ageing population, following the blog’s December series on the US, China, Japan, Germany and France.  As the chart shows, it is in a very similar position to all of these countries:

This increase in life expectancy is, of course, a major achievement.  It is easy to forget that Western life expectancy was just 36 years in 1820, less than 200 years ago (and in the rest of the world it was only 24, the same as in the year 1000).  Almost overnight, in historical terms, people then began to live for longer.

The UK, as the world’s leading economic power, was at the forefront of this change, closely followed by the other W European nations and the USA.  Increased life expectancy boosted economic growth, as described by the great economic historian Angus Maddison in his authoritative ‘The World Economy: A Millennial Perspective.’

In turn, as we noted in chapter 1 of Boom, Gloom and the New Normal, the UK became the second country in the world to introduce a state pension in 1908.  Even then, however, life expectancy was only 50, whilst pension age was set at 70.  And only those earning less than 12 shillings/week (£40, $65, €45 in today’s money) were eligible.

The UK thus followed Germany’s lead in 1889, which had also set pension age at 20 years above life expectancy.  Only 600k of the UK’s 40m population were eligible for the pension, which was worth just 5 shillings.  Today, by comparison, the state pension has become a universal benefit, received by 17% of the UK’s 63m population.

The problem is that our thinking about pensions and retirement age has not kept pace with developments in life expectancy.  And it has been left well behind by the collapse in fertility rates.  The number of those entering their wealth creating period between the ages of 25 – 54 years is 17% lower than in the 1946-70 BabyBoom.

The result has been to effectively create a ‘sandwich generation’, where today’s Wealth Creators will increasingly have to support their parents financially as well as their own children.  And unlike their parents, they also have to pay record prices for their homes and repay college tuition loans.

It is thus not surprising that economic growth has remained very slow since the credit bubble ended in 2008.  Governments have tried to revive the bubble, in the belief that ever-higher house prices will ensure their re-election.  But in reality, they are simply adding to the debt burden.

As in other countries, there is little awareness of the likely economic impact of these developments.   Yet as the new OECD Pension Handbook highlights, 29% of the working age population are already over 65 years.  And politicians have chosen to only make minor adjustments to pension age:

As elsewhere in Europe, detailed pension arrangements are too complex for a blog post, but the key facts are:

Overall the OECD calculate that gross pensions are worth 31% of median earnings.  In addition, many people will receive a small private pension from their employer and/or personal savings.  But the average ‘pension pot’ is only £30k, providing a pension of just £1200/year.

This might not have mattered too much from an economic viewpoint if people still died close to pension age.  After all, less than 1 in 3 adults were in the New Old 55+ generation as recently as 1950.  But the ageing of the BabyBoomers means there will nearly 1 in 2 adults (43%) in this cohort by 2030.

This will inevitably result in a major decline in spending power, as more and more Boomers move into retirement.  And as household spending is 60% of UK GDP, the economy will almost inevitably see low growth and deflation as a result – making the debt burden even harder to repay.

Yet as in the other countries covered in this series, there is very little discussion of the likely impact of this development on the wider economy.  Instead policymakers prefer to focus on important but relatively minor issues such as the impact on social security and healthcare costs.

But one day, the electorate is going to wake up to what is happening.  And it is unlikely to be happy when it does.