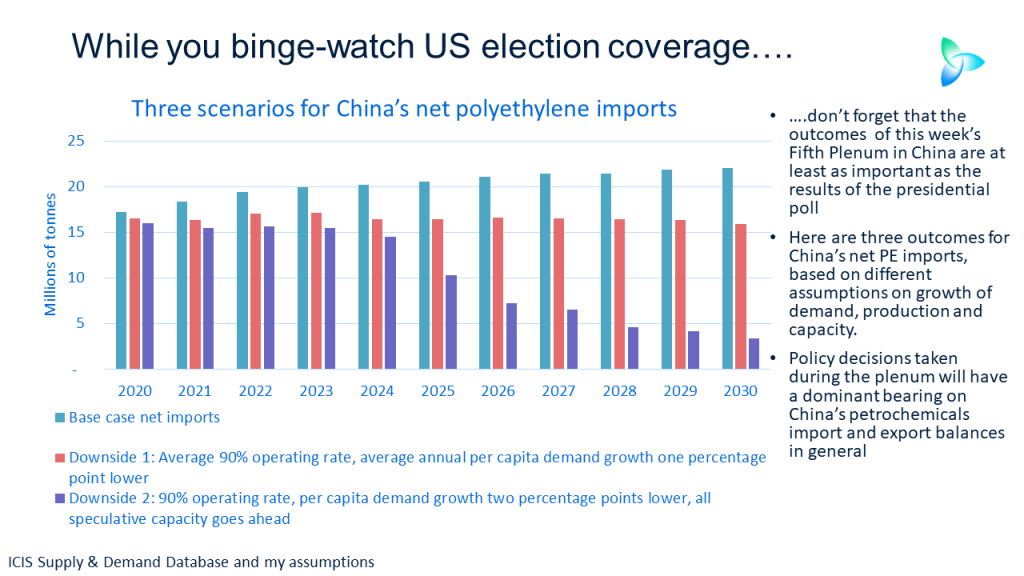 THERE are so many angles to this that, as with the potential outcomes of the US presidential election, China’s Fifth Plenum is worth many acres of newsprint. The plenum is taking place on 26-29 October, whereas, as everyone bar the odd Martian knows, the US election is on 3 November.

The plenum will determine China’s economic direction over the next five years as the meeting will decide the details of the 14th five-year-plan, which runs from 2021 until 2025. The plenum will also discuss a broad economic plan for the next 15 years.

In 2000, during the George W Bush versus Al Gore presidential race, the data tell us that political events in China were much less significant than what was taking place in the US.

As usual, let us take polyethylene (PE) as an example to explain why this was the case. In 2000, the US accounted for 24% of global demand. In terms of tonnes, this amounted to 12.3m tonnes. But China only made up 12% of the global total at just 6m tonnes, according to the ICIS Supply & Demand Database.

The tipping point, when you should have started taking a lot more notice of political events in China occurred in 2008. In that year, China edged ahead of the US as its consumption reached 12m tonnes versus 11m tonnes in the US. They respectively made up 18% and 17% of the global total.

Just look at the situation today. There is, quite simply, no rational basis for the mountains of printing ink being devoted to the outcome of next month’s US election compared with the paltry coverage of the Fifth Plenum. In 2020, ICIS estimates that Chinese demand will comprise 35% of the global total at 35m tonnes against the US at just 12% at 13m tonnes.

China’s importance to the global PE industry is set to increase even further. We estimate that by 2030, China will account for a whopping 43% of the global total at 56m tonnes versus the US at again 12% and 15m tonnes.

Here is the thing as well: very similar statistical patterns apply to all the other petrochemicals and polymers. There isn’t a single product where China hasn’t become the world’s biggest consumer, with the US importance in the global industry diminishing across all the products.

Interestingly, the tipping points for most of the products, when China became the biggest global consumer, overtaking either the US or Europe, occurred in 2008 and 2009.

One of the reasons why the US election is receiving such disproportionate coverage is the mainstream media’s Western bias. The other reason is the transparency of the US election versus the opacity of the plenum.

When the plenum is over, China’s state-run media is expected to publish a brief statement on its outcomes, with more details emerging up until next March’s National People’s Congress (NPC), China’s annual parliamentary meeting. The plenum’s policy decisions will be formally agreed by the NPC.

But just because something is difficult doesn’t mean that we shouldn’t try! I therefore plan to write three blogs on the plenum,  including today’s, as follow-ups to my posts in September.

This blog will look at China’s push towards greater petrochemicals self-sufficiency in the context of different outcomes for demand growth, built around the risks I highlighted for growth in September.

The second blog will examine China’s green agenda. I believe China is set to add to its already dominant position in the global renewable energy industry, increase its already substantial role in electric vehicles and launch a major investment programme in plastics recycling.

You should also expect China to make major headway in artificial intelligence and improve its self-sufficiency in semi-conductors, which is its Achilles Heel because of heavy import dependence.

The third post I will leave until the dust has settled after the US presidential election in order to assess if there any likely to be any changes to the critical US/China relationship and how China might respond.

Perhaps there won’t be that many changes in the US/China relationship regardless of who wins. Both the Democrats and Republicans agree that China needs to be contained. How that containment would be attempted differs between the two parties. But their headline objectives appear very similar.

One of the things that constantly amazes me is how people get caught out by events in China. Take where we are today in paraxylene (PX), polypropylene (PP) and styrene monomer (SM).

It is very easy to produce outcomes, based on 2020-2030 data, where China soon becomes completely self-sufficient in all three products from the position today when it is by far the world’s biggest importer.

One could have reached the same conclusions in 2014, when China announced it was going to push much harder towards petrochemicals self-sufficiency.

Despite the opacity of the detail of Chinese government policy, there is one aspect of policy in China that is usually crystal clear: China does what it says it is going to do. This made the announcement in 2014 so important, as I pointed out at the time.

China said in 2014 that it wanted to add value to manufacturing in an effort to escape a middle-income trap made deeper by a rapidly ageing population. Petrochemicals was viewed as a higher-value industry that would help move China away from mainly being the low-cost manufacturer for the world.

In 2014, pushing towards greater petrochemicals self-sufficiency was also about reducing reliance on imports. Although the geopolitical climate was a lot calmer, government policy had recognised the need to hedge against import disruptions.

Since 2014, the route has changed as the direction of travel has stayed the same. Coal-to-petrochemicals were then seen as an important means of getting to greater self-sufficiency, but the refinery-to-petrochemicals route has since taken over for cost and environmental reasons.

The refinery and petrochemicals sectors have been opened-up to more private investment to encourage rapid capacity growth. Some of China’s giant new refineries are privately owned and heavily integrated into petrochemicals.

In line with China’s political commitment to a cleaner environment was the decision to close-down small and heavily polluting chemicals plants, near to urban centres, and shift capacity to the industry parks. This process looks set to continue.

Liquids cracking will continue to dominate olefins and olefins derivatives capacity additions. China will carry on leading the world in additions to refinery capacity, even though its fuel demand growth is likely to decline for sustainability reasons. As the South China Morning Post wrote:

At least four [refinery] projects with about 1.4m barrels a day of crude-processing capacity, more than all the refineries in the UK combined, are under construction. That’s after the country already added 1m barrels since the start of 2019. All that capacity will add more petroleum products and plastics just as China National Petroleum sees fuel demand peaking in 2025 as electric vehicles sap consumption.

It is also important to note that all this extra refinery capacity will mean lots more refinery propylene and feedstock for aromatics.

We could soon be left with the last two men standing: PE and ethylene glycols (EG), where it seems unlikely that there is any immediate risk for exporters of China reaching complete self-sufficiency. Not in the long term, however.

I will only focus here on scenarios for PE net imports over the next ten years, based on different outcomes for demand, production and capacity. Watch out for a LinkedIn post on Friday, where I will consider scenarios for EG.

As with the increase in consumption by tonnes, the rise of China’s per capita PE consumption has been spectacularly good over the last 20 years. ICIS estimates per capita consumption at 4.7 kilograms (kgs) in 2000. By 2019, we forecast that his had risen to 24.5 kgs, an increase of 425%. Wow.

But China confronts a myriad of economic and geopolitical challenges. They include major income inequality between the rich coastal provinces and the rest of China, especially the far west, and a rapidly ageing population. China might lose the new cold war against the US. Where would it then stand economically?

So, we must consider scenarios where China’s growth in personal wealth – reflected in per capita consumption across all the petrochemicals – is beneath base case assumptions.

Another aspect to the outcome for PE will be the extent to which redesigning of packaging will slow PE demand growth in China. Redesigning is happening globally as brand owners reduce polymers by weight in packaging, in response to the plastic rubbish crisis.

China’s bans and restrictions on some single-use plastics is another story, as this might merely shift demand away from virgin to recycled plastic without damaging overall demand.

The first downside would reduce global PE demand growth by 11% versus our base case, with the second downside reducing global growth by 22%.

These outcomes assume no knock-on effect on the rest of the global economy of a weaker-than-expected China. But knock-on effects would be inevitable, making the final outcomes for global PE demand even worse than 11% or 22% lower.

Now let us look at capacity and operating rates as we build towards the three scenarios for net PE imports (imports minus exports), which you can see the above slide.

The first scenario – Base case net imports – assumes our base case growth in PE per capita consumption of 4% per year.

Downside 1, the second scenario, pushes operating rates to a 90% average and assumes only 3% growth per annum in per capita consumption. Net imports edge down from 17m tonnes in 2020 to 16m tonnes in 2030.

Impossible? Why, in a world where all the old economic growth assumptions have been turned on their heads? You simply must build alternative outcomes like this to ring fence your business, to protect it against of all today’s elevated and highly complex risks.

China’s economy may remain fine as it builds crackers that have yet to be announced. I am sure if we all went back to our list of Chinese crackers in 2014 and compared it with what is coming on-stream this year, there would be gaps.

Or China could remain a big importer of PE but may only import from fellow members of its Belt & Road Initiative (BRI).

This would make geopolitical sense and might make a lot of economic sense, if, as seems to be the case with Iran, China obtains competitively priced imports from countries inside the BRI.

Such an outcome could leave the US out in the cold, unable to export PE to most of the developing world which falls within the BRI, if the BRI becomes a giant trading zone protected by high tariff barriers.

There are so many scenarios, so much complexity. Something else which is crystal clear, however, is this: It is critically important that all of us take notice of the Fifth Plenum as we binge on US election coverage.

PREVIOUS POST Debate about refinery closures, re-configurations a harmful distraction for the petrochemicals business
NEXT POST Global polyethylene markets: What's happened in 2020 and an outlook for next year