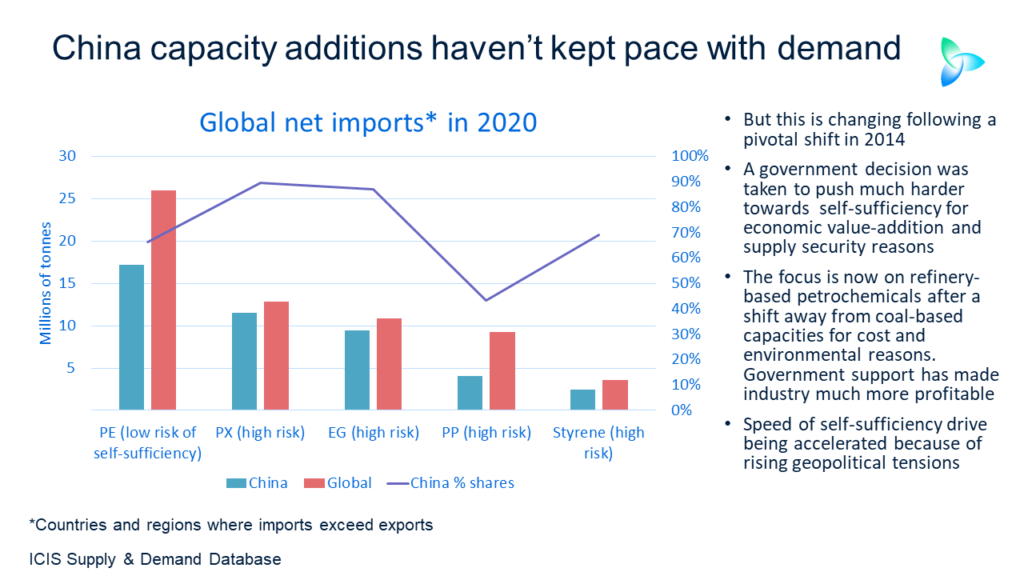 AS OF yesterday, around 70% of US paraxylene capacity was offline. No less than 67% of US ethylene capacity and 14% of benzene capacity had been impacted by the severe winter weather, meaning of course that US styrene monomer (SM) output will have also been severely curtailed.

I could go on, covering the effects of the US outages on all the other products that have also featured in my coverage over the last few weeks of rising Chinese self-sufficiency.

For instance, a staggering 90% of US polypropylene (PP) capacity had yesterday been affected by the power outages resulting from the cold weather. Eighty five percent of ethylene glycols (EG) capacity was completely shut down.

And an average of 54% of US polyethylene (PE) capacity across the three grades had been affected by what in my view was not a freak event; it was instead part of the climate New Normal we need to get used to.

The global PE business will undoubtedly, in my opinion, enjoy another strong year, both for supply and demand reasons.

Adding to the US supply crunch will be China’s inability to keep up with its soaring demand. Global demand will also be in a “no lose” situation.

Whether or not we get on top of the virus in 2021 will, I believe, make little difference to the quantities of PE demand; the only thing that will change will be the composition of downstream demand.

On the demand side, the same will in my view apply to global PX, SM, PP and EG demand. BUT what Asian and Middle East producers need to really worry about is China’s progress towards self-sufficiency in these products during 2021.

Sure, the tightness in global markets resulting from the US outages will provide good support to Asia and the Middle East.

An excellent Insight from my ICIS colleague Al Greenwood details the lack of clarity around how long US supply will remain offline.

A lot will depend on the extent of damage to plant equipment. If companies were able to shut their facilities down in planned and precautionary ways, damage should have been minimised. It will take several weeks for the full picture to become clear.

But please ponder the chart at the beginning of this section from our excellent ICIS Supply & Demand Database. It shows that in PX and EG there really is no other significant import market other than China.

If Chinese imports collapse in 2021, Asian and Middle Eastern exports are in deep trouble. PP and SM are a little better placed. The effects of Chinese import collapses in PP and SM would, however, still be severe.

Now let me complete my initial look at Chinese self-sufficiency in 2021 (I will revise my outlooks as the year further progresses) by firstly re-examining PX. I will then look at SM for the first time later in this post. 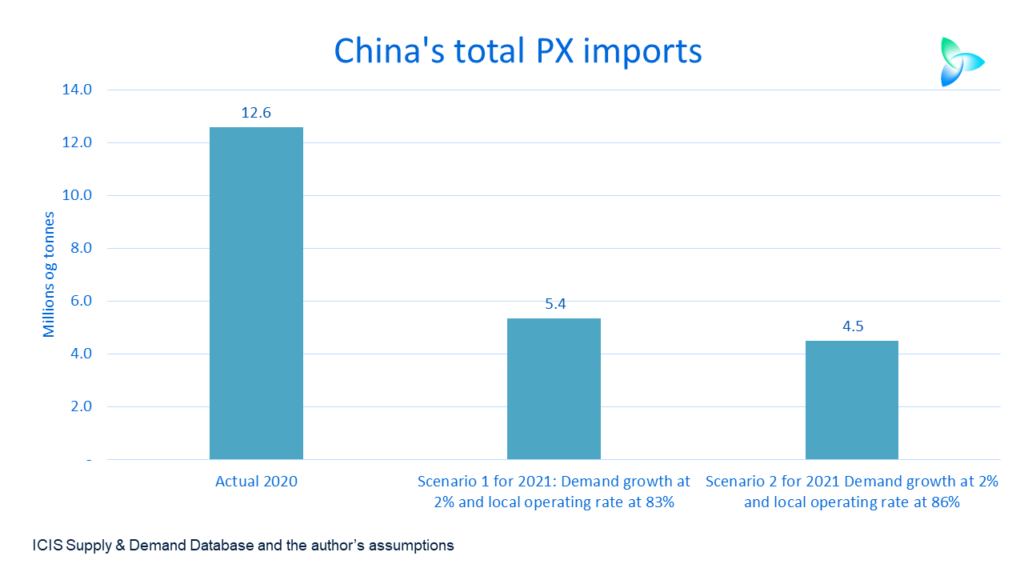 Last year was a very strong year for Chinese PX demand. This was mainly the result of the country’s ability to export the goods needed for our pandemic ways of life.

Whilst exports of clothing needed for travel and work fell, there was a big surge in exports of face masks, partly made from polyester. There was also a big rise in online clothing sales later in the year and booming demand for pillowcases, sheets, curtains and carpets as the cash-rich global middle classes refurbished their homes during lockdowns.

This led to Chinese PX demand growth of around 6% in 2020 versus our original base case forecast of a decline in growth of 1%.

The 1.5m tonne/year facility – Brunei Hengyi Petrochemical – is effectively domestic capacity as it is majority-owned by a Chinese purified terephthalic acid producer. This is confirmed by Brunei’s exports to China matching our estimates of all the production from the plant.

I assume Chinese PX demand growth will moderate to 2% this year as China will struggle to replicate the stellar export growth it saw in 2020.

If growth in PX demand were 2% in 2021 this would not be at all bad; in fact, it would be close to the long-term historic average. The problem is supply. Chinese capacity, again including Brunei, jumped by 48% in 2020 and is forecast to rise by a further 10% this year.

South Korea the most exposed followed by Japan 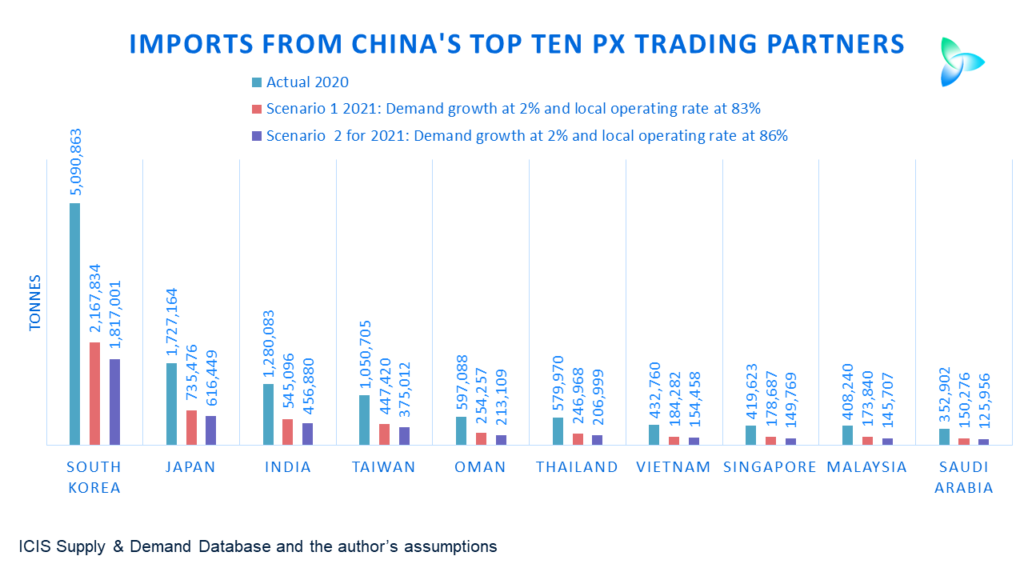 The above chart uses the same approach as my earlier coverage of China’s other big import markets. Taking my forecasts for total 2021 PX imports, I assume that China’s top ten trading partners win the same percentage shares of the China market as they did in 2020.

Let us put the US PX production problems into further important context. China accounted for 85% of South Korea’s PX exports in 2020, which was of course its biggest trading destination. The US was the seventh largest at less than 1% of South Korea’s total shipments. 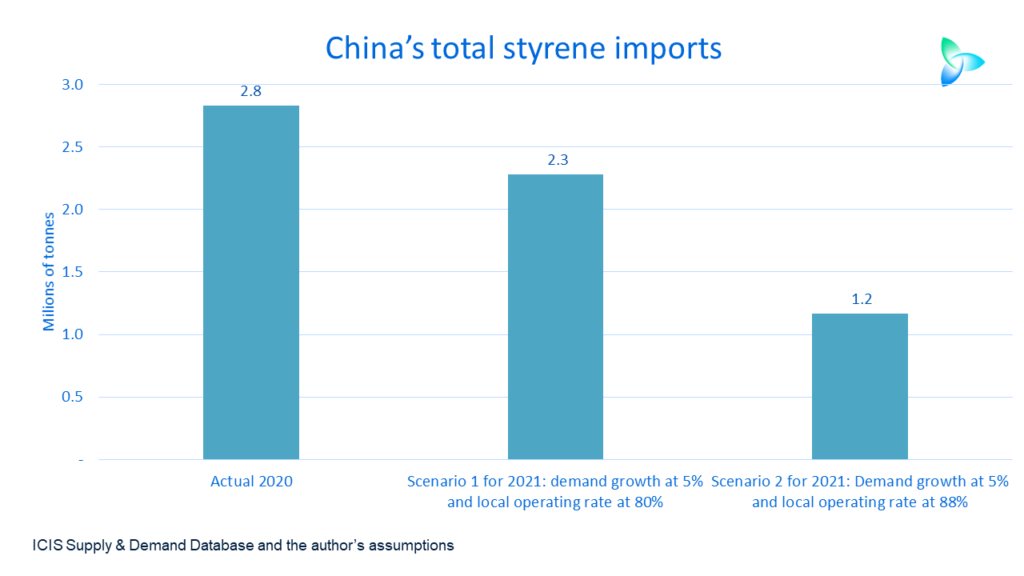 As with PX, China’s SM demand in 2020 surprised on the upside. We were again expecting negative growth during the early days of the pandemic.

But booming demand for electronics and white goods – along with stronger demand for food packaging – provided huge support to SM consumption. The final numbers for 2020 suggest that SM demand might have grown by as much as 18%.

I expect SM growth to moderate in 2021 as I believe China will struggle to maintain the fantastic growth in manufacturing exports that it saw during 2020. My forecast is for SM consumption to rise by 5% – again under both Scenarios 1 and 2 for this year’s total imports.

Following the same pattern in PX and most of the other products I have covered in this series, Scenario 1 for 2021 assumes the same operating rate as our assessment for last year – 80%. 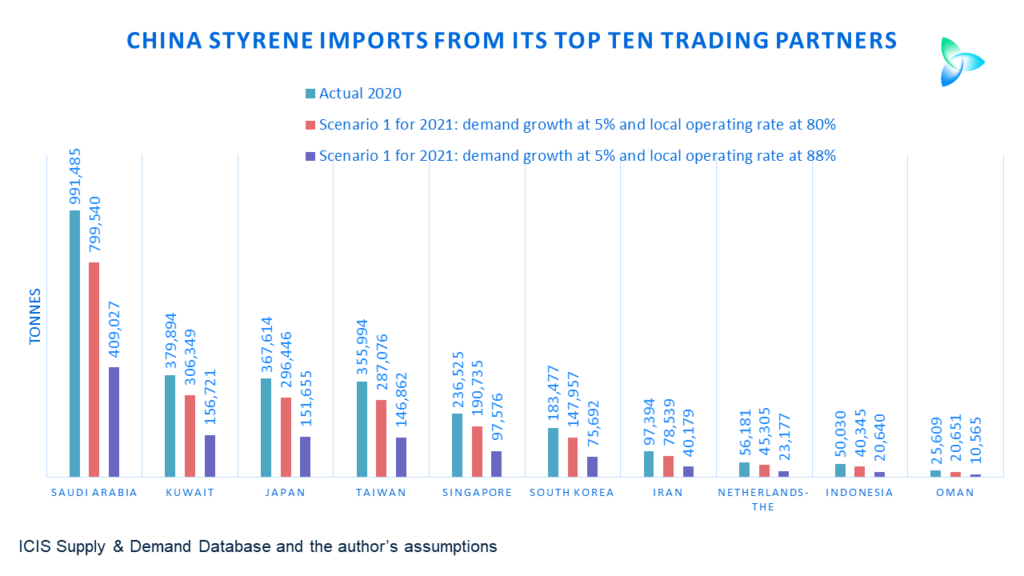 Saudi Arabia was China’s biggest SM trading partner in 2020 with a 35% share of total imports followed by Kuwait with 13%. The above chart again follows the same approach. I assume China’s top ten trading partners win the same percentage shares of Chinese imports in 2021 as they did last year.

Here is some more essential context relating to the importance of the losses in US SM production. The latest data we have for Saudi Arabia’s SM exports is for January-July 2020.  China was Saudi Arabia’s biggest destination at 62% of its total exports.

The kingdom did not export any SM to the US or to South America in 2020, one of the regions most affected by the US production slump. But this might of course change during Q1 as trade flows are diverted.

Virtual complete self-sufficiency in PP, EG, PX and SM is only a question of time

I might be too pessimistic on Chinese growth and/or new local capacity could be delayed.

But do the maths for yourself if you subscribe to our ICIS Supply & Demand Database. It is only a question of time before China reaches virtual complete self-sufficiency in PP, EG, PX and SM. Another good year for imports in 2021 would merely delay the inevitable.

What we can also conclude from my series of focuses on Chinese petrochemicals self-sufficiency is this: China is by far the most important market in the world. Nowhere, including the US, comes anywhere close to being as important.

PREVIOUS POST China's PP imports in 2021 could fall by as much as 53% over last year
NEXT POST China's petchems market rally: we don't have enough data to decide whether it is sustainable