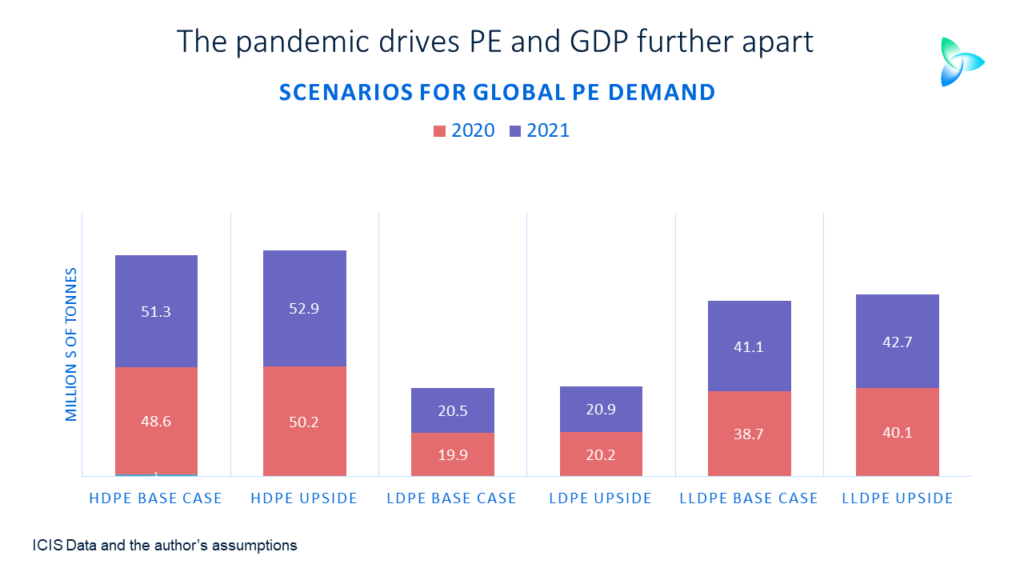 THE THING is, as I discussed in my 9 February blog post, we simply do not have our hands on the data. Unless we improve our access to data, and greatly ramp up our ability to process and analyse the numbers, the petrochemicals industry will remain largely in the dark on demand.

We will continue to leave large quantities of money on the table because of our inability to adjust sales and production tactics in response to micro changes in demand.

This was demonstrated by my upside scenarios for global polypropylene (PP) which I provided in my post on Tuesday this week.

I believe it will be the same story in polyethylene (PE). The section below provides some of the details behind the calculations and rationales for my 2020-2021 upsides contained in the above chart.

Our editors first heard of panic buying in supermarkets that boosted packaging demand. Next, we detected the rise in demand for durable goods such as laptops, washing machines, rolls of wallpaper and tins of paint in the West.

We also made an early call on the rise in demand for petrochemicals and polymers that go into hygiene products. We heard that packaging demand was receiving a further boost from more eating at home and less in restaurants.

The durable goods boom was less of a big deal for PE as it was for PP and the other petrochemicals and polymers that heavily go into durable goods end-use markets. PE is mainly used in food packaging. But the extra hygiene products and laptops that were sold in 2020 still needed to be packaged or wrapped in PE.

Recognising and monitoring the four megatrends

A deep and granular knowledge of downstream demand did not used to be required because PE and other petrochemicals consumption tended to change in line with GDP – for example, what happened in 2008 versus 2007 as global GDP collapsed.

The recovery in GDP growth in 2009 also made it obvious that petrochemicals demand would come roaring back. Global PE demand rose by 3% in 2009 versus its 3% decline in 2008.

Forecasting therefore mainly rested on estimates of GDP and assumptions of multiples over the estimates to get to PE consumption.

Understanding demand all the way down to the retail shelves is also devilishly difficult and complicated. So, even where people felt there was a need to better understand end-use markets, the primary focus was on GDP and upstream supply issues because these measurements were so much easier.

Many of the data sets are already available – for example, data gathered via supermarket loyalty cards.

From April last year, supermarket spending patterns highlighted a big change from 2008. In 2008, many lower wage workers in the West cut back on grocery spending because they had lost their jobs. In the US, they had also lost their homes because of foreclosures.

But this time around, spending on groceries was supported by government income and unemployment spending programmes for lower wage workers. Spending on chocolate biscuits and ice creams by low-paid workers increased rather than declined in 2020 compared with the previous year.

What did this also tell us? That the scale and effectiveness of government stimulus programmes would be critical determinants of the strength in petrochemicals demand. But I haven’t read a single piece of statistical analysis detailing the impact of government spending on demand. This needs to change.

Further complications relate to the four – and only four – megatrends that have been identified by the industry: sustainability, geopolitics, demographics and, much more recently, the pandemic.

How will ageing populations in the West reshape packaging demand over the long term as people living on pensions eat less in restaurants and more at home? How will the rise of the influence of Millennials, another key demographic driver, shape the push towards less is more – reduced use of non-recyclable PE in packaging for sustainability reasons?

On the issue of sustainability again, the long-term decline in oil prices creates a potential collision with very youthful populations in the Middle East. How will Middle Eastern governments fund job creation schemes as oil revenues decline? Might high unemployment lead to geopolitical tensions?

As I said, at a very micro level a lot of the data is already out there; it just needs to be collected and processed through advances in digitalisation. Petrochemicals sales managers must also spend more time talking to customers and customers of customers.

Petrochemical companies, as I have long argued, also need dedicated teams that focus on the four megatrends and their constantly fluctuating implications for short- and long-term demand.

Now let us look at the PE demand estimates contained in the above chart in some further detail.

As with PP, some 70% of global PE consumption is generated by the US, Canada, Europe, northeast Asia (NEA) ex-China (Japan, South Korea and Taiwan) and China. China alone was responsible for a leading 35% of global demand in 2020. Europe was in distant second place at 16%.

Why this matters here is because my upsides in the above chart are entirely based on higher rates of growth in the developed world and China versus our base case. I have made no changes to our base cases for growth in Africa, Asia & Pacific, the Middle East, South & Central America and the Former Soviet Union.

Rather than blind you with a plethora of numbers, let me just detail my upside versus our base case for high-density PE (HDPE). If you are interested in the details for low-density PE and linear low-density PE, contact me at john.richardson@icis.com.

We had expected the US and Canadian HDPE markets to each see flat growth in 2020. I am instead predicting plus 2% for both countries in my alternative scenario.

Our 2020 base case for Europe was minus 2% but I see a positive 2% growth. The base case for NEA ex-China was a steep 8% decline, but growth is again more likely at a positive 2%. Base-case growth for China was at 7%. But I am instead assuming 12%, the result of discussions with the market and our data for net imports and local production.

This year I see developed-world growth at a percentage point higher than in 2021 because of further big government economic stimulus programmes. As with PP, I don’t believe it matters whether we get on top of the virus in 2021. Success or failure won’t change the quantities of PE demand, only the nature of demand.

HDPE demand growth in China will, however, moderate to 7% in 2021 on a first-quarter slowdown in exports of manufactured goods and weaker-than-expected Lunar New Year demand, the result of a limited second wave of the pandemic in China. But 7% growth would still be very good.

Navigating the new demand environment is, as I said, going to be very complex and difficult. But if we sidestep the challenge our industry will be perpetually like the proverbial deer caught in the headlights, unable to move left or right. We will lose more money than we spend on better demand management.