WE ARE STILL waiting for detailed data on China’s petrochemicals and polymers imports in January and February 2021. This is just one of many China data holes for January-February.

We do know, however, that overall imports of plastics in primary form rose in volume by 8% in January-February 2021 versus the same months last year and by 25.6% in value terms.

But this means very little. Plastics imports in volume and value terms were always going to rise on a year-on-year basis because last year, China was in the middle of its worst phase of the pandemic.

What would be a little more useful would be knowing how plastics imports rose versus January-February 2019- before the pandemic. But this would still not be a “like for like” comparison.

The reason is that during this year’s Lunar New Year holidays (LNY), which ran from 11-17 February, many of China’s factories stayed open.

This was to prevent migrant workers from travelling home and spreading coronavirus. China has seen a limited second wave of the pandemic.

China’s ports were also kept open during this year’s holiday break, I was told last week, but I haven’t been able to confirm this.

So, think about it: You might read booming January-February 2021 plastics imports versus 2019 as a sign of a strong economy. But, in fact, booming imports could be largely down to factories staying open this year – and possibly also the ports.

The same could apply to the overall official production numbers for January-February 2021, which were released on 15 March.

The official production numbers showed a 35.1% rise compared with January-February 2020, which is irrelevant as China was in the middle of the pandemic last year.

There was also a 16.9% rise in industrial production compared with 2019, which, as I’ve explained above, may or may not point towards a booming economy, depending on distortions caused by an unusual 2021 LNY season.

What really counts in all these comparisons – as I keep emphasising because it is so, so important – is comparing data points for January-February 2021 with Q4 last year.

It is maintaining momentum that matters as Q4 2020 was an exceptionally strong quarter. The full-year 2020 was also an awesomely strong year for China’s petrochemicals demand as the chart below reminds us. 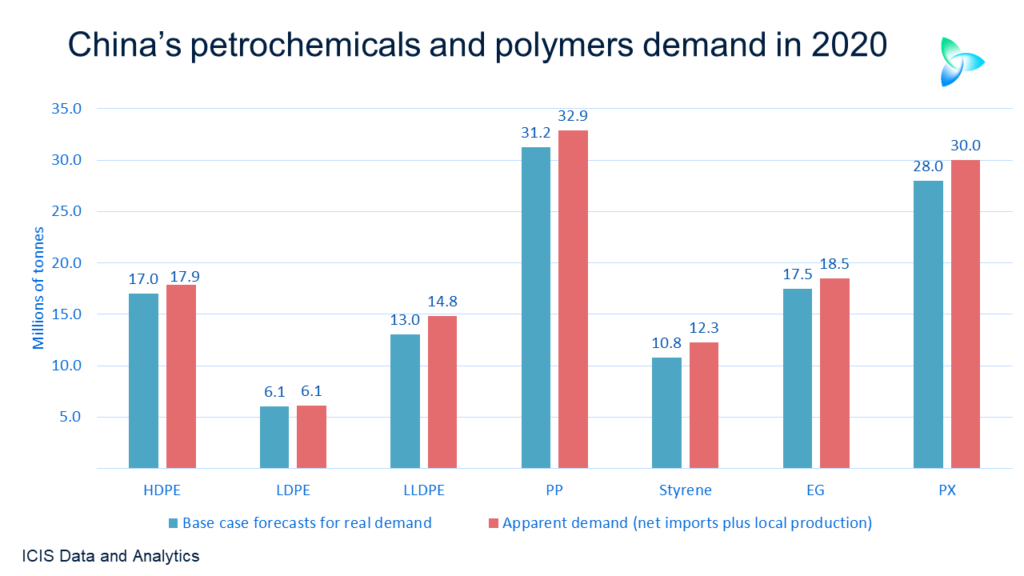 Total January-February 2021 Chinese exports versus Q4 last year is the most important measure we don’t have. This is because it was the strength of Chinese exports that was the main reason for last year’s booming petrochemicals demand.

The 2020 “China in, China out” story that I have detailed before involved a surge in petrochemicals imports that were re-exported as finished goods. Booming exports also supported strong growth in local petrochemicals production.

Perhaps the good news from yesterday’s official data release was that China’s January-February 2021 retail sales were up by 6.4% versus the same months in 2019.

But we don’t know whether this increase was mainly, or even entirely, the result of people spending more on goods because they couldn’t travel to see relatives. Online sales may well have gone through the roof because people were stuck at home, unable to travel.

Also, and this is critical, we don’t know whether we can entirely depend on the official retail sales numbers. Last year, for instance, the China Beige Book said that retail sales fell by 4.8% versus the official 3.9% decline.

Plus – and again this is so, so crucial – we don’t know how the global container-freight and semiconductor shortages have affected China’s export growth in January-February 2021 versus Q4 2020.

Building scenarios is the only way forward

It is what it is. China will remain a data black hole for the foreseeable future with the above debate about the real strength of China’s economy in January-February 2021 a great case in point.

So, all we can fall back on are scenarios – best-case, medium-case and worst-case – for what is going to happen in China this year.

How do we start building these scenarios? One of the starting points – because of the critical importance of China’s exports as a driver of the economy – is whether global demand for petrochemicals will be stronger the same or weaker in 2021 than last year.

I thus advise using these three broad outcomes – which I have used to estimate global polypropylene (PP) and high-density polyethylene demand in 2021-2025 – as a basic building block:

Scenario 1: Petrochemicals demand could boom as high levels of personal savings are unlocked in the developed world and unprecedented levels of fiscal and monetary stimulus further buoy consumption. Australia has enjoyed soaring retail sales and a rebound in the housing market because it emerged from the pandemic several months ago. The rest of the West might follow, with the boom also boosting China’s critical export sales. It has been suggested that the next few years could be like the “Roaring 2020s”. During the 1920s, the global economy boomed after the Spanish Flu pandemic.

Scenario 2: Alternatively, the outcome could be neutral because consumption was already very good in 2020. As we emerge from the pandemic, there may be less demand for some of the goods we needed during lockdowns but more demand for “Old World” services such as travel. The extra demand from travel could be cancelled out by the decline in demand for the goods we no longer need.

Scenario 3: What about the risks of inflation? Demand could instead collapse as economies overheat and interest rates return to the levels of the 1970s (I think this is very unlikely). Or demand may fall because all the job losses caused by the pandemic are not fully compensated for by stimulus (I again think this is unlikely, but customers still need to plan for this downside scenario).

What about China’s domestic petrochemicals consumption in 2021, its local-for-local demand?

One scenario involves China launching a big new domestic stimulus programme in the event of any economic slowdown. This could happen because this year is a politically sensitive year as it marks the 100th anniversary of the founding of the Chinese Communist Party.

But what about, as I discussed on Monday, rising income inequality and a rapidly ageing population? To what extent would a big new stimulus programme be successful given these long-term drags growth?

We must also consider China’s rising debts. As fellow blogger Paul Hodges wrote in this post, China’s debts grew from $2tr in 2002 to $39tr in 2020, as measured by Total Social Financing. Meanwhile, GDP grew from $1.5tr to $13.2tr, according to the National Bureau of Statistics.

Can China afford another big stimulus programme given this level of lending versus GDP? 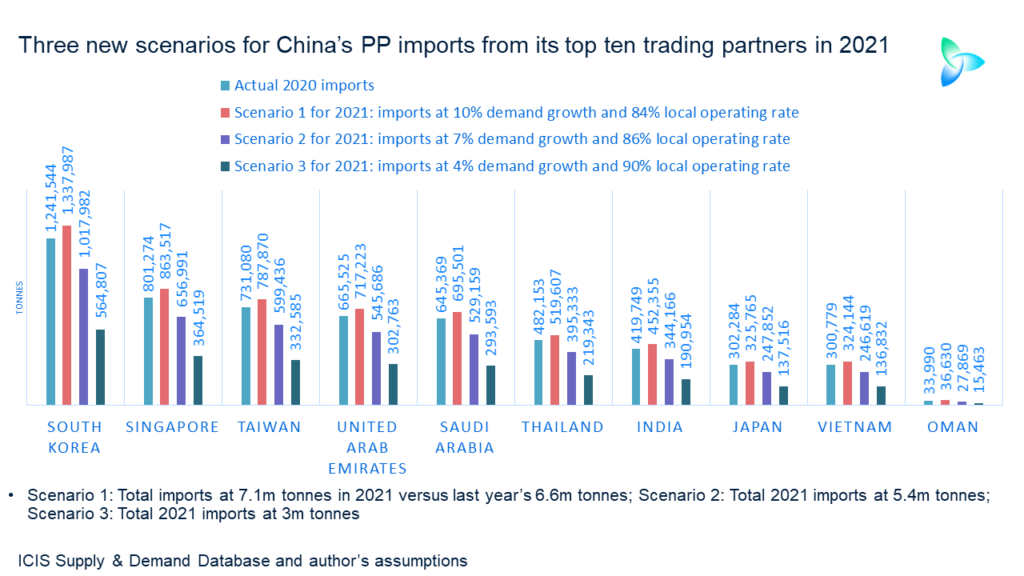 My first pass at estimates of China’s 2021 petrochemicals and polymers imports from key trading partners only considered one variable and this was local operating rates. I kept demand growth unchanged in each of my scenarios. These first estimates were published in January and February.

But in the new scenarios I provide today for PP imports in 2021, I have varied demand growth as well as operating rates to reflect all the above uncertainties.

China’s PP imports rose by an astonishing 26% in 2020 over the previous year to 6.6m tonnes. What was astonishing was that this jump occurred despite 2019 also being a strong year for import growth – and because local production rose by 10%.

PP’s apparent demand growth in 2020 was at an historic high of 13%, leading to consumption of around 32.9m tonnes.

Under Scenario 1 for this year’s imports, I assume that demand growth stays very strong at 10%. Local capacity is set to jump by 14% over last year to 35.2m tonnes/year.

But because of this strong demand growth – and assuming a local operating rate of 84%, which would be the same last year – imports would still grow to 7.1m tonnes/year.

Scenario 2 involves a moderation of demand growth to 7%, which would historically still be very good. But operating rates might reach 86%, the same as average actual operating rates in 2009-2019. Imports would fall to 5.4m tonnes.

My Scenario 3 assumes China runs its PP capacity flat out at 90% because its new plants are world-scale and well-integrated and thus have strong economics.

China might choose such a high operating rate (and remember, operating rates are a political as much as an economic decision) for supply-security reasons in a very uncertain geopolitical world.

Under this third scenario for 2021 PP imports, I also assume very low demand growth of 4%. China’s imports would fall to just 3m tonnes.

Just look at the difference these three scenarios would make in terms of imports from China’s top 10 trading partners. As usual, the above chart uses actual tonnes to make it easier to read.

To reach these calculations, I again assume that the top 10 trading partners win the same percentage shares of total Chinese imports in 2021 as they did last year:

The towering influence of China

As I shall detail in my slide on LinkedIn tomorrow covering styrene monomer (SM), the collapse in China’s imports under a worst-case scenario would be even more pronounced than in PP.

In 2020, we estimate that no less than 43% of total global net imports of PP went to China. In the case of SM, it was 69%. This was among the regions that imported more than they exported.

This serves to remind us of the towering influence of China for our industry and why we need to plan, re-plan and plan again based on different scenarios.

There are no important tasks for your planning department. For help on this scenario work, contact me at john.richardson@icis.com.