WHEN I WAS a boy in 1970s Britain, a new pair of shoes was an expensive proposition and so I had to make them last. Durable goods in general were costly relative to incomes, so many people rented televisions and had to save long and hard to buy new sofas.

But then bang, as economist James K Galbraith details in this Project Syndicate article, China became integrated into the global economy from the 1990s onwards and the relative cost of consumer goods declined. It is now common to throw a TV or washing machine away without even an attempt at repair. Most of us in the developed world don’t think twice about throwing away clothing that is still very wearable.

Professor Galbraith provides the essential historical context of how and why China became the low-cost workshop of the world, driving a wave of global deflation. China’s transformation into a manufacturing superpower was about creating jobs for a very youthful population. Heavy government subsidies for manufacturing enabled China to fully cash in on low labour costs resulting from a youthful population.

These are critical trends I have been discussing for 12 years on the blog, a discussion enabled by experts such as Professor Galbraith. He should know a thing or two as between 1993 and 1997 he served as chief technical adviser for macroeconomic reform to China’s State Planning Commission.

What history tells us is that Chinese manufacturing – oil, gas refining and petrochemicals through to finished goods – has never been about Western concepts of economics. Standard Western-centric measurements, including the cost curve concept in petrochemicals, have failed to predict China’s direction.

We can see from the history of China’s petrochemicals operating rates that plants have often been run hard, even in weak market conditions. This was to ensure sufficient raw materials supply to keep people in jobs in plastic pipe and washing machine factories.

The same linear Western thinking has been applied to China’s push towards petrochemicals self-sufficiency. The self-sufficiency drive – which gained important new momentum in 2014 – has been more about national supply security than the individual economics of plants.

The more that things change the more they stay the same. China’s government policies are changing because of its ageing population. But China still needs to prioritise employment.

Here is my summary of what this means for petrochemicals:

I am therefore with Professor Galbraith when he dismisses the idea that China will become an inflationary influence on the global economy. I see the “China price” being kept low by China and its partner countries. China will remain a deflationary force as it maintains its share of finished goods export markets.

We must crunch and re-crunch the petrochemicals data to estimate what this means for levels of Chinese self-sufficiency. There are few more important tasks given China’s dominant role in driving global imports.

To this end what follows are new scenarios for Chinese ethylene glycols (EG) and paraxylene (PX) imports in 2021-2031. 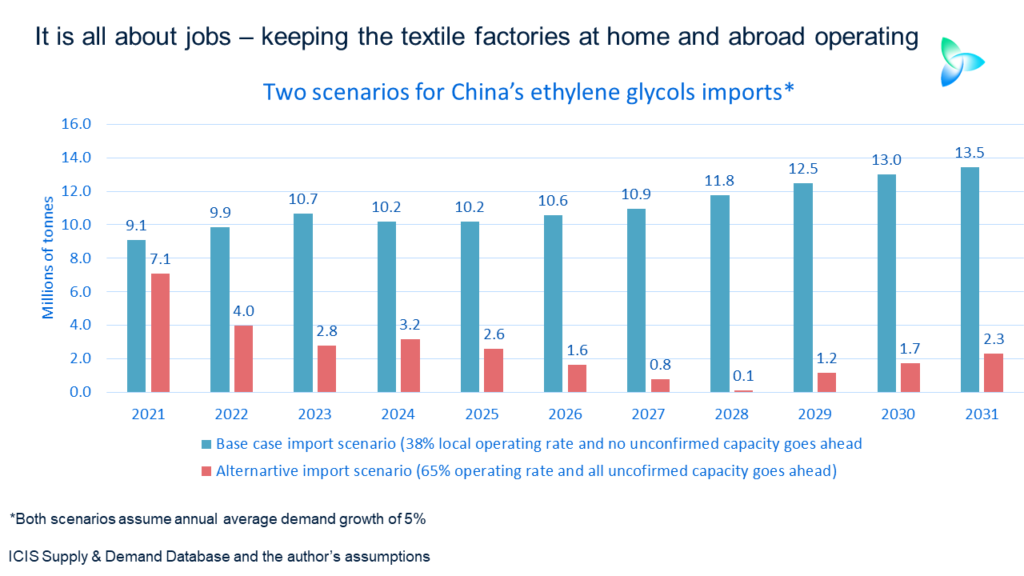 Your essential building block is the ICIS Supply & Demand Database. You should then access our experts to construct scenarios and stress test your business models under the scenarios.

Our base case for Chinese EG operating rates in 2021-2031 is just 38%. This might turn out to be right because 53% of Chinese capacity during those years is forecast to be coal-based. Coal-based capacity has been plagued with operating and cost inefficiencies.

But the inefficiencies are reportedly being overcome, again because of government policy. EG has been chosen as one of the key raw materials in which China needs to achieve much greater self-sufficiency.

So, let us assume for argument’s sake that 2021-2031 operating rates average 65%. This is still low enough to factor in some inefficiencies at coal-based plants, while assuming China’s cracker-integrated plants will run extremely well. China’s new cracker-based EG capacity is world-scale and well-integrated upstream into refining. It is also located at modern petrochemicals industry parks.

We list 36.8m tonnes/year of unconfirmed or speculative new EG capacity in 2021-2031. Because China is good at executing projects, it is reasonable to assume that all this capacity goes ahead.

Both scenarios assume our base case of 5% average annual demand growth in 2021-2031.

When you consider that last year China accounted for some 85% of total global net imports of EG, the downside risks are huge.

Let us consider what the impact could be on Saudi Arabia. Last year, Saudi Arabia won 38% of China’s total EG imports – 4m tonnes out of 10.5m tonnes. Assuming Saudi Arabia repeats this 38% share in 2031: 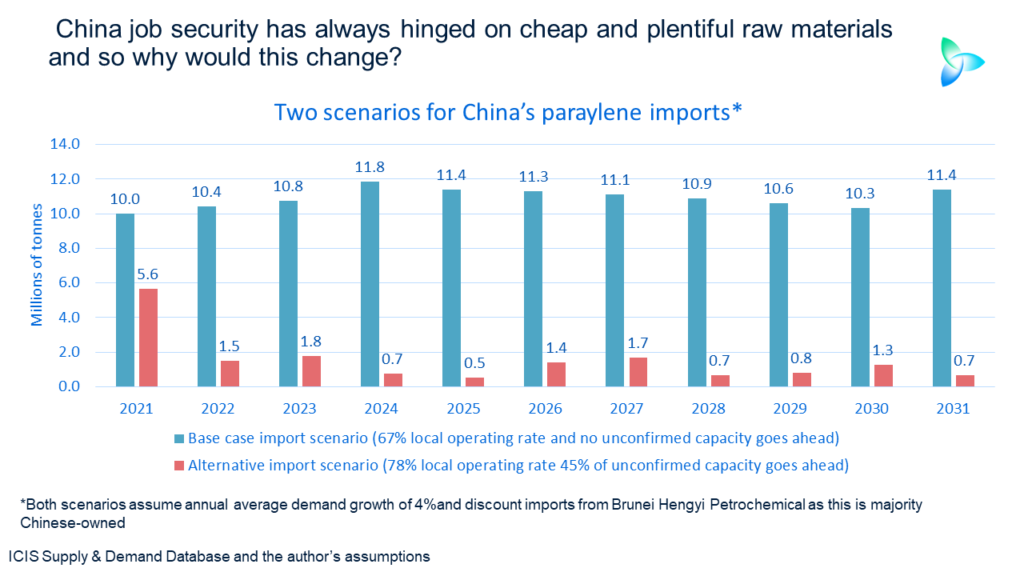 Our base case assumes a 67% average Chinese PX operating rate in 2021-2031. But here is the thing: our data show that last year’s operating rate was an astonishing highly 89% when you include imports from Brunei Hengyi Petrochemical – the majority Chinese-owned plant.

Trade data show that just about all the output from the Brunei plant was exported to China in 2020, so it seems safe to assume the facility is effectively a local Chinese one.

No less than 109m tonnes/year of unconfirmed China-located capacity is listed in our supply and demand database.

This seems way too much even for China to execute. If China did execute this amount of capacity, where would it sell the PX given that in 2020 we estimate that China accounted for 90% of total global net PX imports?

So, let me be more reasonable. My downside assumes 58% of the unconfirmed capacity happens – 62.9m tonnes/year.

Both the above outcomes for 2021-2031 imports again assume the same demand growth, in this case an average 4% per annum.

Both the import scenarios also include as part of local production the output from the Brunei plant, based on the 2020 imports from Brunei.

I see every chance that China will reach complete self-sufficiency in polypropylene (PP), styrene monomer (SM), EG and PX. Even the very modest EG and PX imports assumed in the above charts might therefore turn out to be overestimates.

It is also important to again stress that in the products where China cannot achieve self-sufficiency by itself, it will do so along with overseas partners. This will include, as discussed earlier, HDPE and LDPE in partnership with Iran. China and Iran will together also greatly increase China’s “virtual” self-sufficiency in methanol. Watch out for my later blog post covering methanol.

Time is running out for the old business model built around big volumes of  petrochemicals exports to China from northeast Asia ex-China, the Gulf Co-operation Council member countries, the US and southeast Asia.

PREVIOUS POST Iran may gain 48% of total China HDPE imports, 85% of LDPE imports by 2025 because of new deal
NEXT POST Petrochemicals demand and the pandemic: we continue to stumble around in the dark