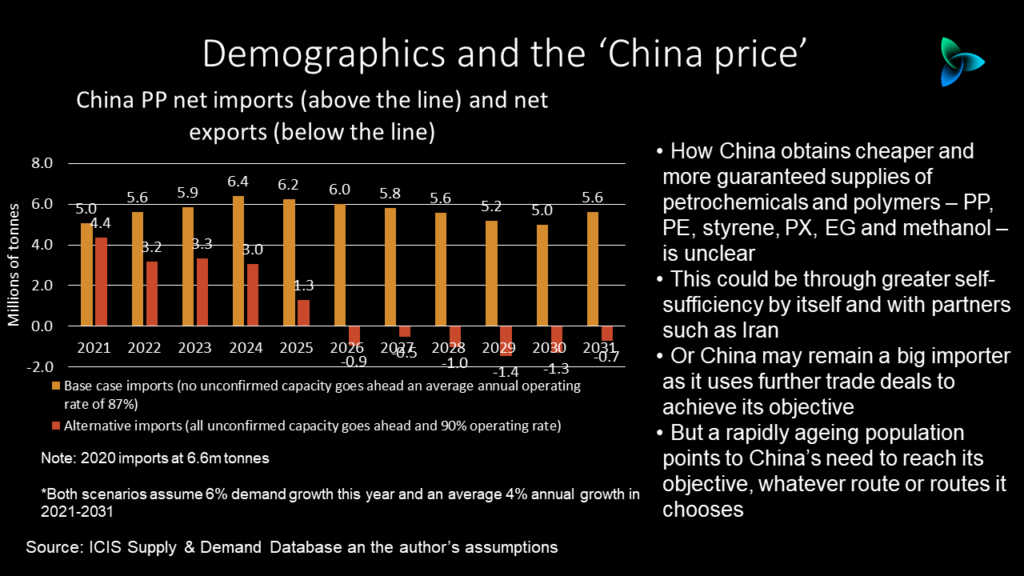 THE FEEDBACK I have received on my series of posts about the potential for rapidly rising Chinese petrochemicals self-sufficiency has focused on the detail.

“I don’t see China building that many new paraxylene (PX) plants because they are already long on gasoline, so they cannot keep adding refineries to supply the mixed xylenes),” one contact told me.

“When you consider that the maximum petrochemical feedstock output from any refinery is around 40% of a refinery’s total output, building lots more refineries doesn’t seem to me viable,” he added.

On the propane dehydrogenation route to polypropylene (PP), questions have been raised over the long-term global availability of propane given the Biden administration’s plans to restrict growth in the shale gas industry for environmental reasons.

If renewables take a bigger share of US energy production, we could even see a decline in US natural gas and natural gas liquids production.

What applies to refineries and the Chinese PX industry obviously applies to PP.  A lack of new refineries would limit the availability of further refinery propylene and naphtha feedstock to build more cracker-based PP plants.

That would still leave coal as another option and China has abundant coal reserves. But PP-to-coal complexes face the challenges of high capital costs, sometimes high running costs (which depends on the price of oil) and high environmental costs.

What has also raised queries are my assumptions for high future Chinese operating rates and additions of unconfirmed capacity.

I am based in Perth, West Australia. Even if the Australian borders were open, I would find it somewhat difficult to travel to every industrial site in China and check on the progress of each project and get all the necessary information on the status of financing, feedstock and approvals for unconfirmed projects.

Even for those based in China, these are very challenging tasks. Nobody has 20/20 vision on Chinese projects.

These are all valid points, of course.

But it is important to remember that when the Chinese government says it is going to do something, it tends to do it.

Beijing said in 2014 that it was going to push hard towards petrochemicals self-sufficiency for supply security and economic value-addition reasons. Since then, geopolitical uncertainty resulting from the split with the US has been thrown into the mix.

We have now reached the tipping point where we have enough potential steel in the ground for China to achieve close to complete self-sufficiency in PX, PP, styrene monomer (SM) and methanol.

In the case of PP, no unconfirmed projects (those without financing, feedstock and approvals) would need to go ahead in order for imports to see a sharp decline before 2025.

All that would instead need to happen is for local plants to run an average rate of 90%. Imports would fall to just 1.3m tonnes in 2025. This would compare with imports of 6.6m tonnes last year.

In partnership with Iran, China could achieve much higher levels of self-sufficiency in high-density PE (HDPE) and low-density PE (LDPE).

This would just leave linear low-density PE (LLDPE) pretty much unaffected, out of the petrochemicals in which China is a big importer. No matter how you crunch our data, it is hard to see how China can achieve much greater LLDPE self-sufficiency over the next 10 and more years.

The details of course matter enormously for petrochemical producers and buyers.

Producers in the countries most exposed to rising self-sufficiency (South Korea, Saudi Arabia, the United Arab Emirates or the UAE and Singapore etc) need every detail of every project and the ongoing implications for import volumes. This is what we provide at ICIS.

And they need to get on with developing new strategies built on sustainability together with higher value petrochemicals and polymer production to hedge against the risk of collapsing Chinese imports.

They also need more granular and frequently updated data on commodity petrochemicals export opportunities to markets other than China, even though these markets will realistically never fully replace a lost China.

As for petrochemicals buyers, they need to closely monitor the speed at which China moves towards self-sufficiency.

Based on the conclusions from our data, buyers should approach the companies in the countries most exposed with offers to take surplus volumes off their hands.

Looking beyond the details: the ‘China price’ will be cheap

Regular readers of the blog would not have been surprised by this week’s media commentary on China’s latest 10-year census. Since 2011, I’ve been warning about and comprehensively detailing the risks China faces from a rapidly ageing population.

The government’s response includes encouraging more migration from poorer provinces to richer provinces in order to increase the size of the export-focused manufacturing workforce.

But this could widen the wealth gap between the poorer and richer provinces, running counter to Beijing’s “dual circulation” policy.

Pension and healthcare liabilities are rapidly increasing. Liabilities are increasing as tax revenues decline because of the fall in the size of the working-age population.

China confronts the Catch 22 dilemma of the pressure to raise retirement ages from 60 for men and as low as 50 for women to boost the working-age population. This could reduce the number of vacancies for young people.

There are so many implications from China’s demographic problems it is impossible to cover all of them here, so I will return to this subject in later posts.

But at a headline level for the purposes of this post, I believe the demographics challenges will prompt China to continue with its policy of doing whatever it can to get obtain raw materials at more competitive prices.

My “starter for 10”: some scenarios on how China could get there

The phrase “starter for 10” comes from the old BBC quiz show, University Challenge. These were introductory questions and answers, worth 10 points, at the start of each episode.

So, please treat as follows my answers to how China will get there as only starting points for this important quiz or debate.

China is shaking the “big stick” of greater petrochemicals self-sufficiency at markets because of its potential for more steel in the ground and high operating rates.

Instead of building many more plants, it might choose to sign further trade deals with incumbent major exporters such as South Korea, Saudi Arabia, the UAE, India, Taiwan, Japan, Thailand and Singapore.

We must also consider the role of the Belt & Road Initiative in China’s search for cheaper raw materials, linked to which is offshoring low-value manufacturing from China.

The example I’ve quoted before (and this is just a theoretical example) is as follows:

On the theme of Iran, a gamechanger might be the Iran/China deal signed last month. The deal –involving a potential $400bn of Chinese investment in Iran including $280bn spending on oil, gas and petrochemicals – was under negotiation for six years.

When you study our supply and demand database, the two products that stand out where China could move much closer to self-sufficiency in partnership with Iran are HDPE and LDPE.

Oilprice.com reports that China has done a deal with Iran whereby it will obtain oil, gas and petrochemicals at prices 32% lower than prevailing market prices.

I again don’t have the faintest clue about the extent to which the Iran/China deal will be realised. Good market intelligence on Iranian and Chinese projects is needed if we are to reach any conclusions.

But demographics are economic destiny as they always shape growth patterns, trade flows and government policy.

China’s ageing population is therefore a very good reason to believe that the China price will be very different over the next 10 years, however China gets there.

Because of China’s push for cheaper raw materials, I believe we are heading from a world of petrochemicals inflation to one of deflation.