WHEN I worked for a UK local newspaper as a “cub” or junior reporter in the 1980s, there was a major international air crash. “Find out if there was anyone from our city on the flight,” my news editor instructed me. In my naivete, and because of lack of training, I was horrified. I thought that surely each life was as valuable as the next one.

But I was soon taught that while indeed every life should be equally valued, most news is local, that we better connect to events if the people involved are from our local communities. That’s how local newspapers used to make good money before the internet came along.

The thing about CO2 emissions, though, is that they don’t respect city, county, state, provincial or international borders. And yet the reaction to last week’s release of the International Energy Agency’s (IEA) latest World Energy Outlook report – ahead of the crucial COP26 meeting in Glasgow at the end of this month – was  in my view, depressingly parochial.

Now I could get myself into a lot of trouble here, so I am not going to link to the articles in question that led me to this view. Suffice to say to avoid trouble: the heavy focus of reports in the Western media on the IEA report was on the current energy shortages in the West, and on investments needed in capacity and storage to prevent a repeat of the crisis.

Most clean energy spending must be in the developing world

But for me, these were the paragraphs that shone  out from the IEA study:

“Getting the world on track requires a surge in annual investment in clean energy projects and infrastructure to nearly $4tr by 2030. Some 70% of the additional spending required to close the gap between the APS [the IEA’s Announced Pledges Scenario] and NZE [Net Zero Emissions by 2050] is needed in emerging market and developing economies.

“There have been some notable examples of developing economies mobilising capital for clean energy projects, such as India’s success in financing a rapid expansion of solar PV in pursuit of its 450GW target for renewables by 2030.

“However, there have also been persistent challenges, many of which have been exacerbated by the pandemic. Funds to support sustainable economic recovery are scarce and capital remains up to seven times more expensive than in advanced economies.

“In some of the poorest countries in the world, COVID-19 also broke the trend of steady progress towards universal access to electricity and clean cooking. The number of people without access to electricity is set to rise by 2% in 2021, with almost all of the increase in sub-Saharan Africa.”

There will be nothing new here for regular readers of the blog as I’ve been making very similar points since the pandemic began.

See below an updated version of the Our World in Data chart that I’ve been publishing for the last six months. 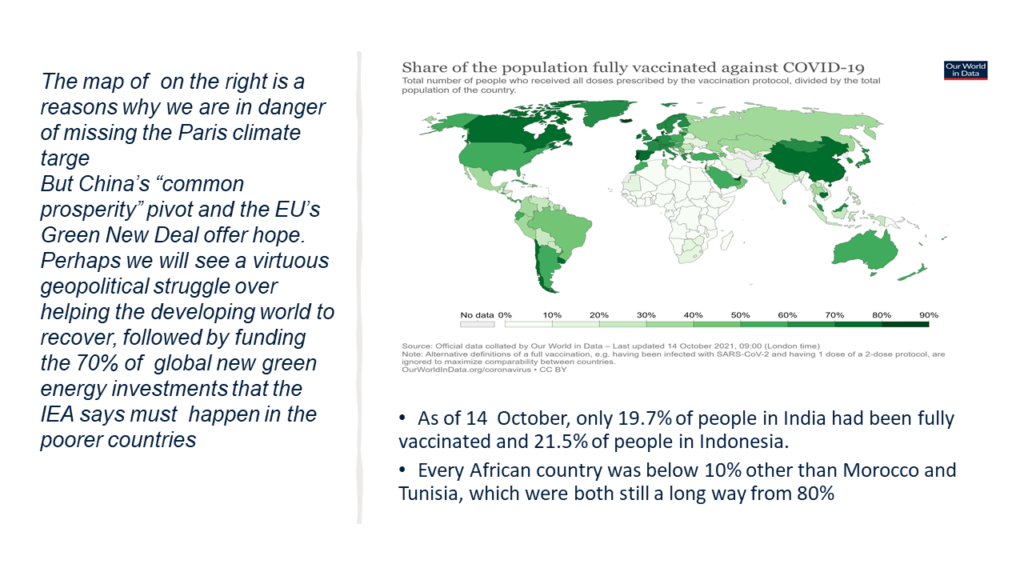 Getting the developing world on the right track

The first step towards fixing the crisis is ensuring sufficient vaccination levels. Then must come funding to build essential infrastructure, including, most critically for CO2 emissions, sustainable electricity generation.

As mentioned above, the IEA wrote that annual investments in clean energy projects and infrastructure had to rise to nearly $4tr by 2030 with 70% of the money spent in the developing world – triple its current level. On first glance this seems like a huge amount of money, but not when you consider the $20tr spent on global economic stimulus since the start of the pandemic.

I also believe that free markets by themselves cannot fix the crisis. We need a network of global carbon taxes and carbon border adjustment mechanisms similar to the one being considered by the EU.

A network of taxes would change the way people behaved, from the petrochemical producers down to the final end users. But the taxes would have to ensure that that the economically disadvantaged were protected.

China’s “common prosperity” could be the deciding factor

So far so bad. What I’ve detailed from the IEA report is cause for pessimism. But here, from the same report, is a shining gold nugget of hope:

“China’s announcement of an end to support for building coal plants abroad is potentially very significant: it could lead to the cancellation of up to 190GW of coal projects that are built in the APS. This could save some 20 gigatonnes in cumulative CO2 emissions if these plants are replaced with low emissions generation – an amount comparable to the total emissions savings from the European Union going to net zero by 2050.”

This underlines my argument that because China dominates the global economy, its actions have major implications for climate change.

China’s “common prosperity” policy pivot, as I’ve discussed in detail on the blog over the last five weeks, is a game changer in so many respects. I believe it is the most important event in world economic history since at least the Global Financial Crisis, if not earlier.

And if China follows through on the “common prosperity” commitments to reduce domestic carbon emissions, bang, we will go a long way to solving the crisis.

Plus, through its Belt & Road Initiative, which involves some 40% of the global population and most of the developing world, China policy pivot promises that its best green practices will be exported.

I must also stress that what’s happening in the EU offers tremendous hope, especially if technology and expertise developed through the region’s New Green Deal is widely exported.

This raises an intriguing and hopeful prospect: a geopolitical battle between China, the EU, and perhaps even the US, for influence in the developing world, using green development as a tool. This would be a major improvement on the proxy wars between the US and the Soviet Union in the developing world during the Cold War.

What this means for the petrochemicals industry

As I’ve also been stressing and as the IEA again highlighted in the report:

“The energy sector is responsible for almost three-quarters of the emissions that have already pushed global average temperatures 1.1°C higher since the pre-industrial age, with visible impacts on weather and climate extremes. The energy sector has to be at the heart of the solution to climate change.

“At the same time, modern energy is inseparable from the livelihoods and aspirations of a global population that is set to grow by some 2bn people to 2050, with rising incomes pushing up demand for energy services, and many developing economies navigating what has historically been an energy- and emissions-intensive period of urbanisation and industrialisation. Today’s energy system is not capable of meeting these challenges; a low emissions revolution is long overdue.”

As with energy, so with petrochemicals as the chart below reminds us, using ethylene equivalent demand as an example. This is the demand for all the polymers and other petrochemicals made from ethylene. 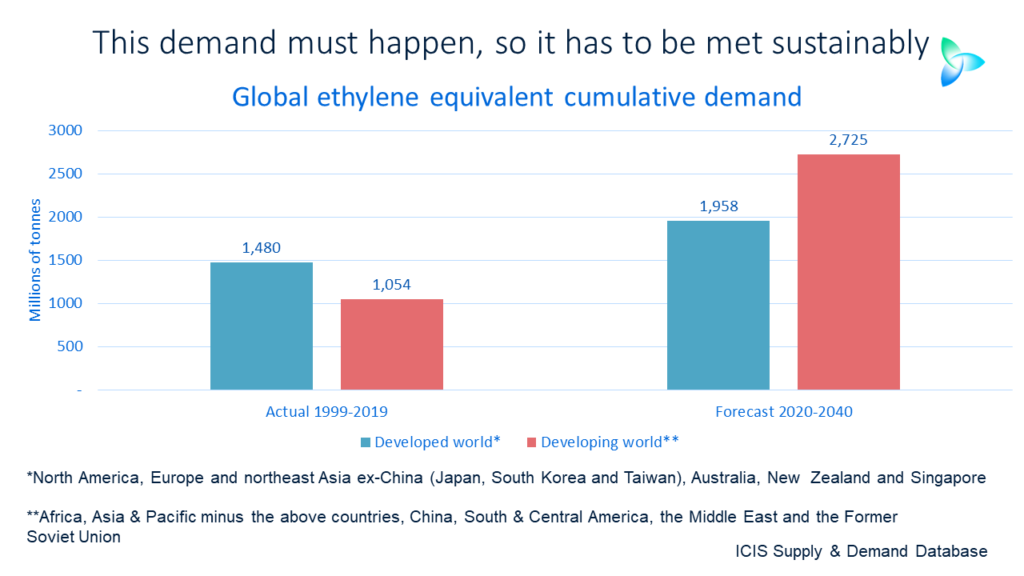 As you can see, demand in the developing world is set to rocket over the next 20 years whereas in the rich world it will only edge up. The ICIS Supply & Demand Database predicts a 159% increase in developing-world consumption between 2020 and 2030 as developed-world demand rises by 32%.

We should all want this growth to happen as it will be an indication that further battles have been won in the war against poverty.

There can be no replacement for using conventional petrochemical technologies to make all the goods and services that lengthen and improve the quality of lives, as recycling technologies cannot be scaled up to meet this kind of consumption growth in the foreseeable future. Plus, when it comes to chemicals recycling, there are major question marks over its levels of carbon emissions.

So, it is a question of, for example, turning oil refineries into bio refineries, building low emissions cracker and derivatives plants and retrofitting existing plants with technologies that reduce carbon emissions.

The opportunities are colossal. For instance, the IEA also wrote that there were major growth opportunities in the international trade of critical minerals such as lithium, cobalt and nickel and hydrogen-rich fuels such as ammonia.

Under the IEA’s APS scenario, the international trade of these important minerals and hydrogen-rich fuels would rise to 25% of total energy trade by 2050 from 13%. But under NZE, the increase would be to 80%, pushing oil, natural gas, natural gas liquids and naphtha etc shipments into the shadows.

Wow! Truly wow! Perhaps this will lead to another kind of virtuous cycle of competition, this time among Sinopec, PetroChina, Saudi Aramco, Petronas, Shell, ExxonMobil and Chevron etc for control of the international blue and green hydrogen market. Lots of money is there to be made as we fix the climate crisis.

This is a defining time for humanity. The IEA’S desired NZE outcome involves a rise in global temperatures 1.5°C above levels in the pre-industrial era, in line with the most-desired limit agreed upon during the 2015 Paris climate accord. The APS scenario would see a 2.1°C increase in temperatures. The Stated Policies Scenario would result in 2.6°C rise in temperatures. We don’t want to go there!

“The way ahead is difficult and narrow, especially if investment continues to fall short of what is required, but the core message from the WEO-2021 is nonetheless a hopeful one. The analysis clearly outlines what more needs to be done over the crucial next decade,” said the IEA.