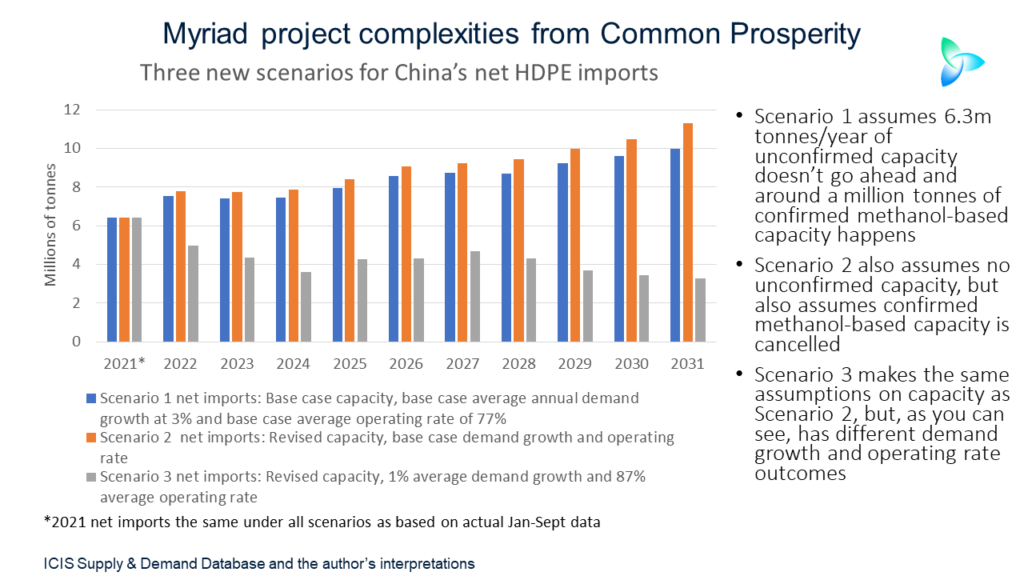 IF YOU THINK that forecasting the direction of China’s petrochemicals demand has become complicated enough because of Common Prosperity, the new complexities around demand pale into insignificance compared with the tangle of fresh variables shaping local capacity growth.

The above slide is just my back-of-the-envelope attempt to chart some of the new supply complexities. I am sure I have only scratched the surface and this chart should not be taken as anything like a finished product –i.e. adequate scenarios around which you can restructure your business plans. For information on how we can support your scenario planning via our analytics and consulting teams, contact me at john.richardson@icis.com.

As a reminder of why good scenarios on China’s capacity growth are essential for any export-focused global producer – look at the chart below on high-density polyethylene (HDPE), as HDPE is the main theme of today’s post.

China’s actual 8.9m tonnes of net HDPE imports in 2020, 66% of the global total, way overshadowed the estimated quantities imported by the other net import regions. 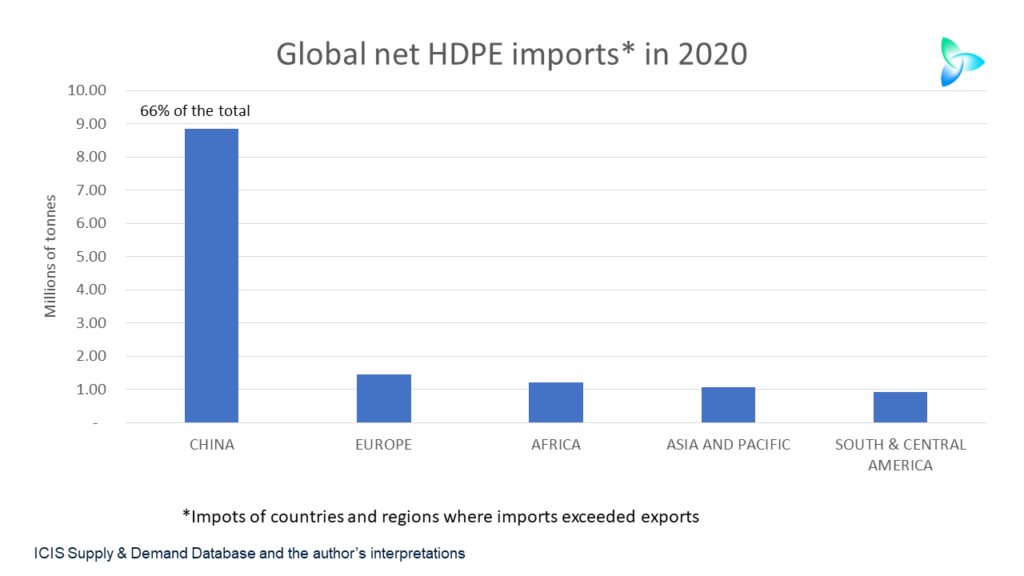 What applied to HDPE in 2020 applied to the two other grades of PE (China’s average global share across all three grades was also 66%) and other major petrochemicals, as the chart below indicates. 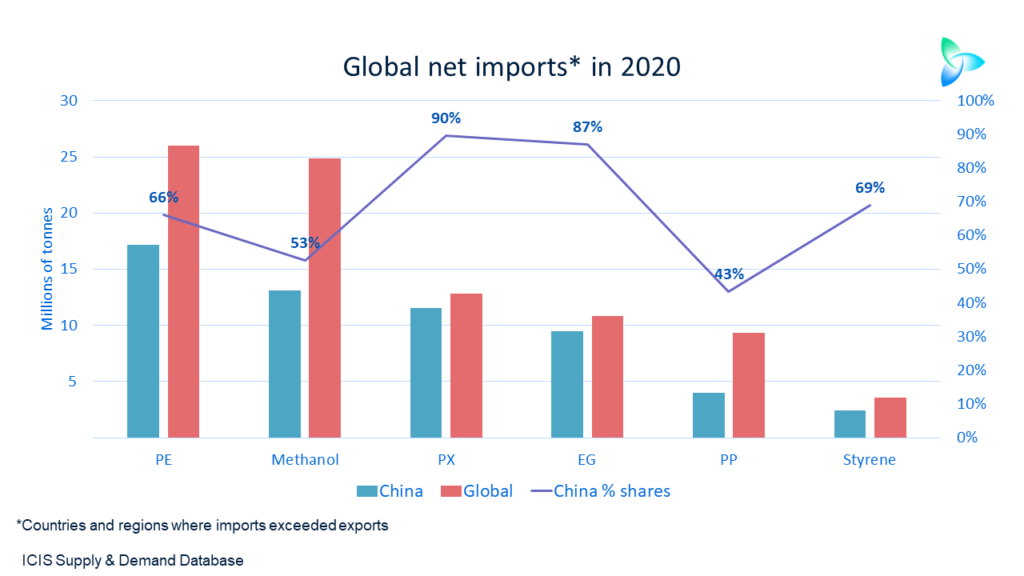 A key element of the Common Prosperity pivot – China’s biggest policy shift since at least 2009 – is reducing carbon dioxide emissions.

Since August, when Beijing began to put its foot more firmly down on the Common Prosperity accelerator pedal, provincial governments have been told to more aggressively reduce CO2 emissions.  This is part of efforts to fulfil two of China’s international pledges – peak emissions before 2030 and carbon neutrality by 2060.

China appears to be taking some of the pressure off provincial governments because CO2 cutbacks have contributed to coal shortages that are damaging short-term growth.

But in the long term, I see China continuing with an aggressive programme to reduce CO2 emissions as this is tied into two other aspects of Common Prosperity: reducing air, soil and water pollution, which of course will happen as the economy is decarbonised; lowering the “old style” investment intensity of the economy for economic efficiency reasons.

In the case of investment intensity, Common Prosperity is heavily focused on reducing reliance on the real estate sector for economic growth which accounts for a world record-high 29% of China’s GDP.

I believe that this will mean lower-than-commonly-expected demand growth for iron ore, steel, cement and petrochemicals over the next ten and more years. China’s GDP growth will, I think, remain strongly positive but each percentage point of growth will be achieved by lower quantities of extra demand for commodities than in the past.

I digress. On the subject petrochemicals supply, we could well see less approvals of new projects in order to again lower CO2 emissions and reduce the economy’s dependence on investments.

This me leads on to the assumptions in the three HDPE net import scenarios in the chart at the beginning of this post.

Scenario 1, our base case, assumes the 4.6m tonnes/year of unconfirmed capacity in our database doesn’t go ahead in 2021-2031. This is capacity where approvals have not been granted and where financing and feedstocks etc. are not available. This is a fair call given Common Prosperity and so I’ve assumed the same under all three scenarios.

Scenario 1 assumes our bases for annual average demand growth and operating rates – 3% and 77% respectively. A 77% operating rate would be historically very low operating rate, as capacity utilisation averaged 95% in 2000-2020.

In Scenario 2, I have kept to our base case demand growth and operating rate forecasts.

Not so under Scenario 3 where I have cut average 2021-2031 growth to just 1%, including a 7% decline in consumption this year this versus our base case forecast for a 3% reduction.

Why such a low growth estimate? Because China will make its economy less commodity intensive for the reasons described above, and because of increased restrictions on the use of single-use plastics as China tries to tackle another environmental problem –plastic waste.

China’s State Council announced on 24 October that new cracker projects of less than 1m tonnes/year would no longer be approved. I think this is pretty much academic as all the projects I could find in our database were at least 1m tonnes/year.

This indicates that China’s next wave of cracker capacity will be world-scale, as has been the cast with the last wave. New crackers are also expected to be well integrated with world-scale refineries sharing the same site.

Hence, I see China’s crackers running at pretty high operating rates because of economic efficiency with this in turn applying to downstream HDPE plants.

The State Council announcement included a requirement that refineries run at an average operating rate of 80% compared with last year’s 74%.

The State Council also said that refinery capacity would be capped at 1m tonnes/year by 2025. ICIS estimates that China’s operational capacity will reach 993.54m tonnes/year by end 2025. We see compound annual growth in refining capacity dropping to about 2% in 2021-2025, down by about 0.6 percentage points over 2016-2020.

Shouldn’t this mean less petrochemicals feedstock than had been expected, as several speculative refinery projects beyond the 1m tonnes/year cap won’t happen?

Not according to the people I’ve spoken to. They say that recent refinery capacity additions have been heavily focused on supplying petrochemical feedstock and they see this trend continuing.

Add this to higher refinery operating rates and contacts do not see feedstock availability limiting petrochemicals capacity growth, even though China is to shut some of its less efficient smaller refineries.

My choice of an 87% HDPE operating rate for 2021-2031 might turn out to be conservative as I’ve been told that Beijing, despite its Common Prosperity pivot, hasn’t all of a sudden abandoned its longstanding objective of reaching much higher levels of petrochemicals self-sufficiency. What’s change is that there is a a heavier focus than before on ensuring new assets have a lower carbon footprint and have stronger cost-per-tonne positions.

Now let’s look at the data in the chart on HDPE net imports in some detail:

What I haven’t considered here, but you need to consider, is the extent to which greater carbon efficiency requirements for China’s refineries and petrochemical plants may limit capacity growth. If new complexes must include technologies such as green and blue hydrogen, electric furnaces that run on renewable energy and carbon capture and storage, investors could be discouraged.

We can flip this the other way. We might see more enthusiasm for building plants because of government subsidies for green technologies and strong earnings from China’s new carbon trading scheme.

Here is yet another variable to consider: if China goes firmly down the green petrochemicals route, it seems likely that carbon import taxes will be imposed to protect local producers from “unfair” competition from overseas players with lower emissions standards.

Confused? As I said on Wednesday this week, I sincerely hope you are. Confusion, provided it is not followed by blind paralysing panic, will force you back to the drawing board. This needs to happen if we are going to make any sense of the radical changes taking place in China.

PREVIOUS POST China polypropylene demand growth continues to disappoint as new capacity uncertainties increase
NEXT POST After the COP26 disappointment, the "blame game" will get us nowhere