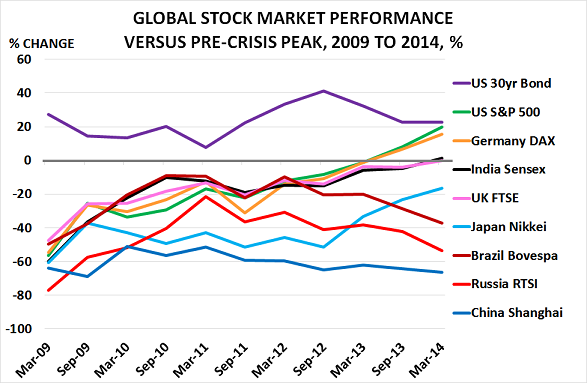 Coincidentally the blog began its 6-monthly review of global financial market performance on 7 March 2009, as the US market hit its post-Crisis bottom.  At this point, it was possible to hope that central banks would allow markets to resolve the issues that they themselves had created.

After all, there would have been no subprime crash if the US Federal Reserve and other central banks had not kept interest rates low from 2003 onwards, in order to create a property ‘wealth effect’ and boost consumer spending.

Unfortunately, central banks refused to accept the lesson they should have learnt, having seen financial markets crash.  Instead, they decided to double up on their failed policies and operate on a ‘shock and awe’ basis, as Fed Governor Charles Plosser confirmed last week.

The chart therefore compares developments in the major markets since 6 March 2009, in relation to each market’s pre-Crisis high, to see how successful they have been:

This is not a great result, given the $33tn of stimulus that has been spent since 2009.

Of course, US stock market investors have done well, as have bond investors till recently.  But most of the US population own very few shares.  As the US Senate Finance Committee has reported:

Equally worrying is that a major cause of the US markets rise has been record borrowing by investors.  Margin debt on the New York Stock Exchange has risen 160% over the past 5 years to an all-time record of $451bn – even higher that 2007’s peak of $381bn.

It would have been better by far if central banks had learnt their lesson from the financial market collapse of Q4 2008.  It was clearly essential that they acted as a ‘lender of last resort’ after having caused most of the financial system to freeze following their foolhardy decision to allow Lehman to go bankrupt.

Had they allowed markets to fulfil their role, policymakers would have been forced to confront the key issue, that ageing populations can never have the same growth rates as when they were younger.  Consumer sending is, after all, between 60% – 70% of GDP in Western countries.  And those aged 55+ already own most of what they need, and their incomes decline as they enter retirement.

But we don’t have that choice today.  Instead, we have lived in a dream world for the past 5 years.  Central banks pretended that demographics have nothing to do with demand.   And they argued that increasing asset prices would somehow power a recovery in consumer spending.

Picking up the pieces from this mistake will not be an easy task over the next 5 years.  Bond prices have recently weakened, as investors start to realise that it will be impossible to repay the debt that has been built up.  And the downturn in 3 of the 4 BRIC markets (Brazil, Russia, India, China), suggests that investors have begun to realise it is wishful thinking to hope these could somehow replace lost Western growth.

As we set out in ‘Boom, Gloom and the New Normal’, demographics drive demand.  Not even central banks can turn 55-year olds back into 25-year olds